Alex Parrish has a sleek new haircut, a young-professional pantsuit and a nagging suspicion that something very bad is about to happen: Yep, it’s time for Quantico‘s second season.

Sunday’s season premiere catches us up on what all of your favorite NATs have been up to since Simon’s Funeral of Sadness But Also Vindication (working title), and for the most part, everyone is thriving. Alex is a bored CIA analyst. Ryan is preparing to ask her to marry him. Even Caleb has found his equilibrium as a law student. But then those ol’ dual timelines kick in, and pretty soon we jump from ho-hum normalcy to First-Lady-about-to-be-beheaded-on-live-TV in the space of an hour.

How did we get here? Read on for the highlights of the Season 2 premiere, “Kudove.”

CIA YA REAL SOON | Immediately after Alex accepts Matthew Keyes’ offer to become part of the Central Intelligence Agency, we fast-forward to Alex walking around New York’s Financial District, looking worried. “I’ll be better when it’s over,” she tells Rayna on the phone. It turns out, she’s talking about meeting with Ryan — who’s now part of the President of the United States’ daily briefing team — to give him back an engagement ring. Wait, what? (For clarity’s sake, I’m going to refer to the Financial District siege as “the present” and Alex and Ryan’s time at the CIA as “the past.”)

The clearly no-longer-together pair are both there for a gathering of world leaders, who are meeting to consider putting an end to global surveillance. He’s working, she says she’s a civilian, but who even knows anymore? Alex and Ryan exchange some cryptic conversation, then he leaves to attend to POTUS. As Alex goes outside, she notices someone she thought was dead. How can she be sure, Shelby asks when Alex calls her (estranged? again?!) FBI pal? “I’m the one who killed him,” Parrish says.

NOT AGAIN | But even when the Bureau’s database says the guy is totally normal and really not dead, Alex’s spy senses won’t stop twitching — especially when a few unmarked white trucks enter the secure area near the summit. Just then, a series of what seem like coordinated explosions go off all around the Financial District’s perimeter, and a cadre of masked, armed people dressed in black swarm the summit and gas everyone — including Ryan, Rayna (who’s working as a translator), POTUS and FLOTUS — into unconsciousness.

The assailants call themselves the Citizens’ Liberation Front, they want pardons for global perpetrators of security crimes, and they’re prepared to unleash a biological agent if their demands aren’t met. Their masks are also scaring me for reasons I can’t quite pinpoint: They’re kinda Sleep No More meets Star Wars Captain Phasma, and I find them unsettling.

Alex finds them… in a trunk. Along with a bunch of other bad guy uniforms/voice changers/etc. But before she can figure it out any further, she’s attacked… by a very familiar face. (We’ll get back to this in a moment.) 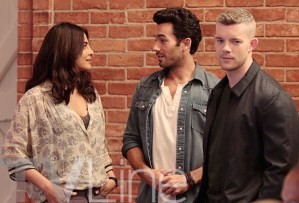 WHO INFILTRATES THE INFILTRATORS? | Quick postcard from the past: Alex and Ryan are together. Alex is unchallenged by her boring gig in the CIA basement. Shelby is still at the FBI, and she and Alex are living together. Caleb is enrolled at Berkeley Law School. Nimah recently busted a cartel in Arizona. Iris is kicking butt in Miami. Ryan is about to propose to Alex, but she gets a mysterious blue Post-It… then an even more mysterious call exactly at the time listed on the Post-It. Turns out, she’s been selected to test to be a CIA agent, and she has to go to a specific location RIGHT NOW TELL NO ONE GO GO GO.

So she makes her excuses — and leaves a disappointed Ryan to put the ring back in his pocket — and drives to the secret location… where she finds Ryan. And a bunch of other people. But Ryan’s the one we care about the most right now, because he and Alex are yelling at each other about how they can’t trust each other. But Miranda and Matthew Keyes show up quickly and, in a cramped and not cute dark room, inform the pair (who are both still FBI, by the way) that they have to infiltrate the CIA to find a group of rogue agents “with their own nefarious agenda” who are thinking of pulling a Liam O’Connor… but on a much bigger scale.

SECRET LOVERS THAT’S WHAT WE ARE | Of course, all this cloak-and-dagger stuff means that Ryan and Alex can’t let on that they’re dating. So when they meet the rest of the potential agents — a group that includes a brooding photojournalist named León, a pompous novelist named Jeremy, a jocular Brit named Harry and an eager actuary named Lydia — they merely cop to being former co-workers. Lying to people who have been noted for their abilities to finely read human behavior? What could be problematic about that?!

In the end, both Alex and Ryan make it through — him at the top of the group, her at the bottom, thanks to some heroics she tried to pull to save Lydia’s life during the skydiving task. But as it turns out, Lydia actually works for Owen (she’s already an agent), and none of them like Alex’s tendency to want to be the hero. Also? Owen is Lydia’s dad, but no one but us knows that right now. Oh, and if Alex winds up at the bottom of the “murder board” (way not to be dramatic, guys) one more time, she’ll be bounced from the program.

In their hovel of love later that night, Ryan and Alex bemoan that they can’t be together for the following six months, which they’ll spend at the CIA training facility known as The Farm. He shows her the ring and starts to pop the question, but she stops him, and who can blame her? That room looks like it’s two microbes away from a black mold outbreak. No girl wants a moldy proposal. “This’ll be the one place we tell each other the truth,” they promise. “And shag,” I add.

Later, all of the Farm newbies head to their dorms. Ryan and León are paired up, as are Harry and a new guy who’s religious. Alex’s roommate — who, like Harry’s bunkmate, is presumably from one of the two other groups who passed the test earlier that evening — is already in bed, and she’s weeping quietly.

WELL, THAT ESCALATED QUICKLY | Back in the present, Alex unmasks her attacker and realizes it’s Jeremy, the “millennial Tom Clancy” from her program. “You’re wrong about a lot of things, aren’t you?” he says, mentioning that she can’t stop what’s begun. Then he jumps out of a window, presumably to his death.

Back in the room full of hostages, POTUS pardons the first criminal and thinks things will be totally fine in the aftermath. Seriously, dude? The terrorists reveal that they have undercover operatives in the crowd, then move forward with their next objective: to behead the First Lady on camera. Just as the blade is about to fall, the screen cuts to black.

Now it’s your turn. What did you think of the premiere? Grade the episode via the poll below, then hit the comments to elaborate on your thoughts!