Need to catch up? Check out the previous Pitch recap here.

Americans, the next time you entertain the notion that your vote doesn’t matter, remember Pitch‘s Ginny Baker and the Major League Baseball All-Star Game.

Even though Ginny has been playing for the Padres for all of five minutes and isn’t on the official ballot, in this week’s episode a massive online campaign (36 million names on a petition!) lands the female ballplayer a coveted spot in the summer classic. #PutHerInTheGame, indeed.

Read on for the play-by-play of “The Break.”

YOU CAN DO IT, PUT YOUR BACK INTO IT | Mike and Amelia? Still a thing. And the reason we know this is because we watch as he puts his pants on gingerly, thanks to an increasingly tight back, while she watches from the bed. She suggests that he skip the All-Star Game. He scoffs and insists he’ll be fine. “I don’t know much about baseball, but I know it’s bad form to play an All-Star Game without pants,” she shoots back. She floats the idea of him sitting out the action and trying his hand at post-game analysis; as it turns out, she can help him get a gig. After a few more painful moves, he relents.

HEY NOW, YOU’RE AN ALL-STAR | Meanwhile, Ginny is dreading her mother’s impending visit, which will coincide with the All-Star break. She moans about it to Evelyn, who is in too good a mood about her family’s upcoming vacation: Because Blip didn’t make the team, they’re going to finally have the time to take the kids to Disney.

Mike calls Blip while Ginny is at the Sanders’ place to give him the good news: Because Lawson is dropping out, Blip will likely get the Padres’ All-Star spot. Everyone celebrates! Woo!… until Ginny gets the call that she is going to represent her team at the big game. Ginny feels bad. Blip says it’s OK. Ginny? It’s not OK.

DINNER DRAMA | Know who else isn’t psyched about Ginny’s All-Star debut? Her mom, Janet, who now will have next to no time to spend with her daughter during the trip. Ginny invites Amelia and Mike to dinner, each without the other knowing, so she’ll have some buffer to ease the strain between her and her mom. (Side note: Mike passes up the perfect opportunity to tell Ginny about him and Amelia, so I shall grant him no sympathy when this whole thing gets awkward, and you know that’s coming very soon.) But Mama Baker has a surprise of her own: She’s been dating a guy named Kevin, and she’s brought him to the restaurant, as well. 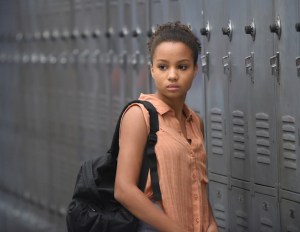 Ginny is super cold to her mom and her beau, whom we learn is recently divorced. And the pitcher’s bratty attitude is confusing for a while, especially given that the episode’s flashbacks paint Mama Baker as a warm, caring confidant and a foil for Papa Baker’s tough love. But then we learn that just as Ginny was racing home from school to (maybe?) tell her mother that she wanted to give up baseball for a normal school experience, she walked in on her mom and Kevin — both of whom were married at the time — canoodling in the kitchen.

But let’s push all that aside and deal with the fact that I’m freaking out that EDDIE FROM FAMILY MATTERS IS PLAYING GINNY’S MOTHER’S BOYFRIEND?! Are you guys OK with this? (Please answer in the comments and help me feel less alone/old.)

MAKING NICE WITH MOM | In Orlando, Blip is playing with the kids when he gets notice that he’s been added to the All-Star roster thanks to a last-minute pull-out. He’s incredibly psyched; Evelyn, less so. When he lights into her for not sharing the happiest moment of his life, she gives an epic speech about how she’s been the smiling baseball wife for most of their life together, so he should give her half a minute to be disappointed about their vacation going up in flames. (Side note: Meagan Holder is good, guys.)

So Blip flies back for the game, which is awesome and all, but Ginny lets up a homerun and her mom and Kevin never show up, despite Mike giving them his tickets. Later, a frosty Janet explains her absence by saying she was driving Kevin to the airport. The two women quickly get to the core of their hurt relationship: “Losing your father was incredibly painful, but it happened a long time before he died,” Ginny’s mom says, tearing up. “Losing you was the most painful thing that ever happened to me.”

Ginny sees the hurt in Janet’s eyes and says nothing about seeing her in the kitchen with Kevin years before. “I was young,” she says instead. “I didn’t realize how hard it was for you.” The chill fades a little as they make plans to have breakfast together in the morning before Mama flies home.

Oh, and Blip scurries back to Orlando ASAP after the game to crawl into bed with his wife and whisper that the day he met her in college was the actual best day of his life. Aww.

MEET THE NEW GUY | Turns out, Mike isn’t great at on-camera baseball analysis. (Side note: I’d argue, much like Amelia later does, that on-camera stuff is hard for anyone the first time out.) But he says some true stuff about how baseball is a game of inherent failure, then some nice stuff about Ginny, and then — probably freaking out that he’s not good at his Plan B career and knowing that his knees won’t allow him to do his Plan A one for much longer — he gives a real-time reaction to the breaking news that San Diego has just hired a hot young catcher: “That guy’s not taking my job.”

A little more about that catcher, whose name is Levon: He recently defected from Cuba, he’s real good and he turned down a more lucrative offer from the Yankees after Oscar promised that signing with the Padres would ensure that the right kind of people would be looking out for him and his career. There’s also a bit with a severed and shorn baby doll’s head that Oscar hucks at the younger man’s skull, but the less said about that, the better.