The Padres phenom not only gets revenge on a pitcher who dinged her teammate, she also picks a fight with an entire Major League Baseball team, which leads to a bench-clearer and an unceremonious ejection from the game. How you like them nectarines?

Speaking of grit, Al proves he’s more than a pretty face by figuring out a clever way to save his own job. Is it wrong that the crusty old team manager is quickly becoming my favorite character in the show?

Read on for the play-by-play of “Beanball.”

LOVE AND BASEBALL | Let’s start this week’s recap with the backstory, which — as has come to be this series’ way — is delivered in flashes throughout the hour. We watch Ginny get hit on by another minor leaguer named Trevor, but she rebuffs his advances for a while, citing her personal code of not dating other ball players. But he eventually wears her down by citing his plan to leave the game in the near future, and a hot makeout session up against a car leads to a cozy date at the driving range. He then asks her to come to his game, like the wives and girlfriends of the other players, and she balks… but winds up in the stands, cheering for her man anyway.

That is, until after the game, when she learns he’s been traded to the St. Louis Cardinals’ Triple A team and is on track for a start in the big leagues. She’s mad that he acted like he was done with baseball when he knew he was being scouted and had considered switching teams. And just like that, their minor league love affair is over.

THE MORNING AFTER | In the present, Amelia wakes up in Mike’s bed following their hotel-bar hookup, and while it’s not the most awkward post-coital interaction that ever was, they’re about as warm to each other as people forced to share breathing space on a crowded morning train. “Ginny’s a big girl,” Lawson tells Amelia, but the agent wants to keep their night together hush-hush, because “She still carries your rookie card and had your poster on her wall.” 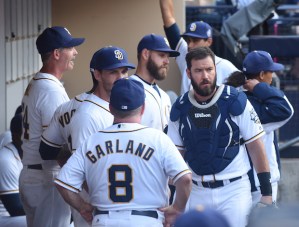 UNFINISHED BUSINESS | In the Padres’ clubhouse, the pitchers are all atwitter because Tommy is about to come off the disabled list, meaning another one of the hurlers will be sent back down to the minor league. Meanwhile, this week’s opposing team is the Cardinals, and their pitcher hit Tommy last season, breaking his hand and taking him out of the action for quite some time. As Ginny tells Mike while he gets a pre-game rubdown, she wants to get revenge (meaning she’ll ping one of the Cardinals’ players with one of her pitches). “A Wiffle ball would hurt more than any pitch you throw,” he points out, but I’m distracted by the state of his knees: I’m pretty sure Lawson is being held together with KT Tape and charm.

Meanwhile, Al knows very well that he’s likely going to lose his job sometime during that day. He tells Buck — the logical choice for interim — that he doesn’t mind him taking over as manager when he leaves, but he’s just not ready to go yet. And then Al gets himself thrown out of the game even before the players are announced. Hmmm…

RETRIBUTION | When the Cardinals pitcher almost hits Blip, Ginny is ready to brawl. “Don’t even think about it,” Mike warns her, adding that there are other ways to exact vengeance. Of course, she ignores her captain, throwing the ball right at the pitcher when he’s up to bat. And per the unwritten law of the sport, when it’s her turn at the plate, she’s gonna get hers.

While Amelia and various members of the Padres team want Ginny pulled from playing the rest of the game — to keep her safe — Baker maintains that this isn’t her first “beanball” feud and she’s ready for whatever comes. (The moment when Buck correctly guesses that it is her first beanball feud is a nice, comedic touch.) So she stays in… and that’s when another pitcher, nicknamed “The Mountain,” is called from the bullpen. Gin, I don’t mean to scare you, but the last time I recapped a fight that included someone named “The Mountain,” it didn’t go so well for the other guy.

FIGHT NIGHT | But it soon becomes clear that The Mountain is purposefully throwing way outside the strike zone in an attempt to completely avoid hitting Ginny. Also? The Cardinals catcher is Trevor. Both of these facts enrage her. “Are you afraid of hurting me?!” she yells. “Hey, what’s a girl gotta do to get beaned?” And when she starts slapping at Trevor, both benches empty and IT’S ON!

When the scuffle is busted up, both Tommy and Ginny get tossed from the game. But he seems to respect her a bit more now, so that’s something? But the good times are short-lived: After the game, Trevor apologizes for how things ended between them but also lets Ginny know that he recently got hacked… and those “selfies that we took on the road” that he deleted from his phone were backed up in the cloud, meaning there are nudie shots of Ginny that are likely in nefarious hands.

But Mike ends the episode telling Baker “you kinda blow me away,” so there’s that.

AL ABIDES | In case you were worried about Al: He invites Maxine, one of the Padres board members to join him for a decadent meal in the clubhouse, where he makes the case for keeping his job. He says that firing him now will make it look like Ginny had a hand in the move — thanks to his blockhead comments to reporters in the previous episode — and fans will start to hate her. “She’s a good kid. She’s contributed to this team,” he points out. “And I happen to like her.” Instead, Al wants to finish the season and retire.

So Maxine puts some pressure on team owner Frank, who then informs Al that his job is no longer in jeopardy. The sanguine manager thanks him, then effortlessly speaks Korean to the poor pitcher who’s getting sent back down to the minors. “People who underestimate me tend to be surprised,” he says to a gobsmacked Oscar by way of explanation.