Anyone else think Ryan Lochte watched this week’s Law & Order: SVU and thought, “See? It could be so much worse“?

The procedural’s latest installment takes us into the life of an elite athlete who makes catastrophically poor choices, is sexually assaulted — and then things start to get really bad.

Meanwhile, Rollins’ bad penny sister returns, and something vague yet ominous is going on between Benson and Tucker. Read on for the highlights of “Heightened Emotions.”

LEAP AND THE NET WON’T APPEAR | We meet a woman running aggressively on her treadmill at home as her young son and husband watch; later that night, the same woman is drunk and all dolled up at a Manhattan hotel bar. A bearded guy letches over and flirts with her. Cut to the woman, her dress ripped, taking a running jump from the roof of one building to the roof of another. When the police find her, she’s sprinting around (the Meatpacking District, maybe?) barefoot, screaming, “I won!”

The woman’s injuries and overall bloody nature seem to indicate that the woman, whose name is Jenna Miller, was raped. But she doesn’t say so… until her concerned husband shows up. Very long story short: Benson and Rollins show up at Jenna’s house, where she admits that she acts like an escort from time to time as a way of blowing off steam. But she’s not worried about solicitation charges: She’s worried that her hopes of making it to the 2020 Olympics are about to die.

I WANNA SEE YOU BE BRAVE | Jenna is a world-class pole vaulter who only missed making the Rio games because of a technicality, and she doesn’t want to go public with her rape because she’s worried she’ll lose everything. But after the squad finds out that Jenna’s attacker has done the same thing to a dozen other women in the past — and after Jenna’s agent drops her for having values that don’t match the firm’s and after Jenna’s husband thwarts an attempt to get Jenna’s rapist confessing on tape — Benson gives her the comforting/convincing power eyebrow and she figures she’s got nothing to lose.

Side note: Kudos to Theo Stockman, who plays Michael Wheeler, aka Jenna’s attacker: He is eminently punchable throughout the episode, and it’s tough to convey that much menacing ugh-ness in only a few scenes. Anyway, when the two parties confront each other in court, Michael’s lawyer is even more hateable than he is, and he goads Jenna by implying that she only cried rape after his client said he didn’t like her body.

This causes Jenna to tear her blouse off in court, in order to show everyone how wrong the lawyer is about her body. Of course, this is not cool — and as Barba whips off his jacket and attempts to cover his witness, he asks for a recess.

VINDICATION | Carisi and Rollins later find Jenna and her husband going through an intense workout at a local track. “You all think I’m crazy,” Jenna says. Carisi, who apparently went to medical school during the commercial break, replies, “No, you have a mental illness.”

And, as it turns out, she does. Jenna is diagnosed as bipolar, something to which a psychiatrist testifies in court, and now that she’s medicated and a much more credible witness, Michael’s lawyer wants the athlete nowhere near the stand. They cop to Assault II, which won’t put the waste of space on the sex offenders list, but will allow Jenna and her husband to put the incident behind them and move forward with their lives — which are now focused on helping Jenna mange her issues instead of qualifying for the Tokyo games. 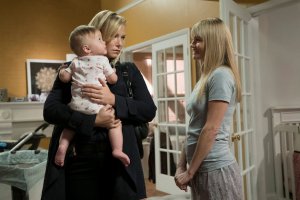 SISTER WRONG | Rollins’ terrible and life-blowing-up sister, Kim, has found religion and made parole, and she’s asking to move in with her sibling to avoid having to live in a shelter. “I know it sounds crazy. I should say no,” Amanda tells Olivia, who is thisclose to putting one hand on each of Rollins’ petite shoulders and SHAKING HER UNTIL SOME SENSE FINDS ITS WAY INTO THAT BLONDE NOGGIN. Instead, Benson merely states the obvious: “If you cover for her again, I will take your shield.”

Throughout the episode, Amanda is tough on her sister — which I get, but it’s hard to watch. Thankfully, Kim actually seems to have made a turn for the better: When Rollins catches her taking medicine at the end of the hour, she freaks out and demands to know what she’s on. But, as it turns out, it’s merely medicine prescribed for the bipolar disorder — what a coincidence! — with which she’d been diagnosed in jail. “I’ve been on meds for a year,” she says. “You didn’t tell me,” Amanda says, already feeling a little mean about the whole thing. “You didn’t ask me,” Kim responds.