A terrible guy gets some less terrible (but still pretty morally gross) women to sleep with him by lying to them: Is it rape? As this week’s Law & Order: SVU explores, the answer depends on whom you ask.

Read on for the highlights of “Imposter.”

TALK ABOUT AN ENTRANCE EXAM | Moments after sending her husband and teenage son on a college visit — “Oh, and don’t forget to mention your three-week seminar in Nairobi!” — a rich Manhattan housewife gets in touch with her lover and meets him for a quickie. Soon after he leaves, she texts him twice: Once saying they’d had the “best sex ever” and once (10 minutes later) saying that he’d raped her. What?

Rollins, Fin and Carisi come on the scene after the woman, Laura, overdoses on pills. At the hospital, Laura’s husband is beside himself when he learns about the other man. “We were happy,” he says, shellshocked. “At least, I thought we were.” A rape kit confirms sex but does not indicate violence, and Laura’s in a coma, so she can’t shed any light on the matter.

A conversation with Laura’s son reveals that she was a hovering, overbearing mom who really, really wanted her kid to attend the prestigious Hudson University. (Side note: GOOD GOD, WHY? After 18 seasons of the SVU team visiting that hellish institute of higher learning, I’m surprised that place hasn’t been shut down for hazardous conditions. Remember when Olivia said Noah would never go there?)

A TERRIBLE REALIZATION | So Laura’s been sleeping with a guy who she thought was the director of admissions at Hudson… except he’s really a campus security guard who works in the department. “Have you Googled him or looked him up?” Olivia asks, and when the New York City Police Department is taking its cues from Catfish: The TV Show‘s Nev and Max, we are at a low point, indeed.

Turns out, Laura found her bed buddy on Instagram after she hooked up with him the last time — in those 10 minutes between texts — and then felt so bad about herself, she took too many pills. And she only slept with the guy because she thought it would help her smart-but-not-remarkable son get into the school. Oops! “So you didn’t know the true identity of this man, which means you never consented to having sex with him,” Olivia says, her wheels clearly turning.

DIFFERING VIEWS | But not every member of the squad is on board with charging the guy with rape. “I mean, back in the day, I pretended to be Melly Mel’s cousin” to get some action, Fin points out. “I think it’s disgusting, but where do you draw the line?” Rollins muses to Carisi. And when they find the guy — named Tom Metcalf — and bring him in, he’s unrepentant about his manner of luring ladies. “If you ask me, it’s a brilliant strategy. Like taking advantage of the tax code. You finda loophole, you exploit it,” he brags to Carisi. And though the four other Hudson-hopeful moms he duped feel stupid for sleeping with a schmoe instead of a power player, none of them want to press charges. “We were two adults playing a game, and the hustler got hustled,” one says. Still, Laura’s willing to press charges, so Benson has Tom arrested. 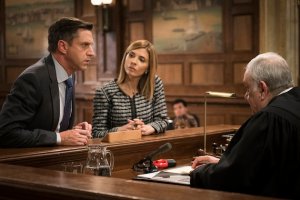 THE SINS OF THE MOTHER | There’s a whole bit with Tom’s high school pal getting involved in the case, but it ultimately doesn’t matter: The judge thinks that Barba is pushing an agenda — given that there’s no actual law saying you can’t pretend to be someone else in order to get someone to show you their nether regions — and strongly suggests that the lawyer back off. So with Tom’s own attorney admitting that her client is “disgusting, [but] not a rapist,” the sleaze’s charge gets knocked down to criminal impersonation in the second degree: a misdemeanor.

When Benson goes to break the news to Laura, she comes upon an horrific scene. As first responders mill about, Laura sobs over the body of her son… who has succumbed to the pressure thrust upon him — and the shame of his mother’s actions — and jumped from the family’s brownstone to his death.