Vice President Joe Biden swings by this week’s Law & Order: Special Victims Unit to congratulate Olivia and the unit on their work freeing a man wrongly convicted of sexual assault. The veep is there to draw attention to the national rape-kit backlog — a worthy cause — but given the way the hour ends… perhaps it’s a good thing Biden hops on Air Force Two well before the episode gets underway, eh?

Read on as we review the major action in “Making a Rapist.”

HISTORY REPEATING | The hour opens with Biden addressing a press conference at the precinct, saying that the time lag in testing rape kits fails “so many women.” But he cites the work of “my friend here, Lt. Olivia Benson” in cases like a recently exonerated New York man who was freed from jail after 16 years when an untested rape kit in Detroit proved he was wrongfully convicted.

The man, Sean, is there — as is the woman who accused him, Melanie, and her adult daughter, Ashley. After the press conference, the trio surprise Olivia by mentioning that they’re all friends; Sean is even going to come to Ashley’s upcoming wedding. But later that night, Fin and Rollins are called to Melanie’s house: Ashley has been raped, strangled, bleached, burned and a few other terrible things… though she’s still alive. To make matters worse, Melanie is pretty sure that she heard Sean’s voice in the house before the attack.

UP ON THE ROOF | The unit is, understandably, hesitant to haul Sean in for questioning, what with the whole making-a-giant-mistake-that-ruined-his-life-back-in-the-day. But when they learn that he’s asked a friend to lie about his alibi, and that Ashley’s fiancé hates him, Sean starts looking rather shady. And then, Ashley dies.

A look through Ashley’s social media accounts points the SVU gang to a weird neighbor guy who likes to hang out on his rooftop, smoke weed and do unsavory things like stare at Ashley through her bedroom window. The guy’s name is Charlie, and I blame him directly for me having to Google “Coney Island white fish” after Carisi says he finds one in the kid’s hidey hole on the roof. (Ick. Also, don’t Google that. It’s not lose-your-lunch gross, but you could live your life not knowing what it is.)

(You’re Googling it right now, aren’t you? Go ahead. We can wait.) 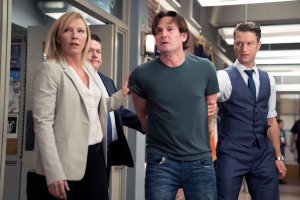 STAR WITNESS? | Charlie tells Rollins and Carisi that Ashley “definitely liked to tease him,” but it soon becomes clear that Charlie is not 100 percent there, and that he is easily swayed by the perceived attentions of the fairer sex. Though he is in possession of the bloody kitchen knife used to kill Ashley, he’s soon ruled out as a suspect: Charlie’s girlfriend has video of them having sex at the time of the murder. Lovely.

Rollins shows Charlie a photo of Sean and asks him if that was the man he saw leaving the murder scene. Look, absolutely everything I know about our legal system I learned from this franchise, and even I wouldn’t depend on this twitchy kid to be a crucial witness. But when Charlie says yes, Sean’s their man, Rollins and Carisi take him at his word. (Side note: Someone in the writers’ room lurves Kelli Giddish, based on the sheer number of times Rollins is described as pretty or attractive during the episode. I mean, they’re not wrong, but no need to rub it in for us normals, SVU writers.)

And when Fin finds Ashley’s engagement ring in Sean’s sink drain, the cops bring him in. Sean’s lawyer is quick to hint at a frame-up. “I know what it’s like to be raped!” Sean yells, claiming he could never do that to his friend. “I went in when I was 18, 140 lbs. What do you think happened?” Oof.

JUSTICE? | By the time we get to court, it’s looking more and more like Sean did it — blood on his shoes, etc. But when Charlie’s testimony falls apart like a post beer-pong game of Jenga (“I thought she wanted me to say it was him,” the idiot says about Rollins and Sean), the burden of convicting Sean once more falls upon Melanie.

Ashley’s mom refuses to testify, saying that she was absolutely sure it was Sean who attacked her all those years ago, and she was wrong. What if she’s wrong about hearing his voice in the house on the night of the murder? So Barba compels her to testify, treats her as a hostile witness and gets her to admit that the reason she’s hesitant to say Sean was in the house is because she feels guilty for sending him to prison in the first place (and therefore turning him into the rapist and murderer he is). When she finally crumbles and agrees, Sean’s lawyer cops a Murder II plea with the caveat that he address the court and say what really happens.

So he does. And it’s awful. Basically, Sean got drunk and told Ashley that he liked her. When she laughed at him, he raped and killed her, then bleached and burned her to destroy the evidence. “I didn’t want to do it,” he tearfully admits. “It just happened.”

Outside the courthouse, Melanie sadly notes, “At least I know he did it this time.” When Benson assures her it’s not her fault, the grieving mom asks, “Then whose is it?”