Mindy, you’re a doctor, so why don’t you do the honors: Please call a time of death on my love for Dr. Daniel “Diamond Dan” Castellano.

Because all of the affection I felt for the booty-shaking, grandpa glasses-wearing, funky ale-brewing, commitment-fearing, nude photo-posing, lasagna-crafting Dr. C is snuffed out for good in The Mindy Project‘s Season 5 premiere.

I’m rather sad about this development. I didn’t start watching the comedy thinking it would provide a love story to root for, but then the airplane galley — the airplane galley, guys! — happened in Season 2, and the chemistry between the two OB-GYNs was so [fire emoji] that I couldn’t help but want to see them together. Bickering and weird and inappropriate, sure. But together.

Alas, in the season opener, Mindy does not choose a life with Danny. Her elation over their elevator hook-up is deflated when she sees the invitation to his wedding: When confronted, he sheepishly apologizes for not bringing the matter up while they were stuck in a confined space for hours. “Our thing was never really deep conversation,” he says, as if that’s an excuse.

Mindy’s shocked to hear that Danny and Sarah have only dated for a short while. “I was seven months pregnant, and you didn’t want to propose to me,” she says quietly. “And then I really wanted to marry you and you ruined my life,” he replies. Don’t you mean, “I wanted a 1950s housewife or else,” Danny?

Anyway, after a few hot kisses, Leo’s folks decide to table any further discussion until after he’s talked to Sarah and called off the wedding. That leaves Mindy free to go back to the practice and try to convince everyone she was in southern Florida — and not Danny’s southern region — all weekend. But when Leo’s headmaster calls and Tamra answers, she and Colette eventually learn what Dr. C has really been up to. 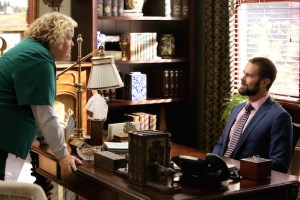 So they confront her in front of Jody (and the rest of Shulman & Associates), but surprisingly, Dr. Kimball-Kinney isn’t mad at all: Mindy didn’t know that he’d bought her an apartment (and was going to declare love), and she didn’t know that Danny was engaged, so she’s blameless in his eyes. But he is looking forward to getting an answer to whether or not she wants to be with him…

Then Beverly, of all people, has a heart-to-heart with Mindy and drops this novel idea: “If neither one of these guys is right, wait for someone special to come along.”

Min is gobsmacked. “Don’t operate out of desperation. That never occurred to me,” she says. So when Danny shows up at her apartment later and admits that he didn’t have the talk with Sarah, it’s clear there’s no future for them there. (Side note: By this point, I know that Danny has repeatedly said he doesn’t think there’s anything wrong with him and that he doesn’t need to change. SO WHY DOES IT STILL INFURIATE ME SO?)

Later, Mindy channels her inner Kelly Taylor and runs to Jody’s in her nightgown, in the pouring rain, to tell him that she’s not choosing him, either. “I want to be by myself for a while,” she says, shortly before he starts calling her names and saying they can’t be friends. “Get to runnin’, you crazed harlot!” he yells from the window as he hurls objects at her down on the street. But as she walks away, Mindy looks happier than we’ve seen her in a while.

Now it’s your turn. Grade the premiere via the poll below, then hit the comments to elaborate on your thoughts!