Coming off of a big Season 2 cliffhanger, will Madam Secretary have to retool its title sequence and call itself Madam Vice President for the rest of the season? The CBS drama’s Season 3 premiere answers that question — and quickly — but not in the way you might expect.

In a moment, we’ll want to hear what you thought of the hour. But first, read on for the highlights of “Sea Change.”

WELL, THAT WAS FAST | When we pick up with the Dalton campaign, the president, Elizabeth, Russell and a few others are watching the returns roll in on the night of one of the primary elections. It’s a very tight race… and then Dalton loses. To make matters worse, this means that he’s going to lose his party’s nomination, something that has only happened one other time (Franklin Pierce) in American history. As a dejected Dalton slinks off, Russell angrily turns to Elizabeth and spits, “This is all your fault.”

Then we flash back to two months earlier. In this timeline, Elizabeth has privately accepted Dalton’s offer to be his running mate in the upcoming election, but that news won’t be made public until after the convention. (Side note: I’m no presidential scholar, but aren’t the VP picks usually public knowledge before the party conventions?) So she’s not-really-campaigning-but-kinda-campaigning for the Dalton ticket at places like the Virginia State Fair. (Another side note: of all the fried foods you can grab at a state fair, Bess, fried gelatin balls? I would eat a section of rubber garden hose if it were dipped in batter and took a swim in some hot oil, but even I think fried gelatin balls sound disgusting.)

Long story short, even though Henry’s not psyched about having to cut back on work and such, all of the McCords are united behind Elizabeth’s desire to be vice president.

Then, a big storm hits Bahrain.

WHEN IT RAINS, IT POURS | The meteorological event is significant because a) it kills an ensign at the U.S. naval base there, and b) it highlights that the administration/party’s unwillingness to officially recognize a climate change crisis means that all of the fat cats with have sweet, no-bid contracts to work on the bases have zero incentive to raise those bases in order to keep up with rising sea levels.

Once Elizabeth becomes aware of this situation, she presses Dalton to do something about it. But he has zero interest in changing the status quo — and ticking off some of his biggest donors, who happen to have a few of those no-bid contracts — so he lays into his potential VP. “What good is bold idealism if it all but guarantees the loss of a second term?” he angrily asks her. “I’m talking about doing what’s right,” she counters. His response? “And I’m talking about winning.” 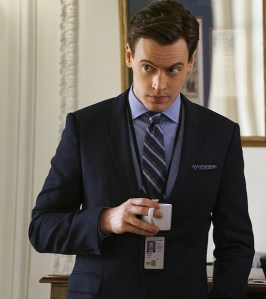 THINKING OUTSIDE THE BALLOT BOX | But of course, Elizabeth’s ideas have a way of taking root, and when Dalton’s opponent accuses him of being soft on defense during a televised debate, he goes off book and brings up how global warming, though not officially acknowledged by the administration, is putting an insane amount of people in danger every day, yet no one wants to do anything about it. So he vows to change things, likening his move to when President Johnson signed the Civil Rights Act of 1964 — against the will of his own party — because it was the right thing to do.

Soon after the debate, Dalton’s biggest contributor switches his support to Evans, aka the other candidate. And when we flash forward to the present once more, it’s a defeated Dalton whose focus has shifted to his remaining seven months in office. But when Evans asks Elizabeth to consider staying on as secretary of state for his administration, she runs to Dalton with an idea: “Don’t endorse Evans. Run as an independent.”

It’s a crazy idea, but one that just might work. Dalton is very popular with certain factions. If he can secure a popular Pennsylvania senator as his running mate — sorry, Bess, but you’re off the ticket — it will help his cause. And he doesn’t necessarily have to win the popular vote: If none of the candidates get to 270 electoral votes, the election will be decided by the House of Representatives… and Russell thinks the house might choose Dalton.

Plus, with his “‘dismantling the world as we know it’ platform,” Dalton will need a strong and experienced MadSec on his team. Bottom line: Elizabeth isn’t going anywhere!

THE KIDS AREN’T ALL RIGHT | In other, more troubling news: The McCords learn that someone has hacked Jason’s computer, accessing the web cam various times… and then some guys with a van and a baseball bat attack Henry to get the computer back. Even worse: Elizabeth and Henry later receive a ton of photographs that indicate that someone has been stalking their kids.

Now it’s your turn. Grade the premiere via the poll below, then elaborate on your choice in the comments!