In baseball, “waving off” a pitch happens when a pitcher decides to go against a catcher’s advice and instead throws whatever kind of ball he or she deems best. It happens a lot in this week’s Pitch and, indeed, becomes Ginny’s life mantra as she navigates the expansive, landmine-filled territory of her instant stardom.

Elsewhere on the Padres, though, life is not quite as shiny and new. Oscar makes moves to oust Al as manager (Al’s big mouth doesn’t help any), and Mike spends the hour complaining about his crunchy knees and broken heart. We also learn how Ginny and Amelia got to know each other, and we watch the first moments of Mike and Amelia getting to know each other better… if you catch my baseline drive.

Read on for the play-by-play of “The Interim.”

ROAD TRIPPIN’ | “Ginnsanity” is in full effect as the Padres hit the road for Los Angeles and an away series against the Dodgers. The effect is not lost on the team, which is plagued by petty arguments started by fragile ego’d baby-men and near fistfights between fragile ego’d baby-men. So Lawson takes everyone out for drinks to celebrate Ginny’s first win… but only a few of the guys show up.

On the team bus the next day, the players reenact the “Seat’s taken” scene from the beginning of Forrest Gump, and Ginny is forced to sit next to Lawson… who needles her for waving off his pitch suggestions in the previous game. She reminds him that her fastball tops out at 87 miles per hour, so she doesn’t always trust it. “You may not always trust your fastball. You need to trust me,” he reminds her.

BATTING A THOUSAND, AL | The Los Angeles trip is plagued by some video of the team manager Al, shot a few years before, in which he talks about then AA-League player Ginny and how her beauty means that a lot of his guys would welcome her in the locker room. It’s very old-school and not terribly politically correct, but… have you met Al? Also, sports journalists are used to having to cover scandals involving steroids and explicit sexts; I can’t imagine any baseball reporter worth his or her salt really caring about this so-called controversy.

But anyway, the video is yet another reason for Frank to fire Al, and the team owner calls Oscar into his office and lets him know he wants to begin the search for an interim manager. Unaware of any of this, but realizing that helping Al would reinforce her position as “one of the guys,” Ginny tells Amelia to put out a statement in support of the team manager. (There’s also a sweetly awkward scene in the away locker room in which Al apologizes personally to Ginny; I know he’s a dope, but the line “The world kind of passed me by when they made the Internet,” endeared him to me.)

But Amelia thinks standing up for Al isn’t in Ginny’s best interests, so she ignores the request — which doesn’t make the pitcher at all happy when she finds out. We learn, via flashback, that Ginny’s brother, Will, was managing her (badly) until Amelia came knocking. When Amelia was able to fill a minor league stadium with Ginny supporters — and rally the local press to cover the event — Will realized that he had no idea how to be the kind of agent his sister really needed, so he stepped aside. “You’re the boss, don’t you ever forget that,” he tells her tearfully. “Dad would’ve been so proud of you. Of course he wouldn’t have said it, but he would have been so very proud of you.”

GINNY ON KIMMEL | With her bro’s advice in mind, Ginny appears on Jimmy Kimmel Live!, rocking a pink sleeveless dress and soft curls. She’s an OK guest, but things get interesting when she refuses to take part in a comedy bit about decorating the clubhouse called “Ginny Baker, Redecoraker.” Instead, she uses her time on the show to publicly support Al, calling him a good man, and to comment on a sports-related rape case that’s been in the news. “We don’t need to make sure every girl goes in the right room, we need to make sure that every boy knows it’s wrong to rape,” she says. The crowd really likes this.

After the appearance, Ginny politely but firmly reminds her agent, “I call you off, Amelia. Not the other way around. I’m the boss.” And in a quick flashback, we see how Amelia’s husband left her after their second round of IVF didn’t take, which prompted her to reconsider everything and quit on a whim after seeing some news footage of Ginny playing ball. “I will go with you!” Eliot announces (without being asked) after she walks out of an inane meeting, making him the Dorothy Boyd to her Jerry Maguire. He’s even holding a bag of goldfish crackers! (But do they have manners?)

LAWSON STRIKES OUT | Earlier in the episode, Mike mentions to Ginny that his ex-wife wants him to stop by their Los Angeles home to go through his stuff. He talks a big game about how she really wants him back; when we meet her, we realize that his ex is Rachel, an on-camera sports reporter (played by Once Upon a Time‘s JoAnna Garcia Swisher) with whom he is still in love. Lawson gives a long speech about how he understands that she had an affair and left him because she always came second after baseball. “What if I called it a career, end of this season, maybe next?” he asks hopefully. “Would you take me back?” But… big swing and a miss there, dude. “I’m engaged,” she tells him.

A sad Lawson later busts up another locker-room scuffle and attempts to rally his guys, citing how hard Ginny works — which we saw in a training montage earlier in the hour — and how “We’re gonna shock the world, and yeah, we’re gonna do it with a pretty girl in the dugout.” 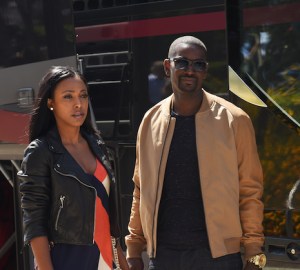 The Padres win, and the team goes out to a club to celebrate. But when Ginny hits the dance floor, Lawson takes off. He winds up back at the hotel bar, where he finds Amelia working on her computer. When he sits down next to her, she closes her laptop in the most seductive manner I have ever seen someone do that. I didn’t even know it was possible to shut down a computer in a come-hither way. But there you have it.

Oh, and Al is almost certainly out of a job. But he’s aware of it.

SHIRT OUTTA LUCK | In other news: Blip’s slump-buster tee shirt fell apart in the wash, but Evelyn is there on the road to sex him back into good spirits. Plus: She buys a new/old shirt and effectively makes him a new slump-buster, and it works. For what it’s worth, Mo McRae and Meagan Holder are so good together and so good in these roles. I’d watch a show just about them.