Put her in coach, she’s ready to play… or is she?

Ginny Baker, Major League Baseball’s first female player — and the character at the center of Fox’s new drama Pitch — has been waiting her entire life for a shot at the big show. But is she successful on the mound? We’ll get to that in a moment. First, a brief recap of Thursday’s series premiere:

We meet Ginny (Twisted‘s Kylie Bunbury) on the morning of her debut as starting pitcher for the San Diego Padres. Her hotel room is full of fruit baskets from the likes of Hillary Clinton and Ellen Degeneres, but she ignores all of that — and the news reports hyping her MLB start — as she dons headphones and heads down to get in a car with her aggressive agent Amelia (Heroes‘ Ali Larter) and awkward social media guru Eliot (The Neighbors‘ Tim Jo).

They head to the stadium, where general manager Oscar (All My Children‘s Mark Consuelos) and team owner Frank Reid (Seinfeld‘s Bob Balaban) gush about increased ticket sales and how excited her teammates are to meet her. “No, they’re not,” Ginny replies, but it doesn’t seem to bother her: From all appearances, Ginny is a cool professional who’s ready to do her job. As she says at one point before the game, “I’ve been ready my whole life.”

A series of flashbacks sprinkled throughout the hour show us that Ginny took to baseball as a very young girl, after her dad — a former minor league player — because frustrated that her brother didn’t want to play. In the memories, Bill Baker (Third Watch‘s Michael Beach) soon realizes that his daughter has something special. So he teaches her a secret pitch called the screwball, which will allow her to stay competitive with male pitchers despite not having their size or throwing power, and she’s on track for greatness. But Bill never seems satisfied; indeed, some of his coaching methods are pretty abusive. 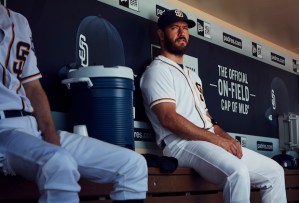 Back in the present at Ginny’s first game, her nerves get the better of her. It doesn’t help that everyone is comparing her to Jackie Robinson, or that she overhears the team’s jovial captain Mike Lawson (Saved by the Bell‘s Mark-Paul Gosselaar) casually calling her a joke in the clubhouse. So her big debut is marred when she throws 10 garbage pitches right away and then begs the team manager Al (The Wonder Years‘ Dan Lauria) to pull her out of the action.

But Oscar and Frank know that the Padres can’t be the team that axed the country’s first female pro baseball player, so they order Al to have her start again in five days. And after an intense practice session with her dad, a girls’ night with a teammate’s wife and a gametime pep talk from Mike — who has realized that helping her become a legend may be his legacy — Ginny gets her mojo back and smokes the opposing team. When she leaves the game several innings in, it is to a standing ovation from the crowd.

All of that’s enough to make Dad proud, right? Wrong. When he shows up on the field with her later that night, Ginny flashes back to the night she was scouted by the Padres… and how she and her father were in a horrific car accident on the way home. He was ejected through the windshield, and… yep, Bill Baker is dead, and every time Ginny sees him in the episode, it’s really just all in her head. And, as he reminds her at the end of the episode, this is no time to rest on her athletic laurels: “We ain’t done nothin’ yet.”