As in, she’s wanted by Ryan… who’s planning to ask her to marry him.

The exclusive video above shows the lead-up to the moment, in which an oblivious Alex skips off to the bar while Shelby and Ryan discuss his put-a-ring-on-it plan.

The planned proposal appears to be evidence that Ryan is “in a good place at the beginning of Season 2,” series creator Joshua Safran says. “But underneath that good place, he’s still struggling with what he feels were the mistakes he made in the previous year, in terms of not trusting Alex and listening to orders instead of following his own instincts.”

Press PLAY on the clip above to watch Shelby squee with girly excitement, then come back down here for some crucial intel on the upcoming season.

While we’ve got you, how about some scoop on what’s ahead for our favorite former NATs? Safran dropped the following nuggets of intriguing info:

* … But this season won’t give you whiplash. “Last year, at the end of every episode, there was, like, ‘Oh no, there’s a twist! Caleb is on Facebook under a different name! Shelby is speaking Arabic on the phone!’ That is so not the show this year,” the EP assures viewers. “It really is like you’re slowly stepping into these people’s psyches and getting deeper and deeper.”

* Alex doesn’t exactly kick butt right off the bat. “When you start working at the CIA, you don’t become an operative immediately, or even necessarily at all,” he says. “There are many different tracks, like at any company.” Sure, and the series is going to spend half of its season showing us Alex filing paperwork and sitting in a cubicle? “Through the course of the premiere, she maybe finds a way into a more exciting life in the CIA,” Safran adds, laughing.

* Expect your FBI faves to show up regularly. Crossover between the Federal Bureau of Investigation and the Central Intelligence Agency is “what this season is all about. It’s about how these agencies work together. In both time lines we see that,” the EP says. “It’s all one story.” 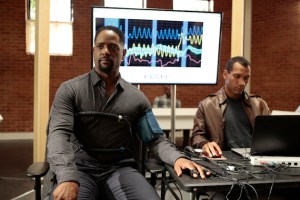 * There are plenty of new names to learn. The season’s opening hour introduces us to several new faces, including veteran CIA agent Owen Hall (played by L.A. Law‘s Blair Underwood, pictured at right). “He’s worked for the CIA for over two decades, and he’s not Liam O’Connor,” Safran says, referring to Season 1’s Big Bad. “You never know in Quantico, but at least when we meet him, Owen is very calm. Very authoritative. He’s been doing what he’s been doing for so long that he knows how to do it exceptionally well, and everybody looks up to him.”

* Sadly, no more Quantico (the academy) means no more training montages. However… “The thing is, weirdly, there are more chances this year to see their fitness than last year with all the training montages,” he teases. “That’s all I’ll say about that.”