Season 13 of Grey’s Anatomy is already looking pretty unlucky for Alex. In Thursday’s premiere, both his fellow doctors and the police had questions for him about how poor Andrew’s pretty face got so thoroughly rearranged, and neither truthful answers nor lies seemed likely to wash the blood off of Karev’s hands. Is he about to go from the O.R. to big house? Read on and find out…

A REAL KNOCKOUT | Picking up where Season 12 left off, “Undo” began at Owen and Amelia’s wedding reception, where Meredith was reluctantly putting the kibosh on Nathan’s attempt to get closer to her when she received a frantic call from Jo. After hightailing it to the loft with Richard, Grey deduced just how much trouble Alex was in, left Webber with Wilson, and made a beeline for Grey Sloan. There, she quickly figured out that her person had pummeled DeLuca. When Alex explained that Andrew had been on top of a drunk Jo, Mer decided not to inform Bailey that he was responsible for DeLuca’s injuries. Instead, “you slipped in the rain,” she told her pal. “That’s how you hurt your hand.” She even lied to Maggie that she didn’t know what had happened to her ex. Mind you, not everyone was buying Alex and Mer’s tall tales. Ben, for one, didn’t, and warned his buddy that, as soon as DeLuca awakened, he’d obviously talk. What was Karev’s plan? “Talk to [Andrew] before he says anything,” he suggested to Grey.

EYE AY AY! | Unfortunately, DeLuca was in no shape to see anyone, much less his attacker. Could things get any worse? Why, yes. Yes, they could — and did. When Jo arrived at the hospital, Karev jumped to conclusions rather than listen to his non-fiancée when she attempted to explain that neither had DeLuca been taking advantage of her, nor had she been hooking up with him. So, in the end, their misunderstanding turned into an argument that turned into another disaster. He even spat that he’d been foolish to want to marry her, since it was so easy for her to throw people away. “I was asking you,” he said, “for something you’re not capable of.” Observing Andrew’s surgery — and his unresponsive eye — Ben told Mer that “whoever did this [to DeLuca] just ended his career as a surgeon.” And another thing: Warren knew who did it, but Bailey shouldn’t hear it from him.

ARRESTED DEVELOPMENT | After finding Jo packing up to leave town, Stephanie reported what Wilson told her to Mer — that Andrew hadn’t been forcing himself on her. In turn, Grey informed Alex, noting that “we’re the bad guys!” Still, he was determined to talk to Andrew. It was his only hope. Meanwhile, Richard stopped Jo from leaving Seattle or the program. When she visited Andrew, he got angry because it appeared that her main concern was that he not reveal her marital status. Next, Alex attempted to talk with DeLuca, which resulted in the patient freaking out utterly. At the same time, Mer was struggling with the knowledge that she had to turn in her person. It was so hard that she even asked Nathan to sit with her for a while. As she confessed to Miranda that Alex had beat up Andrew, Karev was turning himself in to the police. So, ultimately, a shell-shocked Jo was left to watch as the man she loved was hauled out of Grey Sloan in handcuffs. At least, during a subsequent prison debriefing, Alex forgave Mer for coming clean with Bailey. 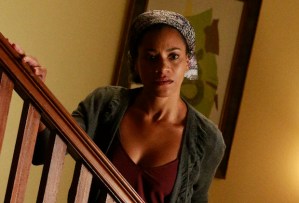 NAMING NAMES | In semi-related events, when Maggie heard that her ex-boyfriend had been admitted to the hospital, she ran right there and even stood by as Jackson operated… but she also took pains to let Nathan know that she and DeLuca were really, truly over — not that a workplace romance couldn’t work. Later, she learned that Mer had misled her about how Andrew had wound up in such dire straits and warned her sister not to lie to her again. Yet, when Nathan showed up at the sibs’ house and Mer turned him away rather than admit that, yeah, she dug him, she still lied again to Maggie that it had been someone looking for directions at the door. (That’ll go well.) Bailey caught on to the fact that Ben, too, had fibbed to her about the Alex/Andrew mess but ultimately seemed to agree with her husband that he couldn’t be her workplace spy.

On a lighter note — whew! — April tried not to tell Catherine the baby’s moniker until Jackson could be present. But, of course, Grandma couldn’t wait. So, after a momentary misunderstanding — during which Richard’s wife thought that the newborn was named after her! — April revealed that the tot was called Harriet. And not, as Catherine hoped, Harriet Avery, either. Finally, April and Jackson informed Catherine that their daughter’s surname was Kepner-Avery, which seemed to be a happy compromise for everyone.

So, what did you think of the Season 13 premiere? Grade it in the poll below, then hit the comments with your review.