Throughout this whole crazy season of Mr. Robot, we weren’t quite sure what was a dream and what was reality. Well, Wednesday’s Season 2 finale served as a big, bloody wake-up call.

The first blood drawn this week is the blood splashed all over Darlene’s jacket. Yay, Darlene’s alive! But Cisco’s dead (that’s his blood) following that Dark Army ambush a couple weeks back, and Dom and her boss have Darlene holed up in an interrogation room. Darlene pleads the fifth, but Dom’s boss coldly tells her that doesn’t apply: “This isn’t Burn Notice… Characters like you are not welcome here.” Oooh, USA Network burn!

Dom tries playing good cop with Darlene, saying they’re both just a couple of “Jersey girls,” but Darlene sees right through it; in fact, she invites Dom to “suck a dick.” Dom pulls out evidence like the masks and video equipment used to make the fsociety videos, but Darlene shrugs it off as just kinky sex games between her and Cisco. Nothing’s working, so Dom decides to show the FBI’s hand.

She takes Darlene to a room where the feds have mapped out fsociety’s entire web in a massive Carrie Mathison-style chart. Dom says the FBI is utilizing what they call “the python approach,” where they “lie in wait for the right moment to strike.” Darlene’s on the chart, and Cisco, and Angela… and right in the middle are Tyrell and Elliot. Darlene’s response? “You’ve gotta be f—king kidding me.” (So Darlene didn’t know Tyrell was involved? How could she, if Elliot didn’t know?)

Speaking of Tyrell… actually, let’s deal with his wife Joanna first. The ice queen pays a visit to Scott Knowles, the E Corp CTO whose wife Tyrell strangled in Season 1. Joanna knows Scott’s the one who’s been calling her and sending her gifts as Tyrell. (His address is the one Elliot tracked Tyrell’s cell phone to a couple weeks ago.) And Scott admits it. Clutching a bottle of booze, he tearfully recalls how his wife was pregnant when she died, and says he wanted Joanna to feel the kind of pain he felt: “I wanted to give you hope that I could step on.”

He apologizes, but Joanna’s not willing to kiss and make up. Actually, she calls Scott a “pussy” and a “piece of shit” and taunts him with the fact that his wife cheated on him with Tyrell. She even says, “That child’s lucky to be dead” (ouch), and Scott flies into a rage, pummeling her face to a pulp. But that all may be a part of Joanna’s master plan. Because later, when her boy-toy Derek tends to her wounds, he vows to get revenge on Scott. And Joanna lets him know how he can: by telling the cops he saw Scott looking out-of-sorts the night his wife died, pinning her death on him. The lesson, as always: Don’t mess with Joanna Wellick. 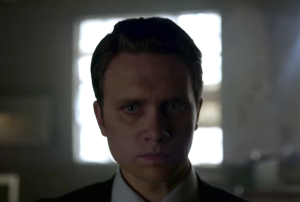 And what about her better half? Tyrell — who is definitely, probably alive — leads a bewildered Elliot into a dingy warehouse filled with high-powered servers. Tyrell reminds Elliot that the Dark Army set this up for them: “You really don’t remember this, do you?” Elliot mentions Joanna, and the fact that she thinks Tyrell is dead. Tyrell can only sigh: “I’m doing what’s necessary.” Then he directs Elliot’s attention to a computer monitor: “Ready to look at what we accomplished?”

That’s when we finally get a look at the much-vaunted Stage 2. It’s a set of blueprints for an E Corp building and a power supply grid. Elliot’s as confused as we are, so Tyrell fills him in: E Corp is shipping all of their paper documents (the backups for all the financial information lost in the hack) to a single building, right next to Tyrell’s warehouse. The plan is to flood the room holding the documents with hydrogen gas and ignite it, destroying the documents and erasing all that data for good. And yeah, blowing up an entire building in the process.

Elliot rejects the idea of endangering lives like that, but Mr. Robot pops in to assure him this is the logical next step: “We had to go all the way.” Elliot starts deleting the code that’ll lead to the explosion, but he stops when Tyrell points a pistol at him. Tyrell is furious: “We were supposed to be gods together, and yet you want to destroy our destiny.” Elliot isn’t scared, though; he’s convinced Tyrell is just a figment of his twisted mind, like Mr. Robot. Remember when Mr. Robot shot Elliot in the Season 2 premiere? Well, Elliot challenges Tyrell to do the same. And BANG! He does.

Except this time, Elliot looks down… and sees blood. That bullet was real, and so is Tyrell. Elliot slumps to the ground and sees Mr. Robot flickering and glitching, but Tyrell remains solid. Tyrell even says Elliot gave him the gun, as a last resort. “We couldn’t let anyone stop us… including us,” Mr. Robot says. Then Elliot’s vision fades to black.

But wait! There’s more! We know Elliot survived that gunshot, because the episode ends with Angela — there she is! — receiving a phone call from Tyrell. A phone call she was expecting (??). She tells him, “You did what needed to be done.” (???) A sobbing Tyrell says, “I love him.” Angela replies, “I do, too.” So whoa: Was Angela the Keyser Söze of this whole operation? Yes, she struck up that alliance with Whiterose last week… but was she part of the whole Dark Army/fsociety crew even longer than we knew about?

But wait! There’s even more! Just like last season’s finale, that scamp Sam Esmail tacked on a post-credits scene here. We find Trenton and Mobley — er, “Frederick” — in what looks like California, working at an electronics store and seemingly in witness protection. Trenton pushes Mobley to help her undo the hack, to “put everything back the way it was.” But they may have trouble doing that: Elliot’s Seinfeld-loving prison buddy Leon approaches the two of them to ask, “Do you have the time?”

So Leon’s there to kill them, right? (He’s killed for Elliot before.) Did Stage 2 go off without a hitch? We never saw anything after Elliot’s gunshot besides the phone call to Angela. Will Darlene give any information to Dom and the feds? (Yeah, right.) Will Tyrell — who is definitely alive! — reunite with Joanna and revive TV’s most terrifying power couple? And what’s next for Elliot and fsociety? Many, many questions… and we’ve got a year or so till Season 3 gets here to contemplate them.

* In the opening flashback with Tyrell and Elliot on the boardwalk, Tyrell recites “The Red Wheelbarrow” by poet William Carlos Williams. Remember what was written on the front of Elliot’s prison journal? “Red Wheelbarrow.” And which restaurant menu had the number clues on it two episodes ago? Red Wheelbarrow BBQ.

* Tonight’s musical selections: Kraftwerk’s “Hall of Mirrors,” as Tyrell and Elliot entered the warehouse; a cover of Aimee Mann’s “The Moth,” as Dom led Darlene through the FBI office; and the 1983 Kenny Rogers-Sheena Easton duet “We’ve Got Tonight,” blaring from Leon’s car in the post-credits scene. (That guy just loves retro pop culture, doesn’t he?)

* No Whiterose this week? And no Phillip Price, either? BD Wong and Michael Cristofer, you were missed.

* Loved Tyrell’s out-of-control God complex. As he’s showing Elliot their Dark Army hideout: “This is Mount Olympus. We are prime!” Here’s hoping whatever happens in Season 3, Tyrell Wellick is a huge part of it.

Did Season 2 end on a high note? Grade the finale via our poll below, then hit the comments to start talking Season 3.