“Are you a giraffe, or a seagull?” If you’re flummoxed by that Zen koan of a question, then you know how we’re feeling as we try to make sense of the big ball of WTF that was this week’s Mr. Robot. But amid all the riddles and confusion, we did gather some important clues — and saw the return of a sorely missed character. (We think.)

Of course, knowing Mr. Robot, all the surreal goings-on in Season 2’s penultimate episode could just be in Elliot’s head, since he began the episode by sinking into a lucid dream: “Mind awake, body asleep…” But let’s take a stab at piecing together what happened, just in case it all turns out to be real.

Let’s get this out of the way first: No update on the status of Darlene and Cisco after last week’s shootout. A blood-splattered Dom mentioned there are “several people dead” (without specifying who) as she bickered with her boss and waved off doctors. She wanted to go after the Dark Army — “This could be an act of war” — but her boss once again stood in her way, this time because China is floating E Corp a $2 trillion (!) bailout loan. He told Dom to just go home and get some rest. I sincerely hope this guy turns out to be a Dark Army mole, because if not, he’s just a shitty mansplainer of a boss.

Meanwhile, Angela found herself trapped in the back of a van driven by the two strangers who accosted her last week. She demanded her phone back, but they stayed silent as they pulled up to a house in the suburbs. They led Angela into a dark, creepy room with an illuminated fish tank, an old-school computer, a rotary phone, and a “Hang in There” kitty poster. Angela asked (speaking for all of us): “What the f—k is going on?”

Here’s where things got really weird: A ponytailed young girl entered and calmly began asking Angela wildly bizarre questions. Like, “Have you ever cried during sex?” Or “Have you ever fantasized about murdering your father?” Plus, the aforementioned giraffe vs. seagull quandary. Angela refused to play along at first, but the girl told her if she didn’t, “I’ll be punished.” To prove it, she showed Angela bruises on her back from an apparent beating.

A sympathetic Angela agreed to cooperate, but got frustrated when the girl kept asking the nonsensical riddle, “Is the key in the room?” Then the rotary phone rang. A robotic voice led Angela through a series of questions similar to a text-based computer game from the ’80s: “You are standing in a dark room…” The game ended with Angela using a key to open a door, and then the girl asked again: “Is the key in the room?”

Spying a copy of Nabokov’s Lolita on the desk, Angela remembered a quote from that book: “Yes. The key was in my fist; my fist was in my pocket.” That seemed to satisfy the girl, who left to get Angela’s “results.”

That whole David Lynch-ian sequence, we later found out, was just an elaborate test conducted by Whiterose. (The girl’s bruises were just makeup.) Informing Angela they had precisely 28 minutes to talk, Whiterose urged her not to reveal the incriminating Washington Township info. And she knew about Elliot’s dad and Angela’s mom, too, telling Angela they died “to take humanity to the next level.” (Ugh.) The whole conversation was dense and cryptic, but it must’ve worked on Angela, because the next thing we knew, she was telling her lawyer to forget the voice mail she sent, adding, “Don’t call me anymore.” 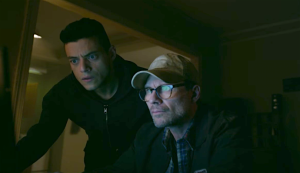 Oh, and then there’s Elliot. Remember him? He was asleep for most of the episode, but he woke up (or so we think) to find Mr. Robot rifling through his mail. One of the takeout menus had a bunch of numbers scrawled on it, which Mr. Robot decoded to discover a phone number. The number led to a robotic voice (another one!) that told them there was a cab waiting at 25th and 8th. Elliot went there and found a cabbie who called him by name. Elliot entered the cab, and then the cab’s other door opened… iiiiiiiiit’s Tyrell Wellick!

Seemingly unaware that we’d been waiting all season to see him, Tyrell nonchalantly climbed in and told the cabbie, “Church and Chambers.” Elliot was as stunned as we were, since he thought he killed Tyrell. In fact, he demanded the cabbie acknowledge Tyrell’s existence to confirm he’s real, which led to the cabbie angrily kicking both of them out of the cab.

Out on the street, Tyrell tried to calm Elliot down, assuring him that everything is fine and the vaunted Stage 2 is ready: “When you see it, you’ll be pleased.” Putting an arm around a bewildered Elliot, Tyrell couldn’t resist quoting Casablanca: “Louie, I think this is the beginning of a beautiful friendship.” God, I missed that kook.

* One big clue that this whole episode was in Elliot’s mind: the musical nods to his favorite movie franchise, Back to the Future. No less than three songs from BTTF were heard this week: the blues instrumental “Night Train” and “The Ballad of Davy Crockett,” when Angela was in the van, and “Earth Angel,” in that final scene with Elliot and Tyrell. Whoa… this is heavy.

* Loved the ominous beeping during Angela and Whiterose’s conversation, with each beep exactly one minute apart. Man, Whiterose wasn’t kidding when she said 28 minutes! 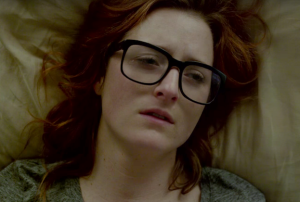 * Is there anything sadder than a wiped-out Dom having a heart-to-heart with her virtual assistant Alexa? And when Dom finally asked Alexa if it loved her, the thing had the nerve to respond: “That’s not the kind of thing I am capable of.” C’mon, Alexa! Learn how to lie to protect someone’s feelings!

* You may have noticed Angela’s van captors credited as “Inconspicuous Man” and “Inconspicuous Woman.” (Hee.) But did you notice they’ve been following her for weeks?

* A tidbit from last week’s Hacking Robot after-show that seems especially relevant: Darlene’s hacker handle is “DoloresH4ze,” a reference to the young temptress from… Lolita!

* Technically, this week’s Mr. Robot was Part 1 of a two-part season finale, which concludes next Wednesday. Maybe it’ll all make perfect sense in retrospect!

Is Tyrell really alive and well? And what does Angela have cooking with Whiterose? Hit the comments to spin your pre-finale theories.