Whew… have we all caught our breath yet?

This second season of USA’s Mr. Robot has been, let’s face it, a little meandering at times. (We criticize because we love.) But this week’s episode made up for all of that with a rush of massive plot developments and some truly dazzling filmmaking from creator/director Sam Esmail. Hands down, it’s the most satisfying episode so far this season.

We picked up where we left off last week, with Joanna accosting Elliot/”Ollie” on the street. Back in her lavish apartment, Joanna stared directly into Elliot’s soul (Elliot, to us: “I still feel like she can hear us”) before finally asking him to help her find Tyrell. Elliot, of course, thinks he killed Tyrell — though I’m still not sure we can trust him on that — but he played along to avoid arousing her suspicion. Because Joanna is, after all, a scary woman.

Case in point: She recounted to Elliot the very romantic tale of her first date with Tyrell. She saw some earrings she liked on a beautiful woman, and so he seduced the woman to get the earrings for Joanna. (She still has them, too: “These are the cheapest things I own. And yet they’re my favorite.”) That was all to tell Elliot how far Tyrell would go for her… and how far she’d go for him.

Tyrell actually called Joanna the night before, she said, showing Elliot the phone Tyrell sent her. But Elliot still didn’t want to help, and tried to escape before Joanna’s burly chauffeur Mr. Sutherland stood in his way. That’s when Joanna sealed the deal by slinking over to Elliot, tenderly pulling back his hoodie, grabbing his face and getting intimately close, and instead of kissing him, whispering in his ear: “Do you really want to say no to me?” Ummm… no, ma’am?

So Elliot and Mr. Robot headed to their local Micro Center (a Best Buy clone) to gear up for an epic hack, picking up a fresh laptop and a bunch of burner phones for the task at hand. And it’s a clever one: Elliot hacked into the NYPD database and impersonated a cop to get the phone company to ping Tyrell’s cell phone, thanks to an antiquated fax system. (Elliot: “No one in the world uses fax anymore… except for cops.” Ha!) 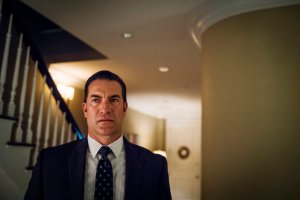 He used the ping to pinpoint the address Tyrell’s calls are originating from — 92 East 82nd Street, for those keeping score at home — but Mr. Sutherland couldn’t believe it: “Trust me, he wouldn’t be calling from that house.” Why? We never got an answer. Add that to the pile of “unsolved Mr. Robot mysteries.” (It’s a big pile, I know.)

Meanwhile, Darlene and Cisco were stuck dealing with a badly injured guy, Vincent, who helped Darlene with the Five/Nine hack. She had zero sympathy for the poor guy, though; she didn’t want him confessing to the feds after an IV full of morphine. But Cisco was fed up with her April Ludgate routine and insisted they get the guy to a hospital, and Darlene surprised us all by relenting. She has a heart after all!

Turns out her paranoia was pretty well-founded, though: Dom and her FBI friends were quickly closing in on Cisco after witnesses reported seeing him outside the safehouse. She begged her superiors to hold off on going public, because if they did, Cisco would become a target for Dark Army assassins. But they did it anyway, plastering a sketch of Cisco all over the news just as Dom tracked him to the hospital they took Vincent to.

And that led to maybe the most exhilarating 20 minutes in Mr. Robot history: With Mac Quayle’s moody EDM score ebbing and flowing underneath, the episode’s various plot threads started to overlap and come together. After receiving urgent texts from Angela, Elliot met her in an empty subway car. She pointedly asked him, “Why did you start fsociety?” Sensing a trap, Elliot danced around the subject, but Angela cut him off, informing him that she’s turning herself into the authorities. She’s given up trying to fight E Corp: “No matter what we do, we will always lose to them.”

She swore she wouldn’t implicate Elliot, though, and the two childhood friends shared a tender goodbye hug — and a kiss! (This isn’t really a ‘shipper-friendly show, but: Yay, Anglliot!) Once Elliot left the subway car, Angela turned around and was confronted by two people we couldn’t see. Her face fell. Were these federal agents, using Angela as bait to nab Elliot? Or someone more sinister?

Speaking of “more sinister”: Darlene and Cisco learned that Vincent needs a CT scan and decided to stick around to hear the results, killing time in a nearby diner. A regrettable decision, to be sure, because Dom caught up with them there and called for backup… just as a pair of Dark Army assassins rode up on a motorbike and one sprayed gunfire all over the diner. Dom managed to wing the assassin with a bullet, and just like her last run-in with them, the assassin offed himself before he could be questioned. Sirens. Credits.

First of all: Holy @*&#(*&(*@&! Secondly: Are Darlene and Cisco alive? In the final scene’s masterfully composed wide shot, we could see Dom duck for cover, but Darlene and Cisco were right in the line of fire, unfortunately. Is Elliot’s sister really dead? And if so, will that send him reeling into another cycle of dangerous delusions?

One thing’s for sure: Mr. Robot is back in top form. And, with just two episodes left this season, not a moment too soon. 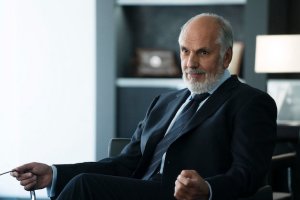 * Can’t forget to mention that opening scene with former E Corp CTO Terry Colby schmoozing with CEO Phillip Price (and calling Donald Trump “a c–ksucker”). Price is trying to get the White House to look the other way while China seizes power in the Congo. It’s all like a very rich man’s game of real-life Risk, and Price’s monologue about being the most powerful man in the room was positively chilling. (Bravo, Michael Cristofer.)

* If this is Carly Chaikin’s last episode as Darlene (and I hope it’s not), she went out on a high note with Darlene’s monologue about being kidnapped by a creepy woman when she was a kid and wishing she could stay with her because her home life was so messed up. Sigh. We’re still just seeing the tip of the iceberg that is the Alderson family dysfunction, aren’t we?

* Loved, LOVED, Elliot using an empty Pringles can and some metal clamps to create a high-powered Wi-Fi antenna for his NYPD hack. Forget CBS’ new MacGyver reboot; just give me a spinoff of Elliot fashioning new tech gadgets out of everyday household items.

* More fallout from the Five/Nine hack glimpsed in the background: a long line of people waiting to access an ATM with a $50 withdrawal limit, and a TV commentator ranting about the incessant brownouts.

* So why did Mr. Robot vanish when Elliot got that heavy-breathing call from Tyrell’s phone? We never saw him during the NYPD hack, either. Elliot mentioned that Mr. Robot wanted to go back to Elliot’s apartment — and even invited us to look around for what Mr. Robot could be seeking. Did you see anything? If you caught a clue with your DVR, drop it in the comments so we can all analyze.

* I just realized “Ollie” is an anagram for Elliot, minus the T. Forgive me, guys; I’m a bit slow sometimes.

Was this week’s Mr. Robot the best of the season? And what (or who) do you expect to see in the final two episodes?