By the end of This Is Us‘ first episode, characters we’ve barely met (yet already care about) experience quite a few extremes of the human condition. There’s budding love. Sibling bonds. A terrible loss. A life-affirming reconnection.

And then there’s Kevin, a very attractive and often shirtless Los Angeles actor who’s unhappy that his lucrative sitcom role is a waste of his time, talent and purpose.

Smallville alum Justin Hartley plays Kevin, and he’s highly aware that his character’s woes may seem a trifle less relatable than, say, those of Chrissy Metz’s Kate (who’s battling obesity) or Sterling K. Brown’s Jack (who’s just found his birth father). “But being frustrated at work? Everyone has had that. Having that work frustration carry over to your personal life? Everyone has also had that,” Hartley says good-naturedly.

Add in that Kevin is feeling the pressures of age — the premiere takes place on his 36th birthday — in an industry obsessed with youth, and “it’s like this perfect storm,” adds the TV vet, who has had memorable roles on Passions, Revenge, Emily Owens, M.D. and most recently The Young and the Restless. “You have the age, unhappy at work and lonely at home. Really, the only thing he has in his life worth anything — besides a paycheck, but who really gives a damn about that? — is his sister [Kate].” 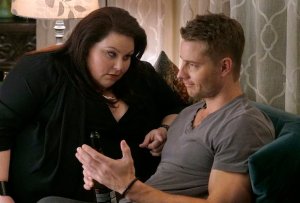 The premiere finds Hartley sharing a scene with Growing Pains dad Alan Thicke, who plays himself, as they prepare to tape an episode of Kevin’s show The Manny. (For spoiler reasons, we can’t tell you exactly what goes down. We can tell you that if ever there were a poster boy for chiseled ennui, Hartley’s Kevin is it.) “We worked together one day, and at the end of the day, I feel like we’re best friends. The guy is awesome,” he says, laughing. “He’s just unbelievable, and so gracious and kind. What a nice guy.”

We also won’t reveal the big twist at the end of the hour; make sure to check in with TVLine immediately following the East Coast airing for a post mortem with series creator Dan Fogelman. But we got Hartley to tease a bit about how Kevin’s life gets a little less lonely — though probably even less comfortable — when Salem’s Janet Montgomery shows up as an acerbic theater actress/potential love interest named Erin.

“She doesn’t take Kevin very seriously as an actor or an artist,” he says, “and she has her opinions about him based on what she thinks he’s all about, what he must be all about because he puts hair product in his hair.”

He adds: “She’s not this warm person right off the bat, but she may warm up to him later.”

As TVLine pointed out in our review, the feelings-laden This Is Us has serious ugly-cry potential; Hartley certainly backs that up when we ask which episodes will reduce us to a pile of emotional destruction.