It’s been a year and a half now since Parenthood went off the air (RIP, Zeek), and it left a gaping void on NBC — and all the major networks, really — in the heartfelt-family-drama category. These days, it’s nearly impossible to find a network drama that isn’t about cops or doctors or superheroes or vampires, but instead about real people and their everyday problems.

In an effort to cure our Braverman withdrawals, NBC gives us This Is Us (premiering Tuesday, Sept. 20 at 10/9c): a kindhearted, acutely observed family drama that presents four stories that are loosely connected (I won’t reveal how) but share common themes of family, romance, and what it means to be an adult. It’s way too early to declare it Parenthood 2.0, and the pilot does contain a late, game-changing twist that sets it apart. But in a fall season overrun with lazy reboots and formulaic procedurals, it’s a soft-spoken gem worth admiring.

Opening with an acoustic Sufjan Stevens tune to get our heartstrings nice and plucked, This Is Us tells the story of four people celebrating their 36th birthday: Jack (Milo Ventimiglia), whose very pregnant wife Rebecca (Mandy Moore) is about to give birth to triplets; Kate (Chrissy Metz), who’s struggling with a weight problem; her brother Kevin (Justin Hartley), a TV star who’s fed up with his brainless sitcom; and Randall (Sterling K. Brown), a successful businessman who’s determined to track down his birth father. 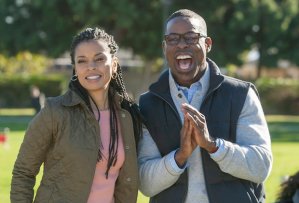 None of these stories, taken individually, is particularly groundbreaking. But again and again, creator Dan Fogelman (Crazy, Stupid Love) manages to take what could be clichéd situations — a weight-loss support group; an adopted kid confronting his biological dad — and infuses them with warmth and authenticity. The dialogue feels real. The people seem to really care for one another. And so we can relate, and empathize, and start to connect with these characters.

It helps that the cast is uniformly strong. Brown follows up his Emmy-nominated work as Christopher Darden on The People v. O.J. Simpson with another quality performance, and Hartley (Smallville, Revenge) is winning as a poster-boy hunk who yearns to be taken seriously. Plus, Major Dad himself, Gerald McRaney, appears in the pilot as the folksy doctor delivering Rebecca’s babies — and he has a knockout monologue that might one day be remembered as This Is Us‘s first good cry.

Now about that twist: There is a revelation near the end of the pilot that explains how the four stories are connected. I admit it came as a total surprise to me, and I won’t reveal it here so viewers can have the same experience. (In kind, if you have a theory about, or have heard of, the twist, please refrain from blurting it out in Comments.) I will say it opens up some interesting storytelling avenues for Fogelman and his writing staff to explore in the weeks to come. (It might even have you rewatching the pilot to see what clues you missed.)

But ultimately, the twist doesn’t matter all that much. This Is Us earns its emotional impact (and yes, its tears) not by pulling a rabbit out of its hat, but just by looking deeply and honestly into human lives and the unseen strands that tie all of us together. It proves, once again, that we don’t need fancy bells and whistles to get invested in a TV drama. The truth, well told, is enough.

THE TVLINE BOTTOM LINE: With emotionally resonant dialogue and top-notch performances, This Is Us should fill that Braverman-sized hole in your heart.

Again, if you have a theory — or have heard — about the twist, TVLine asks that you respectfully refrain from blurting it out in Comments.