Question: Any word on what Laurel made Oliver promise her right before she died on Arrow? Was it something for him to do or not do? —Kia
Ausiello: Look at Kia kicking off the first new AA in more than a month with a sensational Q! Here’s your answer, straight from showrunner Wendy Mericle. “It is both actually, and you’ll find out what it was in [the Oct. 5 premiere],” teases the EP, who adds that the reveal will “inform a lot of Season 5.”

Question: Safe to say we’ll see Colton Haynes’ Roy back on Arrow this season? —Jen
Ausiello: It’s actually not safe to say. Mericle tells us that Haynes — who’s currently shooting an arc on Fox’s Scream Queens — is not currently set to return. The key word there being currently. “We would have Roy back in a heartbeat,” she says. “If the right circumstances come up and the right storyline presents itself, absolutely.” 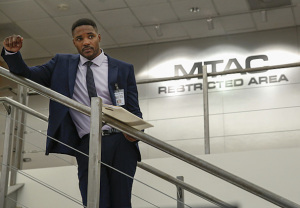 Question: I’m starting to feel NCIS withdrawals kicking in, so I would love any scoop you can share. —Michelle
Ausiello: I can report that Duane Henry won’t make his series regular debut as MI6 officer Clayton Reeves until the fifth episode of Season 14, which kicks off Sept. 20. (Speaking to the few who carped about his English accent during his end-of-Season 12 debut, Henry advises, “You just have to slow your ears down a bit,” before adding very playfully: “We invented this bloody language, so leave me alone!”) Emily Wickersham meanwhile is happy to have new series regular Jennifer Esposito with her up in the big orange room, whereas Pauley Perrette’s Abby is almost exclusively stationed in the lab. “To have another girl around every day is fantastic,” Bishop’s portrayer reports. “The squad room dynamics are totally different. It’s awesome.”

Question: I got weirdly excited when I read that Sarah Salvatore is coming back to The Vampire Diaries. Any idea what brings her back to Mystic Falls? –Chris
Ausiello: That’s a good question, Chris. So good, in fact, that we posed it to executive producer Julie Plec, who offered this cryptic response: “It’s actually a mystery what brings her back. It’s seemingly disconnected to everything, and yet when we realize the what, we understand that it’s tied into exactly what the villain is attempting to do.” I’m curious to hear how you interpret that — once you’ve re-read it a few times, of course. 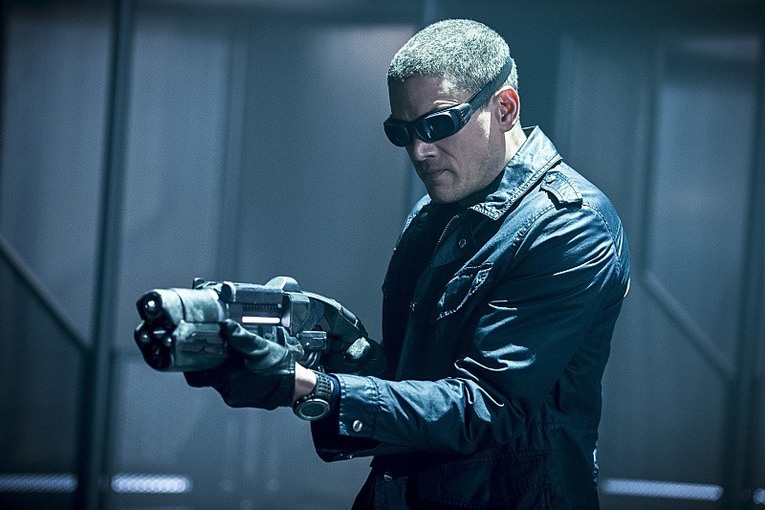 Question: Tell me Snart isn’t really dead on Legends of Tomorrow! Tell me there is some way to get him back! —Paige
Ausiello: The Leonard Snart that traveled with the team in Season 1 very much perished as a hero. But as you know by now, some version of Captain Cold belongs to the Legion of Doom that is set to vex the Legends this fall. As such, you can count on some double takes. “I’m very excited to see Rory meet whatever incarnation of Leonard Snart we might choose,” says showrunner Phil Klemmer. “It will be a chance to watch our barely reformed arsonist threaten to backslide.”

Question: Obviously I would love everything you know about Hawaii Five-0 Episode 150, but I’m curious about the after too. Will that ep change something? What can of worms will it open? —Lisa
Ausiello: “It’s really a mythology episode,” showrunner Peter M. Lenkov told Matt Mitovich, seeing as it deals with McGarrett’s mother Doris (played by the returning Christine Lahti) and Wo Fat’s father, as well as his on-and-off relationship with Catherine (Michelle Borth). “It will tie up some loose ends,” says the EP, “and spark a new storyline in the episode that follows.”

Question: I just watched your Comic-Con interview with The Walking Dead cast. I loved it. And I especially loved your t-shirt. Could you please let me know where I can get one please? —Pixie
Ausiello: You mean the one Norman Reedus was so enamored with he gave me $20 for it? The in-demand tee can be purchased here. Tell them you’re an Aushole and then luxuriate in the awkward silence that follows. 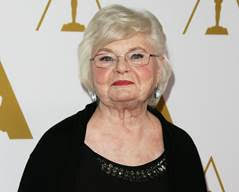 Question: What guests stars are we going to see in the final season of Bones? —Mindy
Ausiello: I already told you that beloved TV vets Ed Asner and Hal Holbrook will be appearing in Season 12’s third episode. But what I didn’t tell you — because I was saving it for Ask Ausiello — is that they’ll be joined by Oscar-nominated actress June Squibb (aka Sheldon’s Meemaw on Big Bang Theory). Squibb will play a retirement home resident you do not want to make angry.

Question: Do we know yet if Bones‘ series finale (sniff) will be two hours? —Sarah
Ausiello: As of now it’s just a one-hour episode, but, you never know — Fox could schedule the penultimate episode on the same night and call it a “two-hour Bones finale event!” Meanwhile, co-showrunner Jonathan Collier is still hoping series creator Hart Hanson will “either write or co-write” the swan song (possibly with former EP Stephen Nathan). “He’s been very, very, very involved in discussing the series,” Collier adds of Hanson. “He’s the best person in history to inherit a show from because he gives you his blessing. He’s handed over the show to us, but he is also very available to us.” BONUS SCOOP: Cam and Arastoo’s nuptials will be a decidedly low-key affair. “I think [we had our] big wedding with Brennan and Booth,” says Collier. “So let’s just say that it’s going to be exciting and different.”

Question: Ausiello, do you have any spoilers regarding FitzSimmons on Agents of S.H.I.E.L.D.? Thanks! —Jessica
Ausiello: Having finally landed on the same page in the May finale, “They’re going strong, in a solid relationship” when Season 4 opens, says co-showrunner Maurissa Tancharoen. Though conspicuously MIA after the season-ending, six-month time jump, “They did not have the opportunity to go to the Seychelles,” the EP notes, “but they’re working together, living together…. And of course with that comes some challenges.”

Question: Please, please, please tell me — is there a Stars Hollow town meeting in the Gilmore Girls revival? I really need a town meeting. —Dana
Ausiello: Someone’s gonna feel really silly when they see this photo that was released three months ago.

Question: Now that Conrad Ricamora has been promoted to series regular on How to Get Away With Murder, will the Keating Five become the Keating Six? —Darrell
Ausiello: We’ll find out in the ABC thriller’s Sept. 22 season premiere. “That’s the question of the first episode,” confirms showrunner Peter Nowalk. “Oliver really wants to be folded into the group. He has a naughty side and he sees the fun in the dark. But [boyfriend] Connor, as we’ve seen, is against it. Also, the question remains, does Annalise want him anywhere around her? So we’re going to address that in the first episode.” 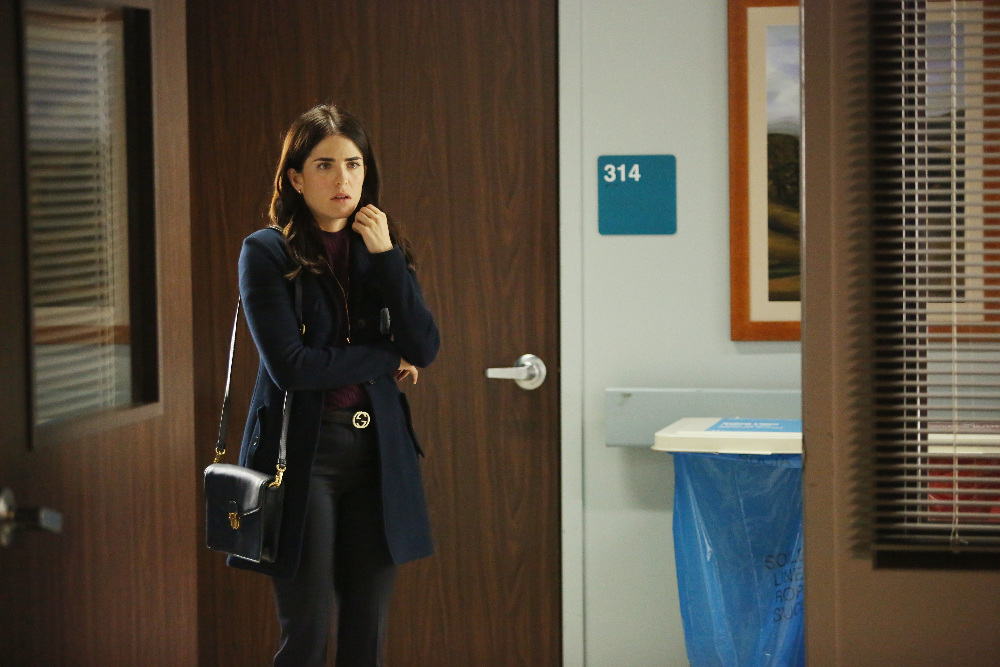 Question: Any intel on who Esai Morales is playing on How to Get Away With Murder? —Joshua
Ausiello: The even money’s on Laurel’s (Karla Souza, right) dad, but Nowalk will only share that the NYPD Blue alum will be a “very prominent part in the show.”

Question: How long will Mary be sticking around on Supernatural? Is Samantha Smith a series regular? —Amanda
Ausiello: She’s not a regular but showrunner Andrew Dabb confirms that Sam and Dean’s mom “is certainly a presence for a while,” adding, “She’s not a one-episode character, let’s put it that way. That’s something we’re going to explore over the course of the season.”

Question: It has been very quiet on the Sleepy Hollow front since the writers went back to work. Have you heard any scoop on Season 4? — Debbie
Ausiello: I have it on good authority that a villain you’ve been jonesing for will be back in action in one of the season’s first episodes, tentatively titled “Heads of State.” Draw your own conclusions.

Question: Any news on Masters of Sex Season 4? —David
Ausiello: If the darkness of the Bill/Virginia/Dan triangle (not to mention that zoo scene) brought you down last season, Caitlin Fitzgerald says the upcoming Season 4 will pick you up, being “a lot lighter and funnier.” Evidence? “I haven’t cried one time. I barely recognize this character!” She adds that Bill’s long-suffering Mrs. does experience “a lot of righteous anger” and shares “a tingle” with the lawyer character played by About a Boy’s David Walton — who she acted opposite on New Girl last season.

Question: What can you tell me about this new season of You’re the Worst? —Amanda
Ausiello: In the Aug. 31 premiere, Kether Donohue’s Lindsay does something so outlandish and insane — even for the FXX comedy — that at first I thought it was part of a dream sequence. (P.S. It’s not.)

Question: Could you find out what Iris’ role in The Flash‘s Flashpoint story will be? —Kelly
Ausiello: “She is still a journalist,” co-showrunner Todd Helbing points out, before adding cryptically, “But she’s doing something else as well.” Adds EP Aaron Helbing: “One thing about Iris is she’s always Iris. She’s always a constant. Just like on Earth-2, she was a cop, but she’s still married to Barry. There always and still is a Barry/Iris dynamic, but it’s slightly different.”

Question: Can you please, please give me any information on Jane the Virgin? —Bev
Ausiello: Some exclusive Season 3 casting news for ya: Miles Gaston Villanueva (Young and the Restless, Chasing Life) has been cast as Sam, an old crush of Jane’s that predates her relationships with Michael and Rafael. Intellectual and sexy, Sam’s past connection to Jane has a surprising impact on the present (where Michael is presumably fighting for his life, although he’s apparently not fighting too hard considering Brett Dier had enough lines in the premiere to warrant showing up at the first table read!)

This AAnd That…
♦ Remind me to tell you the real reason this recast happened. It’s a really funny story.
♦ It’s been two weeks since I attended the TCA Awards and I’m still confused/saddened as to why not a single member of the black-ish cast, nor the show’s creator, showed up to accept their much-deserved best comedy trophy. I need someone to explain to me what happened so I can move on with my life.
♦ Trying to get my hands on the Darth Vader version of this figurine. If you — or someone you know — is in possession of it please contact me. I’m prepared to meet any/all demands.