The Keating 5 is officially a sextet.

How to Get Away With Murder has upped Conrad Ricamora, aka Connor’s tech-savvy boyfriend, to a full-fledged series regular, TVLine has learned exclusively. The promotion takes affect at the start of the ABC thriller’s just-ordered third season.

Ricamora joined HTGAWM in Season 1 as a recurring guest star and quickly emerged as a fan favorite. In fact, last 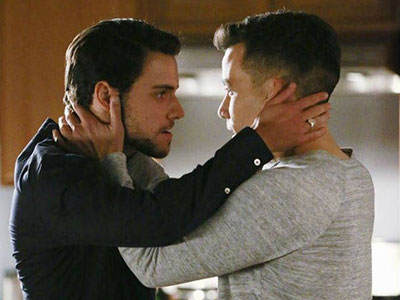 November when it looked like Oliver’s days were numbered, viewers registered their disapproval on social media.

“There was a real outpouring of love and concern for Oliver, and a fear that he might killed off — but a lot of it was done in a very over-the-top way,” Ricamora told TVLine at the time. “One person threatened to fight [showrunner] Pete [Nowalk]. Someone else said they were going to throw their TV out the window if my character died. There were a lot of memes, too — even ones with Beyoncé.”

In Thursday’s Season 2 finale, Oliver was seen deleting Connor’s acceptance letter from Stanford — then impersonating his boyfriend in a phone call to the California law school’s Dean of Admissions in which he told her not to call him again. The duo have experienced increasing tension over Oliver volunteering his hacking skills to assist in Annalse’s cases — a moonlighting gig that led Oliver to quit his full-time job in the season’s penultimate episode.

“[Oliver] has a new lease on life… not only meeting Connor, but also his [HIV-positive] diagnosis,” HTGAWM showrunner Pete Nowalk tells TVLine. “All of it has made him look at his life and say, ‘What do I really want?’ He wants a little bit more excitement. He wants to feel passionate about his job. He doesn’t want to be bored.”

Hit the comments with your reaction to Ricamora’s status change!