Holly? You in danger, girl.

Because not only do you start swimming in waters waaaaay out of your depth in this week’s Power, you do so in a move that is in direct opposition to everything Tommy has asked of/told you. And while your soulmate is not quite at Ghost levels of lethal (yet), he’s close enough that defiance is a major no-no.

In other news, James St. Patrick wants you to be his Snapchat friend. Read on for the highlights of “Don’t Worry, Baby.”

TICK-TOCK | After a rather athletic sex session that’s so good it makes Tommy literally drool (Joseph Sikora for the unafraid-to-go-there win!), Holly once more raises the fact that her man has not followed Lobos’ orders and killed Ghost. She not-so-subtly suggests hiring a hitman, an idea Tommy shoots down quickly. “Lobos told me to do it,” he reminds her as he gets dressed and heads out to collect cash from his sellers. “Our product’s like a sore d—k,” he says by way of parting bon mot. “You can’t beat it.” 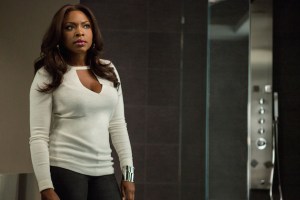 Later, Tasha watches Holly pour out some wine and quickly realizes that the redhead’s got a little Egan baking in her oven — and Tasha is advises Holly to tell Tommy ASAP. Meanwhile, Tommy and Tariq have a rather sweet bonding conversation in which Ghost’s son is reminded that his “Uncle Tommy always got your back. Forever.”

INSIDE JOB | In Washington, a still-not-100-percent Kanan interrupts Jukebox planning her big job with her group. There’s a little smack-talking, and he wants to be part of the heist, but Juke wonders if he can even hold a gun with his beat-up hands. So later, Candie strips off her top to get Kanan riled up, then… make him prove he can use his hands. On himself. And then her. “His hands work — both of ’em,” the Texas Tea’d-up lovely later informs her girlfriend.

So Kanan is deemed ready for Juke’s job, which turns out to be the armed robbery of a jewelry store where one of her operatives works. But Kanan shoots that guy in the head right after he opens the safe, and with Jukebox radioing in bad info about the getaway car, there’s virtually no way they won’t get away with the crime(s).

Later, during celebratory lap dances at a strip club, Jukebox drops two knowledge bombs on her recuperating cousin: a) she knows he’s been messing around with Candie, and she’s not bothered; and b) she suggests that maybe killing Ghost isn’t the best plan (aka maybe he’s more useful alive). Then she tells Kanan it’s time for him to go home.

GHOST MULTITASKS | Ghost’s week goes something like this. Cut down on heightened security measures at the clubs, but maintain personal detail “just to be safe.” Get mad at Angela for getting Tariq’s record expunged and then for going straight to (an unimpressed and unmoved) Tasha to tell her about it. Pay Angela’s rent without telling her. Have an uneasy dinner with Angela and her sister, Paz. (Aw, hi Elizabeth Rodriguez!) Get chastised by Karen Bassett for having no social media presence. (I love when he tells her, “My brand is the mystery of James St. Patrick,” and she’s all, “Yeah, no, you’ve gotta get on Twitter, dude.”) Build aforementioned social media presence in a few days (!). Slip out for the aforementioned Tommy-saving. Shut down a tipsy Angela’s very sobering doubts about their relationship by saying, “I’m not letting you go.” (No, seriously, Ghost — follow me back?)

Oh, and on the federal side of things, Angela does some poking around that could mean serious trouble for Lobos/Sandoval, and Greg tracks down Ruiz (the guy with the underage daughter who was dating Nomar in Season 1) and really wants him to give up Lobos’ entire (read: including Ghost) network.

DUCK! | During a trip back to the block, one of Andre’s friends tells him that Jae Shin’s son — the guy missing a finger, thanks to his father’s discovering that he was watering down the product — has put a hit out on Tommy and is planning to plug him outside the dirty priest’s church that night. Dre shares the intel with Ghost, who, when he can’t get Tommy to answer his phone or texts, slips out of a big night at the club to run over to the church and save his best friend’s life. (Though Tommy, who ducks behind a car and gets grazed by one of the many bullets coming at him, doesn’t know Ghost was his savior.)

Back at home, Tommy is sure that the attempt was Lobos making good on his promise to kill him. So Holly leaves, telling him she’s going to the drugstore… but she really goes to the Jamaicans’ restaurant and pays for one of their assassins to kill Ghost.