The scars up and down his arm prove he’s no Teflon don, but man, is Power‘s Kanan a survivor or what?

I don’t endorse his methods or motives — the guy is still a pretty cold-hearted individual — but you’ve got to toss a little respect to someone who can survive prison, a knock-down-drag-out with his former protégé and a building fire. Plus: Kanan being alive complicates things for Ghost, and the more complications in James St. Patrick’s life, the better Power gets.

Read on for the highlights of “I Got This on Lock.”

COPS ARE ROBBERS | In Washington, D.C., a pharmacy robbery looks like it’s going to end when a female police officer pulls up outside the store and seems to have everything under control. But after the clerk mentions that he triggered the silent alarm, she shoots him (!) and one of the thieves (!!), whom she clearly knows. Then she calls in the crime to the station, making it seem as though the robber killed the clerk and then she killed the robber.

At home, the cop — who is being lauded as a hero by the local news — tosses the surveillance tape onto a table and hands a few bottles of cough syrup she stole to her girlfriend. Then she goes upstairs to check on someone sleeping: It’s Kanan, in bad shape after his run-in with Ghost in the season finale.

Turns out, the crooked cop goes by the name Jukebox and she’s Kanan’s cousin. Her lady, Candie, says she’s a nurse but doesn’t seem to do more than hang around the house in sex-on-a-stick outfits and sip her Texas tea, which Google tells me is another name for purple drank, which is another name for “gets you messed up right quick.” Though Kanan doesn’t want to tell Juke the truth about how he got hurt, he eventually admits that Ghost did it and that Kanan killed Sean because “he picked Ghost over me.” Oh, and it looks like Jukebox is planning a big, illegal job — and Kanan wants in. 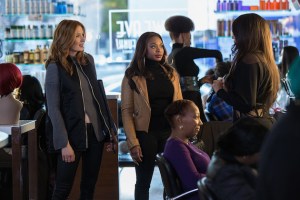 IN WHICH TASHA SCHOOLS EVERYONE | Back in New York, Angela and Jamie are deluding themselves that their problems are nearly behind them. “We’ll make it work and we’ll be a family,” he assures her — but Greg is still watching Mr. St. James like a hawk with a grudge, and when he confronts Angela about Ghost being outside Tommy’s apartment one night, it’s all she needs to tumble into her weekly Chasm of Angst Over Dating a Criminal.

Meanwhile, Tariq brings the gun he stole from Angie’s closet to school, and gets caught. The look on Ghost’s face when the headmaster announces under whose name the weapon is registered is good, but Tasha’s (totally righteous) anger over her son’s impending expulsion — namely, the disparity in the way white and black students’ violations are handled at the school — is a thing of beauty; it saves Tariq from getting kicked out of the institution completely. Later, Tasha makes it perfectly clear to Ghost that their kids will never visit Angela’s apartment again.

The transfer of rage continues later that evening, when Ghost confronts Angela about his son having access to her gun. She counters by asking him about what Greg told her; Jamie cops to having been at Tommy’s, but swears he didn’t see his old friend/former business partner. Once more, Jamie swears his fealty to the ticked-off AUSA: “I had to pick between Tommy and you. I picked you.” Still, things — as ever — are not OK between the lovebirds. (Side note: Am I the only one who’s really relieved that Tariq didn’t somehow shoot someone or himself?)

TOMMY JR. ON BOARD? | Speaking of Tommy, he and Tasha hatch a plan to clean the drug profits via a hair-weaving enterprise based out of LaKeisha’s salon. “You gonna be the McDonald’s of weaves,” Tasha tells her friend, talking a big game about how much money they’re going to make but leaving out the part about the drug cash. Elsewhere, Julio gets a tip that the Koreans are cutting Lobos’ product with some inferior stuff; when Tommy brings it to the attention of Jae Shin, he quickly deduces that his son is to blame (and was pocketing the extra money he made). So Jae Shin makes his son cut off a finger, Yakuza-style.

Even though LaKeisha hates Holly for stealing Tasha’s earrings back in the day, Tasha herself seems to be warming to Tommy’s woman, whose histrionic tendencies help them evade trouble when a cop pulls Tasha over. Holly puts on her best Sympathetic Soccer Mom voice and explains that Tasha is her nanny, who’s speeding home at her insistence. Add in Naturi Naughton’s very fun accent skills, and the potential problem is quashed.

But the laughs end later, when Holly takes a pregnancy test and it comes back positive. She gets rid of all of the evidence and lays into Tommy once more for not having killed Ghost yet. But he gets a text from Tariq and heads out — his concern for Ghost’s son is one of the most genuine, sweet things on this show — before she can stop him.

GHOST, REBUFFED | When Tommy arrives to meet Tariq, he realizes that Ghost sent the message from his son’s phone: It was the only way he could get Tommy to talk to him. “Lobos wants me dead,” Ghost announces, adding that he’s sure the drug kingpin is using Tommy and that they should work together to bring him down. After all, if “he tries to kill me, you’re next,” St. Patrick reasons. But Tommy has had it, and refuses to answer when Ghost asks, point-blank, “Is Lobos coming after me?” Tommy merely turns his back, saying, “Goodbye, Ghost,” as he walks away.