For months now, Power has been telling us that “Ghost must die.” This week’s episode brings home the point that if/when James St. Patrick goes to that big nightclub in the sky, Tommy probably won’t be the one who holds the velvet rope aside for him.

Yep, Tommy gets the perfect chance to off his former business partner — per Lobos’ orders — but finds himself literally unable to pull the trigger, a failing he fears will leave him and Holly deader than their pooch once jefe finds out. (Too soon?) And then Tasha gets involved, and who else is thinking this could become a very complicated thing very soon?

Elsewhere, Angela goes from sophisticated lawwoman to nervous dork in 10 seconds flat, thanks to Jamie’s kids, and Ghost finds competition where he least expects it. Read on for the highlights of “It’s Never Over.”

‘CLOSE THE ISSUE’ | Working off Julio’s tip from last week, Ghost tasks Proctor with finding out what the heck is going on with Lobos. The lawyer rather quickly comes back with intel we all know: death certificate, John Doe prosecution, closed trial, for his safety, yadda yadda. (Side note: Stellar work, Feds, on keeping this whole Lobos thing quiet: I feel like, by Episode 4, Baby Yasmine will be the only one who isn’t aware that the drug kingpin is alive, well and chillin’ in federal custody.) The only thing that’s unknown? Where, exactly, the mastermind is at the moment.

“You need to ask Angela how to find Lobos so you can close the issue,” Proctor says, but Ghost flatly refuses. Meanwhile, Assistant United States Attorney Saxe has an idea: Find Lobos’ attacker — who, you’ll recall, they believe was hired by the Jimenez — and get him to confess, adding yet another charge to the pile when the AUSA’s office eventually brings down that crime lord.

This development makes Sandoval very nervous: If Lobos’ attacker says Ghost put out the hit, there’s a good chance that Ghost will turn witness and testify against Lobos. And because Sandoval is in Lobos’ pocket, that’s terrible news for him. What a coincidence, then, when the inmate who stabbed Lobos is killed himself in a quick prison ambush just before Saxe can interview him!

WHERE’VE YOU BEEN? | The inmate’s death troubles Angela, which we’ll get to in a minute. But first, you have to know a few things. First, Angie gets schooled in childproofing her apartment by Tasha — who approaches the whole endeavor as though it tires her — in preparation for the kids’ visit that weekend. Second, Angela loses ALL her chill upon meeting Jamie’s children; it’s kind of awesome to watch the sleek, sure Ms. Valdes turn into a ball of nervous energy in front of a couple of teens and a toddler. But the visit goes pretty well, even when Jamie gets a text and has to scoot, leaving his lady alone with his kids. The only potentially troubling bit? Tariq snoops around in Angie’s closet and finds her gun, and you know what Chekov had to say about that type of thing…

Alone in bed later, though, Angela broods as she thinks about Jamie’s absence and how it coincides with the murder of Lobos’ attacker. Funny enough, in this case, Señor St. Patrick is innocent-ish.

GUN SHY | That’s because he leaves Angela’s apartment to see Tommy, who texts that he wants a meeting. This is a big deal; earlier in the episode, Ghost asks Tasha to ensure that Tommy gets a check for his half of the business, because his former partner won’t return calls or messages. But when Ghost arrives in Brooklyn Bridge Park, Tommy is a no-show, texting that something came up.

In reality, Tommy is a shaking, sweating mess of a man who arrives at the park to shoot his best friend in the back but then at the last minute can’t bring himself to do it. So he ingests a ton of blow, beats up one of his employees and winds up crying at home, where Holly finds him. 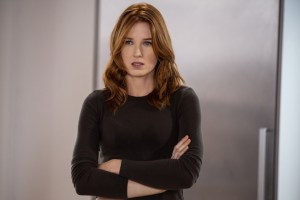 He tearfully admits that their dog isn’t missing, like Holly had thought: The pup was killed as a warning, and the two of them are next, because he just can’t ’86 Ghost. She bucks him up in that incredibly annoying-yet-touching way she has, imploring him, “If you can’t kill Ghost for yourself, do it for me.” So he promises he will.

Just then, a knock at the door has Tommy ready to dive under the coffee table, but Holly confidently runs over to open it, because she knows it’s Tasha, whom she’s asked to teach her how to keep the books for the illegal business. “I hear you have a problem,” she says, sashaying into the room. “Apparently, I can help?”

MEET THE ENEMY | Meanwhile, James makes a big show of comping some high rollers who are living it up at Truth. He invites them to the opening of Verbatim, bragging that he got DJ Taj to spin at the event. So imagine his surprise when Taj backs out of the gig on the day of the event, only to accept a job at the club across the street. After James rips Dre a new one for failing to secure Taj’s signature on the contracts, the two men realize that the rival club’s owners are none other than the two dudes James met at Truth. Game on! (Side note: Though I can’t promise I won’t keep responding to Sam Underwood as though he’s still playing his creepy Following characters, I certainly will try. Those killer twins stick with ya.)