Daisy Johnson will be shaking things up in Season 4 of Marvel’s Agents of S.H.I.E.L.D. — the question is, to what end?

Following the six-month end-of-season time jump, the newspaper headlines spoke for themselves: Is the Inhuman dubbed “Quake” a rogue or hero, given her association with a string of seismic, nationwide events?

Chloe Bennet tells TVLine that Daisy, as she still calls herself, “is much more thoughtful than th 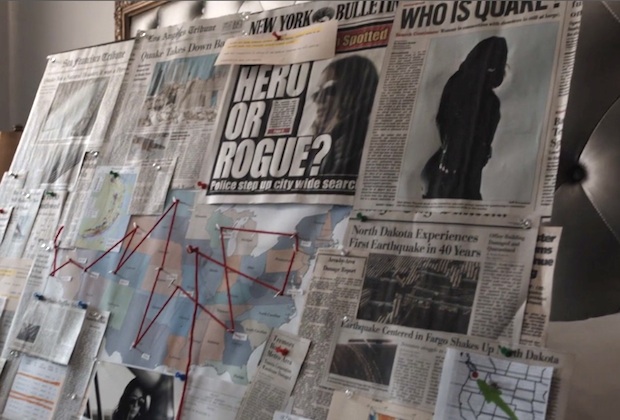 at,” to simply make (or shake) mayhem. That things may not be as they seem.

“You’ll see coming up that there might be chaos happening and buildings might be collapsing and bridges might have been broken, but people are always miraculously saved and taken care of, the bad guys always seem to be losing,” the actress shares. “I think she’s becoming more of a vigilante than maybe she would like. I think she’s trying to do good.”

So, why go “rogue” in the first place and splinter herself off from S.H.I.E.L.D., leaving the likes of Coulson and Mack to hunt down their former colleague? One need only skim a recap of the ABC series’ first three seasons to get the answer to that.

“She has a bad track record,” Bennet acknowledges with a laugh. After her mother needed to be put down, her father was subsequently brainwashed into a mild-mannered existence. On the romantic front, onetime crush Grant Ward went from traitor to beast, before being blown to outer-space smithereens in the company of her latest beau, Lincoln.

“Daisy cares so much about the people that she’s with, the people of S.H.I.E.L.D., that she feels like if she gets too close to them, something bad is going to happen, they’ll get hurt,” Bennet explains. “I feel like she’s protecting them, in a way, by going rogue.”

All told, between this new path for Daisy/Quake, big changes going on at S.H.I.E.L.D. (including new Director Jason O’Mara and a promoted Jemma) and the imminent introduction of Ghost Rider, “I feel like there’s a fresh, new start to this season. It feels different,” Bennet says. Though one cosmetic tweak is still taking some getting used to.

Quake’s look “is perfect for Daisy Season 4, but I don’t think it’s perfect for me,” Bennet admits. “But it’s growing on me!”