If you were wondering if the Agents of S.H.I.E.L.D. will welcome Bobbi Morse and Lance Hunter back into the fold, now that ABC’s Adrianne Palicki/Nick Blood-fronted spinoff isn’t moving forward, show boss Jed Whedon has six words for you. 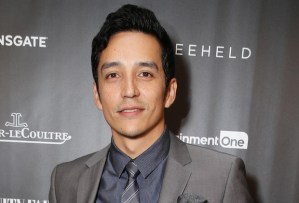 uber-cryptic Marvel fashion, precious little was confirmed for Season 4, save for a micro-trailer featuring a fiery skull and the warning, “Vengeance comes this fall” — in the form of Ghost Rider, who in Marvel NOW! Comics lore is Robbie Reyes, a mechanic who after cheating death at the hand of some thugs is revived as a demonic, muscle car-driving being with a flaming, helmet-like head. Brought to life by Nicolas Cage on the big screen (in the form of Johnny Blaze), on S.H.I.E.L.D. the chain-wielding character will be played by Gabriel Luna (Wicked City, True Detective).

“Season 4 will unquestionably be the series’ biggest, most ambitious story yet, and it all begins with the introduction of one of our greatest legacy characters in Ghost Rider,” Marvel Television boss Jeph Loeb said in a statement. “When the Spirit of Vengeance rides into S.H.I.E.L.D., it’ll change everything.”

Also during the Comic-Con panel:

* Now that Daisy has lost both of her love interests (R.I.P. Ward and Lincoln), someone new may win over her heart… eventually. At the moment, she’s “rattled from what happened, so it won’t be right away,” Whedon said. “But people find solace in other places.”

* The producers very much love Brett Dalton and Luke Mitchell, which made it very hard to kill off both Ward and Lincoln in the Season 3 finale. But “our other characters needed to go through the pain of that to tell better stories going forward,” Whedon explained (to one very disappointed young fan).