Need to catch up? Check out last week’s UnREAL recap of the Season 2 premiere, “War.”

“Just grab the craziest one, and do your thing.”

In case you had any doubt about whether UnREAL‘s Rachel retains any amount of control over Everlasting — especially in the wake of Quinn’s sly re-takeover last week — the sentiment above should clear things up promptly (and kinda bitchily).

The worst/best part? The newly demoted EP does exactly as her boss says, slinking back into her dirty-hair, kicked-puppy role and giving even more momentum to the lopsided tilt-a-whirl that is their abusive relationship… until Rach does something toward the end of the episode that is vintage Quinn. It’s admirable, how swiftly and committedly Rachel lodges that knife in her “mentor’s” back — as well as how quickly and catastrophically the situation turns on her.

Read on for what takes place in Season 2, Episode 2: “Insurgent.”

RACHEL REVERTS TO FORM | There’s about five hours of “hard” (aka camera-shootable) night left on Everlasting‘s first day, but sure, Rachel: By all means, crawl off to the dark corner of the set where you’re probably living, throw away a pharmaceutical care package sent by your worried mother, and nibble on stale donuts until Quinn’s voice rouses you via walkie-talkie. When Goldberg finally reappears, she’s told to do what she does best: Find the girl with the least self-respect/-esteem, take whatever she’s got left, and grind it into a fine powder to be sprinkled all over the footage to make reality-TV magic.

In this case, the woman in question is Beth Ann, the slight, blonde Southerner known for wearing a Confederate bikini on social media… but who’s wearing something decidedly less incendiary in preparation for meeting Darius by the pool. “There are a lot of… other people here,” Beth Ann says by way of reason for switching her swimsuit, and it’s clear “other people” means fellow contestants like Ruby, whom production refers to as the “blacktivist,” and Chantal, the “black debutante.” Anyway, Rachel is scarily good at her job, so soon Ruby and Beth Ann are getting into it about how the misunderstood Confederate flag “doesn’t say, ‘Yay, slavery!'” (Beth Ann’s take, obv), and how the fact that the suitor is black is going to scorch Beth Ann’s grits (a bomb Ruby lobs with relish).

When Ruby runs into Jay and mentions all the things Rachel promised her — including longevity on the show — Jay says his coworker-turned-boss can’t be trusted… but he can help her “win this bitch. That’s revolutionary.” So when Beth Ann reveals her Bo-and-Luke-Duke-inspired apparel on camera just before Darius shows up, Ruby merely smiles and refuses to take the bait.

WHO STAYS? | Speaking of our footballer, Darius shows up with his entourage, and it’s not long before the “side d–ks” are grinding up on the ladies, with music blasting in the background. Quinn (rightly) reads Chet the riot act: Because he’s never actually produced the show himself, he has no idea that he needs background checks on Darius’ dudes, and having music playing in a scene is bad because it makes editing so much harder. But he counters that his show is going to be better, so nyah-nyah-nyah. Long argument short: Both Quinn and Chet move ahead with filming their own versions of Everlasting, which they’ll present to the network and let Gary decide which flavor he likes better. (Side note: Wait, how will this even work? Dueling camera crews? Won’t they get in each others’ shots?)

So let’s roll on those introductions, shall we? Beth Ann runs away when she sees Darius, and we’re supposed to think it’s because she just cannot abide being in the same breathing space as a black person, but it’s really because she absolutely adores him as an athlete and doesn’t want him to think she’s some bigoted rube. “Racism is so confusing, isn’t it?” Rachel coos to the girl. (Ha.) So when the blonde does work up the nerve to meet her idol, she awkwardly ditches her bikini top… and he does the gallant and/or image-savvy thing by taking off his own shirt and putting it on her.

Other high- or lowlights, depending on your point of view: Ruby wears an “I Can’t Breathe” t-shirt over her bikini and tries to engage Darius in some intelligent talk, but that gets old when blonde Tiffany — the “wifey” whose dad owns the team that’s Darius’ team’s rival — interrupts and she and the suitor hit it off. She’s a little worried that he’ll find out that she was about to blow his manager Romeo’s, um, mind in order to thwart what she assumed were her father’s plans to get and keep her on the show, but that doesn’t happen, and it seems like Darius actually likes her. Also a hit? Chantal, whose polite refusal of a first-date kiss earns her the title of “blifey” — aka “black wifey” — in the control room. Oh, and “Hot Rachel,” whose real name is Yael, fakes a near-drowning in the pool and then tells Madison that she’ll help her succeed as Rachel 2.0… provided the producer helps her stick around as long as possible. 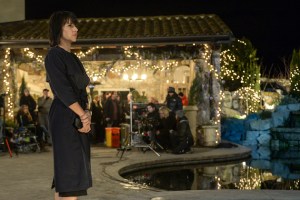 NEW KID ON THE BLOCK | So with Quinn and Chet arguing about what America wants, Darius makes his final picks, which include Chantal, Yael, Beth Ann, Ruby (with whom he seems to have real chemistry), and Tiffany. “This could be a good season after all, everybody,” Quinn crows to her team.

But what Quinn doesn’t know is that Rachel has snuck off to see the network head at his house, where she not-at-all-subtly throws Quinn and Chet under the bus and positions herself as the EP he needs to set the ship straight. Oh Rach, honey, A+ for effort but D for desperation. And when Gary shows up on set and watches the boob-filled EverlastingBlasting opening that Chet’s group has made, he’s seen all he needs to see.

As the exec announces that he’s putting someone new in charge, Rachel looks like nothing less than the faux-humbly-poof-your-hair emoji: She totally thinks she’s got the gig. But the new EP Gary names is Coleman Wasserman, who started something called “Blink” and who wants to “lean into what Chet’s doing.” UGH. You’re here five minutes and you’re already throwing Sheryl Sandberg in our face, Coleman? But this new guy proves how savvy he is when he correctly susses out that Rachel’s “baller move” didn’t quite work out for her. And because it will be a very bad decision for Rachel to get involved with this man, I predict it will happen VERY soon.