What is it about reality-show dudes whose names start with “Ch”?

This season of ABC’s The Bachelorette has a deli-meat-scarfing, ‘roid-raging Chad. And in a similarly troubling turn of events, this season of Lifetime’s UnREAL has a spear-throwing, Paleolithic-lifestyle-retreating Chet, who shows up just in time to seriously threaten Rachel and Quinn’s plan for, if not world domination, than certainly network queen bee-hood.

As much as I’d like to laugh off Mr. I-Lost-50-Lbs.-and-Found-My-Gumption’s bid to reclaim Everlasting for his own, he just may succeed. And what does that say about our two favorite lady bosses, who open the season getting matching tattoos proclaiming “money, d–k, power”? That they’re just as dysfunctional, if not more so, than they were on those lawn chairs outside Adam’s failed wedding? That they are even more terrible human beings, yet somehow more awesome, than I remembered them? That for all their talk of running the show and changing the game, they seriously do not have their stuff together?

Yeah, all of that. Meanwhile, Everlasting has its first black suitor, and Jeremy is carrying the mother of all grudges. Read on as we recap what happens in “War.” 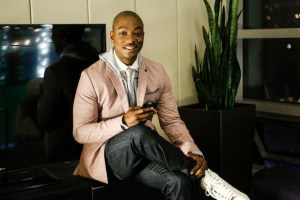 ‘HE’S FOOTBALL BLACK’ | The morning after a Vegas bacchanalia in which Quinn and Rachel successfully pitch black NFL quarterback Darius Hill as Everlasting‘s next suitor — and during which a coked-up Rachel has up-against-the-hotel-window sex with Darius’ manager, Romeo, as she chants, “The first black suitor, it was me!” — Quinn gets a call from network head Gary. Gary is mad not only that Darius is black (“He’s football black,” Quinn counters), but that he’s recently been in the news for saying, “Bitch, please” to a female reporter during a post-game interview.

Quinn correctly points out that he’d never appear on their show if he didn’t have some image rehab to take care of, and she promises 20 million viewers will tune in to watch him court a bunch of (mostly white) women whose ranks include a “hot racist” and a “terrorist.” After the call ends, a hungover Rachel points out that the show is cast, and none of the women fit those bills. So Quinn reminds her underling of their new world order: “I’m Chet, you’re Quinn. I say crazy s–t, and you make it happen.”

FRESH BLOOD | Just as shooting’s about to begin at the Everlasting house, Darius is having — in Rachel’s words — some serious “buyer’s remorse.” So she works her manipulative magic on the pro baller, who points out that he’s done everything right his entire life… until that little on-camera blowup in the locker room. “I can bring you back,” she coos. “Trust me.” So he does, and as they exchange playful “bitch, please”s, I wonder if I will ‘ship Rachel with the suitor every freaking season?

The set is in its usual disorganized chaos. First up, Dr. Wagerstein, who informs Rachel that Jeremy has been in contact with her mom, who suspects her daughter is having a “hypersexual manic episode.” Rachel shoots her the ol’ side-eye. “I’m not manic,” she says without a hint of irony. “I’m changing the world.” Still, she’s surprised when she runs into Jeremy, who’s back at work as part of the crew. She clearly expected him to stay away, given what happened last year, but he very quickly makes his hatred of her known. He adds that he wants nothing more than her total destruction, and kudos to Josh Kelly, because until now, I had no idea that Jer had this level of malevolent, misogynistic aggression deep down in him. It’s actually a little scary.

MEET THE LADIES | As the camera crews film introduction interviews, we get the lay of the land. There are various blonde wifeys in this season’s cast, of course. Yael, a brunette, is the contestant known as “hot Rachel.” Returning producer Jay decided against including a black activist named Ruby, not wanting to derail her college graduation, but Rachel couldn’t care less… and after a little sweet-talking, Ruby is on the show. There’s a woman of Pakistani descent who might have tenuous ties to Osama bin Laden, and because of that slight chance, “Now she does!” Quinn decrees. Oh, and Madison, the former PA with the braids, is now running with the big dogs. “Who decided to make her a producer, anyway?” Quinn muses in the control room. “Chet’s penis,” Rachel says, reminding her of the extra-curricular activities — and the blackmail that went along with them — that ushered the Everlasting creator out of the picture at the end of last season.

But when Madison doesn’t understand that her job is to make the bachelorettes say things they might not want to, Rachel eviscerates the younger woman and then — in a scene that is tough to watch — makes Madison parrot some truly icky interview questions in the hopes that a contestant will say something promo-worthy about her dead fiancé. After the female in question ditches her microphone and stalks off, a sobbing Madison stumbles to the side, vomits into the bushes… and then looks up triumphantly at a surprised Jeremy, saying, “That was amazing!”

RACHEL 1, SEXIST MAN-BABY 0 | Speaking of Jeremy, he makes no effort to hide his hatred of Rachel in front of the crew, especially when the subject of the “kill sheet” — aka the list of contestants getting axed, who are therefore up for sexual grabs — comes up. Quinn warns her protégé to “Suck it up” and ignore him, but Rachel instead marches over to the guys, asks who brought up the kill sheet idea (it was one of Jeremy’s crew buds), and promptly fires him. “It turns out, being a sexist man-baby on my set has consequences,” she says, and I fall a little more in love with this mess of a woman than I previously thought possible. “Handle it.”

Back in her office, Quinn is handling quite a different dude problem: A newly skinny Chet is back from some male-woo-hoo retreat in Patagonia, and he spouts a lot of nonsense about his “purpose” before stating his intention to take back Everlasting from Quinn, whom he forced into the “male role” and made a “spinster.” Her retort: “I am the queen of the frickin’ fairies, and I need you to get out of my fairy fort!” On his way out, he intercepts Darius and Romeo, introduces himself as the show’s creator… and just like that, Everlasting is missing its suitor as the cameras roll on the introductions.

A SHOT ACROSS THE BOW | The NFL star liked what Chet was selling — private accommodations, getting to hold onto his cell phone, and a sportscasting deal with the network — so he cozied up to the newly svelte interloper. So Quinn steps in, steamrolling Rachel — who, admittedly, is floundering — and grudgingly makes a deal with Chet: If he returns Darius to the house, they’ll film the intros his way (think bikinis instead of ballgowns, and poolside instead of in front of the house).

“Chet just declared war,” the EP tells Rachel, who sulkily notes that no one will respect her as showrunner if Quinn keeps stepping in and doing the job for her. Mind you, she’s trailing her boss like a dachshund begging for table scraps at the time, which does nothing to hurt her case. Quinn reassures Rachel that she’s just going to fix this Chet problem, then she’ll step aside and let baby shine. You know, that lingering final shot of Rachel’s conflicted face really makes me doubt that.

So, in summary: Quinn is Chet. Rachel is Quinn. Madison is Rachel. And I’m so damn glad this show is back.

Now it’s your turn. Grade the premiere via the poll below, then hit the comments to elaborate on your choice!