Question: Any hints on The Flash‘s Season 3 Big Bad? I’m hoping Mirror Master is introduced! —Mike
Ausiello: I’m seeing nothing firm (yet) on Mirror Master being introduced, but here’s a curious new breakdown to wrap your noodle around: For Season 3, the CW hit is casting the major recurring character of Barry’s slightly older, slightly geekier contemporary, a guy who is as smart as he is intuitive. As such, this newcomer doesn’t buy Barry’s nice guy routine and sets out to learn what he’s hiding — all while concealing some secrets of his own….

Question: I would not be angry if you dropped some Grimm intel. I would not be angry at all. —Sarah
Ausiello: Is that a threat? I can’t tell. Either way, here are two fresh scooplets: In Season 6, Eve will debut a new power, and we will finally get an answer to the question, “Who will Nick choose — Adalind or newly re-Juliette’d Eve?”

Question: I am a huge Outlander fan, and I need something on the finale. —Mindy
Ausiello: Are you sure about that, Mindy? Because, according to cast member Duncan LaCroix, the episode may run you through with an emotional bayonet. “Get your tissues ready,” he tells TVLine, saying that the 90-minute season-ender — in which the doomed Jacobite army meets the British at Culloden Moor — is going to be harder to handle than Episode 7, AKA “Faith,” AKA watch-Caitriona-Balfe-sing-to-Claire’s-dead-baby. He adds: “You’ll also see Caitriona’s strongest performance to date, as well, which is going to be off the charts.”

Question: Any hints about what’ll happen when Fear the Walking Dead comes back? —Sam
Ausiello: Yup. Showrunner Dave Erickson recently told TVLine that you can expect to meet a whole new Alicia in the back half of Season 2. Gone will be the impetuous girl who gave away critical intel over the radio to a stranger, and in her place, “We’ll see a woman who really comes of age and hopefully regains her connection with her mother and steps into more of an adult role.”

Question: Just wondering if you’ve heard anything about a Season 4 renewal for Penny Dreadful? It’s my new favorite, and I would hate to see the end of Vanessa, Ethan and company! —Holly
Ausiello: No news yet (but since Mr. Lyle’s “jaunt” to Egypt bodes well for the Mummy’s introduction in a potential next season, here’s hoping!). What I can tell you is that in Sunday’s penultimate Season 3 episode, Ethan and Vanessa finally are and aren’t reunited, the Creature takes the risk of his life (well, his lives), and Dorian has, let’s say, a strong reaction to Lily and Justine making him the odd man out.

Question: Any news on John Barrowman’s status for Season 5 of Arrow? Will he return as a regular? —Brian
Ausiello: Unclear at this time.

Question: Bones please. What’s upcoming for Booth and Brennan? —Tessa
Ausiello: By the looks of the exclusive image from the David Boreanaz-directed Season 11 finale (airing July 21), what’s upcoming for Booth and Brennan is a veritable s–tstorm at the hands of the show’s latest serial killer. (Looks like an explosion at a school, yes?) As co-showrunner Michael Peterson previously told TVLine, “It’s going to be as big a climax as we’ve ever done.” 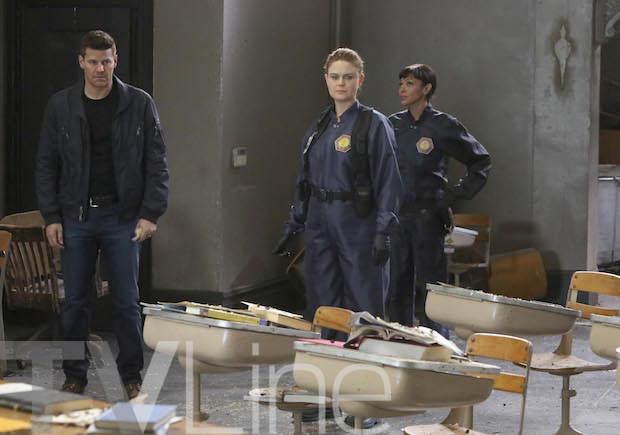 Question: You hinted that Nashville might lose a few cast members during its likely transition from ABC to CMT. Care to be more specific? —Danielle
Ausiello: I do not care to be, actually. Suffice it to say there would likely be some belt tightening if and when the show moves to CMT.

Question: What’s the deal with Empire‘s Tariq? Is he supposed to be good or bad? —Jacquie
Ausiello: Ask as simple question, get, well, a somewhat complex answer. “Tariq thinks he’s a good guy — and that Lucious is a bad guy,” says EP Ilene Chaiken, when the subject of Morocco Omari’s character comes up. “But Lucious, of course, doesn’t see it that way at all.” Whatever the case may be, Chaiken warns that Lucious’ new nemesis will be a major player in Season 3. “Tariq is very motivated, and he has a very personal grievance against Lucious. He’s not just a fed who wants to make his bones taking down Lucious Lyon — he’s Lucious’ half-brother,” she notes. “We’ll peel away layers of his story and learn why he’s coming so hard after Lucious. Hopefully, the last scene of the [Season 2] finale gave you a taste of that — that he has a real bone to pick with Lucious.”

Question: Is there any news on Tom Welling’s Section 13 pilot? Has it been picked up? —Ronnie
Ausiello: There is news, and it’s… not super. Matt Mitovich asked around, and the Smallville vet’s espionage-themed CBS project is sadly not moving forward.

Question: I love Chicago Fire and am a huge fan of Dawson/Casey. Are there any spoilers for me? — Irina
Ausiello: If you’re wondering whether the couple will get hitched in an effort to grease the wheels of the custody process with Louie, executive producer Matt Olmstead says, “We’re not averse to that. [However], it’s not something that they would do ‘shotgun-style’ just to facilitate an adoption. They wouldn’t do it just for appearances sake. If and when they do it, they’ll do it because it’s time.” Might that be, oh, I dunno, Episode 100? “We want a big episode, for sure,” the EP teases of next season’s milestone outing. “There may be something big with Casey and Dawson. We’re not going to treat it like just any episode.”

Question: Anything juicy to look forward on UnREAL (aka my summer guilty pleasure)? —JA
Ausiello: Rachel ignored former flame Adam’s phone call in this week’s Season 2 premiere for good reason. “She’s really trying to move on, do her job and get her life together,” says Shiri Appleby. “If she goes back there, it would be too many emotions for her.” So, naturally, when the ex-Everlasting suitor resurfaces later this season, “He definitely throws a wrench into things.”

This AAnd That…
♦ We called it. The ambitious young journalist named “Valerie” that Gotham is set to introduce in Season 3 is, as we predicted, none other than Vicki Vale.

♦ It pains me to report that TV’s annoying teen epidemic (see: Nashville, Masters of Sex) has now spread to Bloodline. The Netflix drama’s mostly-engaging second season was rendered unwatchable at times due to the obnoxious histrionics of Kyle Chandler’s onscreen demon spawn Jane Rayburn. On the bright side, her horrendous behavior gave us one the season’s most crowd-pleasing moment when Sissy Spacek’s matriarch boldly stepped up and smacked her to Timbuktu.
♦ Did I tell you the story about how NBC briefly considered producing a two-hour holiday-themed Parenthood reunion movie last year? For a myriad of reasons it failed to materialize, but my gut tells me the Peacock will make another run at it in the next year.
♦ There’s no “Ask Ausiello Live” this week on account of I forgot to shave.