TVLine hits rewind on the TV season’s biggest “What Happens Next?” finales, then invites you to predict the cliffhanger outcomes

Saved by the doll.

Grimm‘s Nick escaped a deadly fate — being Zauberbiest’d out of existence — in the Season 5 finale. To recount, Mayor-Elect Renard picked up a sword and ran it through Black Claw boss Bonaparte just as he was about to kill the Grimm. But here’s the rub: The former police chief didn’t do so of his own volition. Diana, his young daughter with Adalind, used her formidable, supernatural power to enchant a doll… which became a proxy for her unwitting dad. 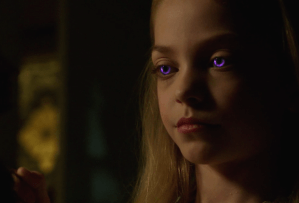 Earlier in the episode, the little girl had witnessed Bonaparte hurting her mother. And seeing as how Diana had also used her gifts to eliminate Renard’s girlfriend Rachel — another figure she perceived as threatening to her parents’ happiness — it was fitting that Bonaparte died at Diana’s hand (by way of her father’s).

But what will Season 6 mean for Renard, who was one of Nick’s allies right up until the captain’s dreams of power aligned with Black Claw’s master plan? All we know so far is that the premiere will pick up right where the finale left off, with a shocked Nick and Renard standing over the baddie’s body.

After all, as star David Giuntoli told TVLine about the episode’s closing scene, “There’s only so many ways this can go with the captain and Nick. Either we get into a huge melee, or the captain tries to somehow recruit me to his side. I don’t see how else it could go. I’m not going to say, ‘Let’s deal with this later.'”

Well, you heard the man: How do you think the cliffhanger will resolve when Grimm returns for a sixth season? Rewatch the closing scene below, then vote on your predicted outcome.