Stick a sword in it — Renard, you wanna do the honors? — because Grimm is done for the season.

Friday’s two-hour finale saw the deaths of three players, including Meisner (sniff!), and some intriguing developments for various members of the Scooby Gang. Here’s a quick recap:

Hadrian’s Wall identified Bonaparte, a Zauberbiest who helped found Black Claw, as being the insurgent group’s top man on the ground in Portland. Meanwhile, at Renard’s mansion, Bonaparte used his powers to petrify Adalind briefly, then promised to hurt her children if she ever removed the engagement ring he put on her finger as yet another means of tying her to Renard.

Diana, too, wanted her folks to get back together and stay that way. So by using her toys, voodoo-doll fashion, she manipulated Adalind and the new mayor into a hot makeout session that nearly ended between the sheets. And when the little girl perceived Rachel as a threat to her folks’ reunion, she killed the campaign manager. Remotely. By suffocating/choking her with her own sheets. 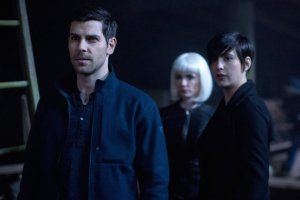 Black Claw pulled a fast one on Hadrian’s Wall by leading Nick, Eve, Trubel away from headquarters long enough for the hate group to massacre everyone left behind. Meisner fought valiantly, but he was no match for Bonaparte’s Darth Vader-like death grip — though Renard was the one who finally shot his former ally, to put him out of his misery. “You are compassionate, and that’s dangerous for all of us,” a highly displeased Bonaparte informed the new mayor.

An enraged Nick confronted Renard at the police station, which led the two men to throw down in the captain’s office. Nick wound up arrested and transferred to the all-Black Claw north precinct, where Bonaparte made him a deal: Hand over a book of Grimm lineage — which was part of Monroe’s uncle’s stash — “and you can have your son back.” 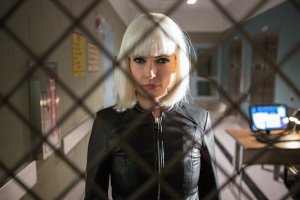 Just then, Eve and the gang descended upon the precinct, and a massive shootout followed. As the über Hexenbiest fought Bonaparte, she took a giant shard of glass to the gut and began to bleed out; Nick hurried her to the loft, then used the magic stick to heal her wound. Still, she had a violent seizure and then passed out, alarming everyone.

After Monroe, Truble and Rosalee arrived, Diana astral-projected herself into the loft and warned them — thanks to Adalind — that Black Claw was on its way to the fortified apartment. So everyone except for Nick climbed down into the tunnels to hide. That’s where it became clear that Juliette may be resurfacing in Eve’s psyche (“I feel a lot,” the assassin tearfully said to Trubel); that’s also where Rosalee chose a really inopportune moment to tell Monroe what she’d known for most of the episode: “I’m pregnant.” (P.S. He was overjoyed.)

Back upstairs, Nick fought off Black Claw henchmen (and applied the stick to himself when he got hurt) until only he, Bonaparte and Renard remained. The older man choked Nick like he did Meisner, and it appeared that this time, the former captain wasn’t going to interfere. But then Diana, via her doll, made Renard thrust a sword through the Black Claw boss — who she knew hurt her mother earlier in the episode — and Bonaparte fell to the ground, dead, while Nick and Renard stared at each other, dumbfounded.

Phew! For some insight on the supercharged, supersized finale, we turned to series co-creators/EPs David Greenwalt and James Kouf and star David Giuntoli. Read on to hear what they have to say about what’s next for the Scooby Gang.

TVLINE | The finale had three big fight scenes. Which was the hardest to pull off?
KOUF | They were pretty easy for us. We just told Bert [Barba, director] to do them. [Laughs]
GREENWALT | There is a moment of reckoning coming with Nick and the captain and lots of moments of reckoning for everybody.
KOUF | When we delivered the last few scripts, our producers’ hair caught fire.
GIUNTOLI | Relationships and fight scenes: Both of these things are kind of pains in the ass, but also very fun and worthwhile. It’s pretty fun as an actor to do that stuff. Because Nick often has to be so hurt and in such a dark place. When I’m fighting in a fight scene all day long — because it’s all day long — you just kind of do it. [Laughs]

TVLINE | I loved that Nick’s stove was used as a battering ram — twice!
KOUF | [Laughs] Kitchens are dangerous places.
GREENWALT | Whatever’s at hand! 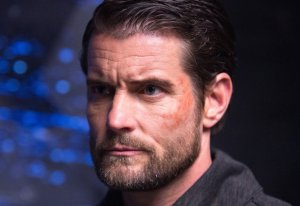 TVLINE | Meisner dies in the finale. Why did you think now was a good time for him to go?
KOUF | Well, it was just reality. [Black Claw] tricked our people into leaving HW unguarded, or down a few men, and that’s what they were looking for: the opportunity to go in —
GREENWALT | — and wipe them out. Meisner happened to be there, so he got it.
KOUF | It was too much for even him.

TVLINE | Damien Puckler, who plays Meisner, has been with the show since Season 3. What was his reaction when he found out his character was being killed?
KOUF | We actually forgot.
GREENWALT | We forgot to let him know! He found out when he got the script.
KOUF | We were so busy writing the last two that we didn’t realize when he got the script.
GREENWALT | He got it before we thought he was gonna get it. He’s a tremendous guy. For one thing, he does all his own stunts. You hear people claim that, but he actually does it… He took it really well. We don’t know how, but we would hope that he’s not gone forever. But these things have to happen.

TVLINE | So there are are other pockets of it that might be able to come in and help?
KOUF | Yes. But also, Black Claw isn’t doing too well in Portland now, either.

TVLINE | Bonaparte made Adalind wear a ring. Is that ring in play, moving into next season?
GREENWALT | Oh yeah.
KOUF| Everything’s still in play. It’s kind of a new world. There has been so much damage done to both sidesm and with what the stick does, it opens up other doors to what the hell is going on in our world.
GIUNTOLI | Can we give a little shout-out to the actor, Shaun Toub? He’s just brilliant.

TVLINE | Did the trimming of the episode order affect how you’re approaching story for next season?
KOUF | We don’t actually know what we’re going to get yet.
GREENWALT | We’re assured of 13, which is more than half the season. There may or may not be more episodes. It may or may not be the last season. These are things we don’t yet know. We’re certainly thinking of arcs for next year, and then [the episode order] will determine how long it takes to do that.

TVLINE | Will the premiere pick up right where the finale leaves off?
KOUF | Yeah.
GREENWALT | That’s the plan. Right at that very moment: What happens next?
KOUF | There are too many unanswered moments to jump ahead. 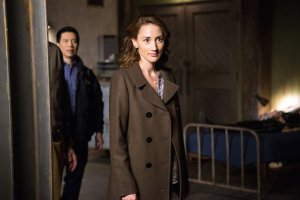 TVLINE | Fans have been wanting Rosalee to get pregnant for a long time. Why is now the right time?
GREENWALT | It seemed like a great contrast. She says, “What kind of world is this going to be?” So you have this contrast of this pure love and this horror that’s happening all around them and to people who are like them. So it’s a moment of confidence in one another. Plus, it was really touching. It was a moving, little emotional arc-ette to have in these last couple of episodes.
GIUNTOLI | Rosalee’s going to have a baby. The fans are going to get what they want. Kids are cute, but infants, you don’t want to work with. I want to be the only person soiling myself on set all day.

TVLINE | Eve showing signs of Juliette returning: What can you tell me about what’s really going on?
GREENWALT | Well, the feelings have come back.
KOUF | The stick opened up part of her. There are unintended consequences to the use of that stick. So, just like everything else.
GREENWALT | There’s part of her that was dead, that she had killed, that they had killed. Suddenly it was awakened. And because she’s a Hexenbiest, it had a super effect. So we’ll have to see what happens with the Eve side of her personality and now having all these feelings, which is going to include a lot of guilt. It’ll be complex. 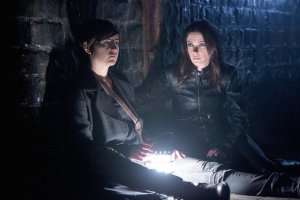 TVLINE | Nick only gets a glimpse of what’s going on with Eve, but what do you think will be his reaction when he considers that Juliette — or part of her — might be back?
I think there’s going to have to be a major come-to-Jesus moment, or a dozen of those. Because she did so many terrible things to me and my family, but you have to remember: Juliette did all of these things under the influence of a power that happened to her as a side effect of something she was doing to try to help me. How did it happen? She turned into Adalind, and it was for the benefit of Nick.

…Will she remember? Will she hear about what happened? Or does she know? And what does she feel? Look, if people weren’t literally storming my place of residence as she came to, [Nick’s reaction] would’ve happened right there. But 50 stuntmen who were hired to die were breaking into my apartment, so what are you gonna do?

TVLINE | Did you continue the scene, to shoot what happens immediately after the cliffhanger?
GIUNTOLI | We have not shot the next part of the cliffhanger… We also didn’t quite know how it was going to end. We shot alternate endings. There was a take where Renard still had the sword in his hand, there was a take where he throws it down… There’s a kiss. We shot that — in Sasha’s dreams! [Laughs]

…I think [the end of the episode] respects the audience. It could have been a cliffhanger with me being shot on the ground and then, ooh!, I come to. The stick was in my pocket! We’ve done that before. There’s only so many ways this can go with the captain and Nick. Either we get into a huge melee, or the captain tries to somehow recruit me to his side. I don’t see how else it could go. I’m not going to say, “Let’s deal with this later.”

It was pretty cool. Nick got to be a big old hero again. It had been a little while. When Nick closes the tunnel door and I’m like, “I got this!,” that’s kinda badass.

What did you think of Grimm‘s season finale? Grade the episode via the poll below, then hit the comments with your additional thoughts.