We’ve got questions, and you’ve (maybe) got answers! With another week of TV gone by, we’re lobbing queries left and right about shows including Penny Dreadful, Game of Thrones, Blindspot and Arrow!

1 | So, did The Originals‘ Detective Kinney (played by Jason Dohring) make it out of the finale alive…?

2 | What was more jarring in this week’s highly emotional Outlander: the real-looking baby Faith or Jamie’s Bastille beard?

3 | When was the last time Saturday Night Live had you erupting with laughter as hard as the shocking/dark “Farewell, Mr. Bunting” twist did? And which Weekend Update correspondents would you rather see cut from Season 42: Somebody’s Mom Deenie (played by Kate McKinnon), or Michael Che’s neighbor Willie (played by Kenan Thompson)? 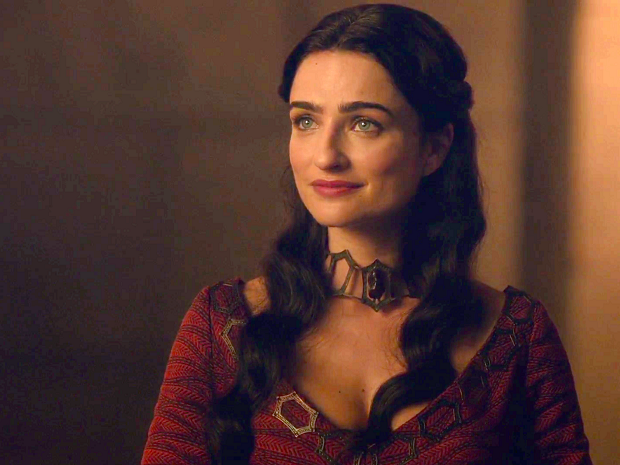 4 | As much as we’re for Game of Thrones nudity equity, did it have to come in the form of that tight shot of the acting troupe player’s (wart-y) nether regions? And does Rachel Weisz have a sister we don’t know about?

5 | Was Penny Dreadful‘s Vanessa/Creature-centric episode a stunning artistic achievement, kinda dull, or a bit of both?

6 | How many characters on Fear the Walking Dead would you have preferred to see bumped off instead of badass barber Daniel?

7 | When your Billboard Music Awards cohosts need to spend the first several minutes reciting each other’s resumes, maybe you aimed too low? Also, was Celine Dion’s “The Show Must Go On” a chilling anthem about resilience, or just this side of “Too soon”?

9 | Given the exceptional quality of Veep Season 5 thus far, have you totally forgotten that the Emmy-winning HBO comedy changed showrunners?

10 | On Fox’s Gotham, how cool was this image of Strange 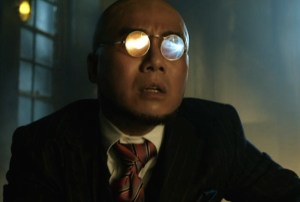 watching the Freeze vs. Firefly duel? How funny that Tonya Pinkins played Gotham’s Ms. “Not Miss!” Peabody and 11.22.63’s “Always Call Her Miss!” Mimi? And if that final image was (as some suspect) Thomas Wayne Jr., who is famously an Earth-Three baddie, can we expect a #Flotham crossover?

11 | Though we can totally understand why Blindspot‘s Weller is furious with Jane, what exactly is he arresting her for…?

13 | On Containment, was Jake’s “This is crazy, but I love her” confession indeed crazy considering that he and Katie have only known each other for nine days? Or do the dire circumstances under which they met make it more plausible? 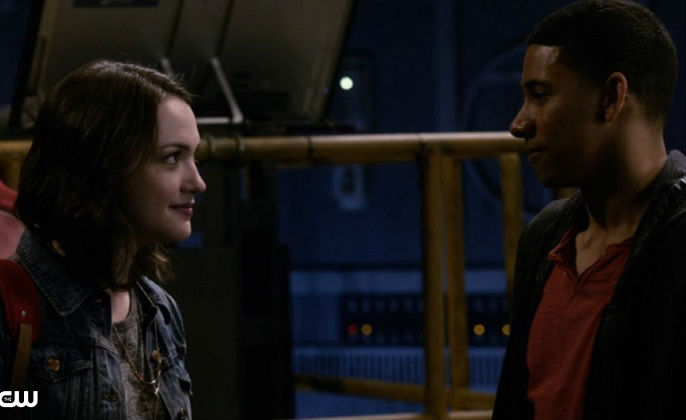 14 | Were you surprised the Flash finale didn’t feature any hints of Wally and Jesse’s potential speedster futures? Also, how did The Man in the Iron Mask get to Earth-One’s S.T.A.R. Labs?

15 | TVLine reader Katie C asks about Fresh off the Boat: “Would Backstreet Boys have been popular enough for that restaurant in the early 90s?” Meanwhile, we want to know how Eddie was able to access HBO’s free preview weekend if Jessica got rid of cable?

16 | The Real O’Neals is going to drop the awkward romance between Eileen and Vice Principal Murray when it returns for Season 2, right? Right?

17 | While we applaud Starz’s ambition to take on Sunday night, isn’t it a bit sad to lose one of the precious few sources of original, scripted Saturday programming? 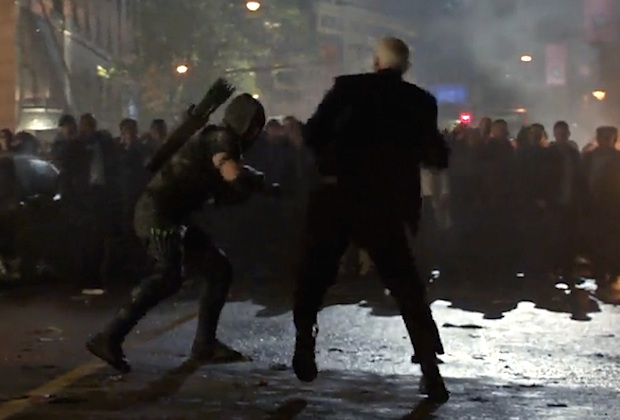 18 | During Arrow‘s final battle, how distracting was Damien Darhk’s too-tall, too-lanky stunt double (whose face was even in clear view a few times)? And is anyone concerned about the welfare of Darhk’s orphaned little daughter? (Shall we pencil her in for a Season 16 revenge plot?)

19 | On Nashville, what exactly was Cash’s impetus for encouraging Maddie to cut herself off from her parents? Shouldn’t we have gotten some kind of bead on that in the series finale? Maybe some kind of Single White Female twist?

20 | Were you expecting Law & Order: SVU’s Barba to get roughed up or killed every time he was approached by someone other than a main cast member following Munson’s indictment?

21 | What the heck did Wayward Pines‘ Theo do to deserve being put on the other side of the wall – especially considering his medical skills could’ve come in handy for the town’s tiny population?

22 | When The Americans‘ Elizabeth told Philip the rest of the Don op was up to him, didn’t you think he would go in as Patty’s angry boyfriend, not her grieving brother?

23 | How do we put an end to unnecessary after-shows? On the flip-side, which series is actually in need of one? 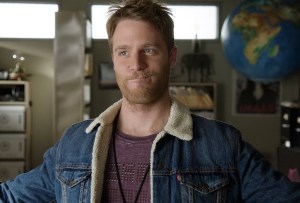 24 | Yes, “demo is king,” but isn’t it kind of amazing that CBS in the past few years alone has cancelled at least five dramas (Limitless, CSI, Person of Interest, Intelligence and Vegas) that were averaging 10 million weekly viewers?

26 | As entertaining as The Late Late Show’s “Drop the Mic” bit might be in principle, will the digs at James Corden always (and only) be about A) his weight and B) his ratings? For variety, maybe the battle should instead pit celeb vs. celeb?