No matter what Earth you live on, be forewarned that the following contains major spoilers from the Season 2 finale of The Flash.

This Tuesday on The Flash‘s Season 2 finale, a series of season-ending, heartbreaking twists were capped by the awaited reveal of Zoom’s mysterious prisoner aka The Man in the Iron Mask. 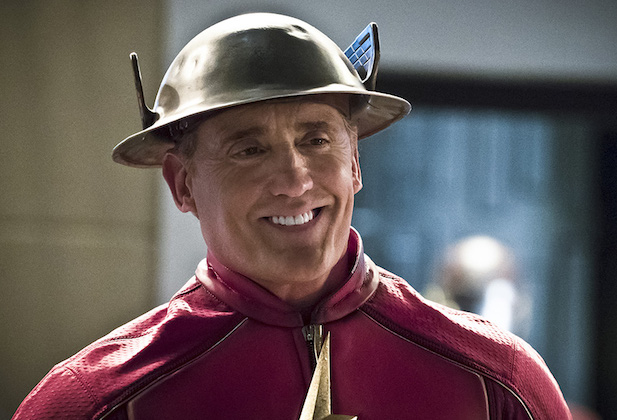 the clock struck 9, viewers learned that the familiar, hidden face belonged to cast member John Wesley Shipp, who a week prior had been killed off as Earth-One’s Henry Allen and now is playing Earth-Three’s Jay Garrick. For good measure, Shipp “speedsuited up,” once again donning a Flash costume as he did on TV in the early 1990s.

TVLine spoke with Shipp about seeing his role on today’s Flash evolve, the practical problems with wearing an iron helmet, life on Earth-Three and more.

TVLINE | When you first joined The CW’s The Flash, did you get any hint that there was a long-term plan for you, or did you assume your casting was just a knowing wink to the 1990s series?
I figured that I was brought on for a number of reasons. One, there was still a very loyal fan base for the first show — including [Flash executive producers] Andrew Kreisberg and Greg Berlanti and [DC Comics chief content officer] Geoff Johns, who informed me that they had been fans growing up with the first show and wanted to include me on some level. I figured from the beginning that my job was what they said it was: to play Henry Allen; to sort of graft my following onto Grant [Gustin], which was a joy and a pleasure to do; and to be a tool in Grant’s tool box, a place where Barry could come when the special effects stopped and really bare his soul to the audience, through Henry Allen. I figured once that was completed, and Barry had fully accepted his role as a superhero, my job was done. So, I have to say that Henry’s death this season was not a surprise to me; I was fully anticipating it. What I wasn’t anticipating was what comes next, and that blew my mind. Blew it right off its hinges.

TVLINE | If I told you 26 years ago you’d be wearing a Flash costume again, would you have believed me?
I would not. I remember the last scene that Mark Hamill and I did out in southeast L.A. at 5 in the morning. I was in the Flash suit and of course he was being The Trickster, and I was so relieved to never have to put on the superhero suit again that I ripped the wings off and threw them in the air. Mark got those wings, and he still has them — it never occured to me to keep anything. But because it was such a grueling season — we had to do practical effects, we did not have the possibility of doing so much in CGI — I swore at that moment that I would never, ever get into another superhero suit ever again. Well, now 25 years older and 25 years wiser, I know never to make those kinds of statements!

TVLINE | Had you been 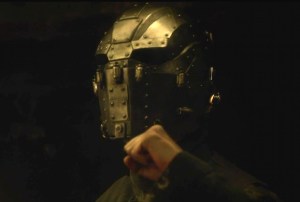 keeping tabs on this Man in the Iron Mask mystery? Were you aware of it at all?
I was, yes, because I’m very fond of that cast. I got to be in the enviable position of being both a part of the show and a fan of it, because I got to drop in, skim some good emotional material, and then sit back and watch it. Now, I have to tell you something about the [stand-in] actor who played the Man in the Iron Mask, which I find remarkable. I asked to meet him, and if you go back and watch the way he uses his hands, he was told to study three actors, and I was one of them. The Man in the Iron Mask can only communicate in the way he uses his hands, and the day that he filmed those scenes, he was told it was me that he was to be imitating. And I was told by everybody that his work was remarkable in that way. It just proves that there are no small roles. Someone who shows that much dedication, my hat was off to him.

So yeah, I knew about the Man in the Iron Mask, but I didn’t know where any of that would come down, and I certainly didn’t think it would have anything to do with me.

TVLINE | Did any tailoring need to be done to his outfit when you went to assume the role, any adjustments to the Iron Mask?
No, that’s just a big ol’ heavy iron mask and it clamps right down. The first time they put it on me, I tried to say something in a normal voice and I almost deafened myself — the reverb in there was like Yow! I was like, “I really hope I don’t have to keep this on very long, because it is so heavy and so claustrophobic.” But it’s very effective — it looks menacing! 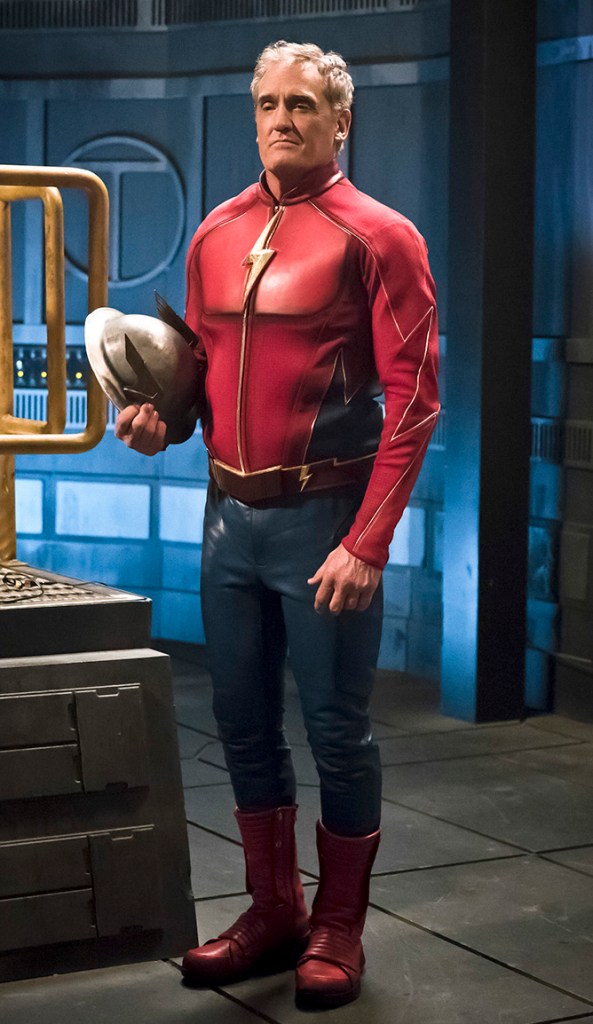 TVLINE | Have you been told anything about the show’s version of Earth-Three? On Earth-Two, for example, people tend to be opposites, there’s a “retro” veneer to the aesthetics…..
The only thing I know about Earth-Three is what I gathered from the comics, that that’s where Jay Garrick is, that that’s where these old villains go. Indeed, that’s what happens at the end of our finale — Zoom turns into Black Flash and goes off to Earth-Three, so I’ll be very interested when we get to the point of exploring exactly what Earth-Three is like and how close they’ll stay to the comics.

TVLINE | And there’s always the opportunity for you to play Earth-Two’s Henry.
He’s been mentioned but never seen, right. Listen, Greg and Andrew flew up from L.A. during the filming of the last episode, and we had a good, long conversation…. I always knew Henry Allen was closed-ended. He was there for a specific purpose, to get Barry to the point where he could fully own his powers. Henry always had a limited shelf life. But morphing into this new character, the opportunities are limitless, because, as you mentioned, there are limitless worlds, there are so many different things that could happen…. In fact, Greg told me that one reason they were so excited about having me morph into Jay Garrick is that there are so many more ways that they could use me. I can’t wait to see what they are.

TVLINE | You recently, finally had scenes with your former 1990s costar, Amanda Pays. What do the two of you make of this new Flash?
We just get together and laugh. We look at the young kids and go, “I’m so glad it’s them doing the heavy lifting now instead of us.” [Laughs] We remember the hours and hours and hours we worked on the back lot at Warner Bros. or on location…. It’s made somewhat easier now by the fact that you can do so much more in CGI, but still, for the person in the red suit…. It’s a good thing that Grant is 25 years old! [Laughs]

TVLINE | That’s what Lee Majors once told me, that being the “The” in a show’s title — The Fall Guy, The Six Million Dollar Man… The Flash — is arduous work.
That’s the best way to put it.

What did you think of the Iron Mask reveal?