Miss Part 1 of TVLine’s midseason finale post-mortem interview with Fear the Walking Dead showrunner Dave Erickson? Catch up, then join us for Part 2.

As our midseason finale post mortem with Fear the Walking Dead showrunner Dave Erickson wraps up, he reveals whether Chris was really going to murder Madison and Alicia in their sleep, hints at a crossroads in Travis’ path and a reunion in Alicia and Jack’s future, and addresses the possibility of Connor having become a very ticked-off one-armed pirate. And that’s just for starters!

TVLINE | So Chris… WTF happened? One day, he was troubled; the next, downright dangerous!
The thing with Chris is, you’ve got a kid who is a child of divorce, he has a lot of rage directed toward his dad, he’s very alienated and alone, and ironically, with all the s— going on, that’s his greatest fear: to be exiled and to not be understood and to be judged. So if you start with that, in terms of his psychology, then you throw that kid into the apocalypse and confront him with the death of his mother at the hands of his father, he came out of the gate this season not terribly stable.

TVLINE | And it was downhill from there.
Right. That [instability] gets exacerbated by his discovery of the dead and how to kill them. He finds an outlet for his anger, so there’s a certain catharsis when he’s putting down the dead at the Geary house. Travis sees that and knows this is potentially step one down a very dark path, and it worries him. But he’s also just shot Chris’ mother in the head, so it’s not as if he can actually parent. So Chris is in a very strange place where he doesn’t have, initially, someone to connect to who really understands him. He’s really kind of rudderless and lost. When he gets to Episode 3 and he’s forced to put down that man on the plane, that’s incredibly traumatizing for him, but it also speaks to the philosophy that he’s beginning to take on, and that will manifest itself in the back half of the season, which is that in this world, it’s what you have to do. The big transition for him is going from putting down the dead to putting down the living, then trying to justify and rationalize — with Reed in Episode 5. If there’s a breaking point for him, it’s that. In killing Reed, he’s basically signaled to everyone else in the family that he’s crossed the line. I mean, it’s murder, and they’re now looking at him as a murderer. So I think the level of confusion he’s suffering… that’s a lot of noise in his head.

TVLINE | Is he just plain crazy at this point?
I don’t know if I’d say he’s completely crazy, but he is overwhelmed and lost. When he goes into Alicia and Madison’s room at the end of Episode 6, I don’t think he’s trying to kill them. I think he’s trying to go back and complete what he began in the previous scene. He wants to promise Alicia, “I wasn’t trying to hurt your mother.” But then he sees the knife [that the women had handy as] protection from him, and he gets lost in that. If that gunshot had not gone off, I don’t think he would have hacked up his stepmom, but that gun did go off, and he freaked out and ran. And when Travis finds him in Episode 7, I think he just doesn’t know if he can control himself. And part of what we discover in the back half will be Chris trying to come to terms with himself in this world.

TVLINE | I assume it will be a challenge for Travis to keep it together, not just for Chris but for himself.
In terms of understanding and adapting to the apocalypse, Travis has now killed some of the dead, but he’s still trying to hold on to something. In the back half, specifically, that will be his son. So how that relationship develops or evolves is going to have a lot to do with how Travis and Chris make peace with — or don’t make peace with — the apocalypse.

TVLINE | Settle something for me: Was Alicia just playing Jack the whole time, or was there something real potentially developing between them toward the end?
I think there was, but also, look, if she wanted to go with him [rather than her family], she could have. When she goes to the deck at the end of Episode 5, she’s looking for an escape that doesn’t necessarily involve him.

TVLINE | She’d come a long way from, “Hi, total stranger on the radio, we’re on a fancy yacht, and here’s our location.”
Speaking to Jack on the radio in the premiere, obviously, was a big mistake. I know a lot of people [in the audience] were groaning at it, but it really set us up for her to be a little bit more manipulative and a bit more worldly when it came to this relationship with Jack. It’s another step in her evolution.

RELATED Preacher Review: AMC’s New Series Will Show You a Hell of a Good Time 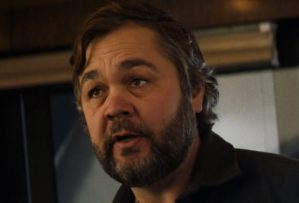 TVLINE | Talking Dead hinted that maybe Connor survived being bitten on the arm by Reed. Any chance he’s now a very angry amputee?
No, he’s gone. If you’re bitten, that’s it. You’re not gonna see a turnaround. Of Connor’s group, there’s something interesting about Jack to me and his relationship with Alicia. Alex sort of vanished into the ether at the end of Episode 5, and I’m curious to know where she went. But Connor, no, you will not see him again.

What do you think? Will Chris’ family ever be able to trust him again? Will Jack come after Alicia? Hit the comments.