Praise be! AMC‘s Preacher (premiering Sunday, May 22, 10/9c) might be just the series that fans of The Walking Dead have been complaining for two years now that Fear the Walking Dead isn’t.

Based on the comic books by Garth Ennis and Steve Dillon, the sparky supernatural dramedy circles Jesse Custer (ultra-charismatic Dominic Cooper), a reformed bad boy around whose neck his clergyman’s collar fits like a noose. But he’s got no choice but to stick with the pulpit: He promised his ill-fated father that he’d grow up to be a good guy, “’cause there’s way too many of the bad.”

In Annville, the small town to which Jesse’s returned to sermonize, the worst of the bad is Donny Schenck (Derek Wilson), a wife-beating Civil War re-enactor who’s so vile, his own son asks the preacher to kick his ass. Trouble is, Jesse’s only going through the motions, walking the straight and narrow out of obligation rather than a belief that he can make a difference. 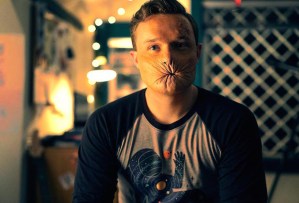 Not that he doesn’t try. He suggests — to no avail — that Sheriff Hugo Root (W. Earl Brown) investigate the allegations against Donny and offers compassionate counsel to the lawman’s son (Ian Colletti), a teenager who’s been known as Arseface since literally shooting his mouth off (see photo above). “God doesn’t hold grudges,” the preacher swears to the boy. If only Jesse were as willing to forgive his own past transgressions.

Unfortunately, he can’t even outrun them. After a thrill-ride of an entrance, during which shots are fired, punches thrown, an ear Mike Tyson’d and a cornfield turned into a maze, the preacher’s tough-as-leather old flame, Tulip O’Hare (Ruth Negga, radiating star quality from every pore) shows up in Annville. Again, Jesse does what he’s supposed to and turns down the idea of teaming up on another “job.” Yet a part of him still can’t unpack his baggage. “We are who we are,” he laments. (Fear viewers who gripe that that show has no likable characters will be relieved to discover that Preacher‘s front-and-center duo are insanely appealing, especially together. Chemistry galore!)

Now, at this point in the review, you might be wondering why the series is described as supernatural. Firstly, it includes a vampire, a rowdy Irishman named Cassidy (Joseph Gilgun) who’s introduced with a dazzling aerial fight scene that crash-lands him in Annville. (Props to co-executive producers Evan Goldberg and Seth Rogen, who directed.) Secondly, there’s a mysterious, celestial “thing,” for lack of a better term, flying around the earth and, as far as a viewer can tell, inhabiting religious leaders of all denominations like it was trying pants on for size. For the longest time, none of the holy men fit quite right, resulting in their being… well, let’s just say it doesn’t go prettily for them. Maybe you see where this is headed. But let’s get there when we get there.

During a barroom showdown with Donny, Jesse continues to do what he thinks his dad would call the right thing… until the redneck threatens to hurt his son for tattling on him. At last, the preacher gives himself permission to unleash his inner hell-raiser, and Lord, is it a sight to behold. When Jesse’s good, he’s very good. When he’s bad, he’s better. (Another side note to disgruntled Fear viewers: Preacher doesn’t lack for action. John Woo would watch this and be like, “Dude! Well done!” Maybe not the “dude” part.)

Anyway, disheartened by this latest transgression, Jesse challenges God to make His presence known, or that’s it — his next sermon will be his last. Instead, what makes its presence known is the “thing,” which zaps itself into the preacher, knocking him out cold. When he comes to days later, he finds that he can’t quit on his congregation after all. “You deserve a good preacher,” he tells his flock. And, from that day forward, that’s what he’s going to be.

Of course, what Jesse doesn’t know is that the “thing” inside him has given him the superpower of suggestion — to the point that, if he doesn’t watch what he says and how he says it, gory mayhem will ensue. What you need to know going in is that the show is funny, sexy, offbeat-as-hell and, with Sam Catlin (Breaking Bad) as showrunner, divinely dark.

The TVLine Bottom Line: By halftime, the pilot was preaching to the converted.