Grimm‘s Nick Burkhardt has spent the past few episodes harried, hunted and haunted by a betrayal, which can only mean one thing: It’s season finale time again!

At the very end of last week’s episode, David Giuntoli‘s Nick watched Sean Renard celebrate his ill-gotten mayoral victory, flanked on stage by his even more ill-gotten “family”: a coerced Adalind, Diana and baby Kelly. “You’re dead,” Nick said, clenching his fist and seething at his former boss as the screen cut to black.

As we head into tonight’s two-hour finale (8/7C), Det. Burkhardt is still “a little hot,” says executive producer James Kouf. But the EP clarifies that none of the Grimm’s anger is directed at his baby mama/kinda-girlfriend. “He realizes that this is not of her doing. He doesn’t blame her. He blames Black Claw.”

The collective of Wesen purists ups its attack in the season-ender, which finds every member of the Scooby gang — particularly Hank — feeling the hate group’s wrath… which may or may not have something to do with a big death that happens during the extended episode.

Giuntoli says buzz about the upcoming offing followed him even during a recent leisurely walk in Central Park with girlfriend/co-star Bitsie Tulloch. “One of the buskers — who was awesome, by the way — he’s like, ‘Oh, it’s the Asian guy! He turned into a [Wesen]! He’s gonna die!,'” Giuntoli says, laughing. “I don’t know about that. But I don’t think people really know who it’s gonna be.” 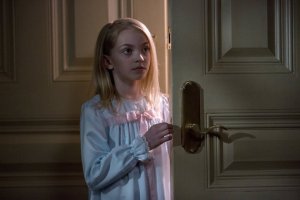 Meanwhile, Renard and Adalind — as shown in the finale preview NBC aired after last week’s episode — get a clearer idea of exactly how powerful (and uncontrollable) their little Hexenbiest/Zauberbiest hybrid is.

Despite her slight stature and sweet face, Diana “is a giant power,” Kouf says. EP David Greenwalt adds, “She’s demonstrated since she was a little, tiny toddler the power she has. But now —”

“— Now that we found an actress that can actually do it —,” Kouf cuts in, referencing new cast member Hannah R. Loyd.

“— she’s getting ever more powerful,” Greenwalt continues. “She will figure largely in things to come.”

Who do you think will meet his or her untimely end in tonight’s Grimm finale? Log your prediction in the comments below!