If Grimm‘s Sean Renard is casting about for a campaign slogan, may we suggest “Absolute Lack of Hope and Plenty of Change”?

The police captain’s bid to become Portland’s mayor intensifies in the season’s final episodes (NBC, Fridays at 9/8c), as does his mission to recruit Nick for Black Claw. It’s an uphill battle, selling Burkhardt on the benefits of a fairytale creature uprising, but Sasha Roiz says Renard is gunning to make it happen — so thirsty is he for the power promised by a new Wesen order.

“This is the first thing that has come up as a potential ascension for him,” Roiz tells TVLine, noting that while winning control of the Oregon city would be a definite achievement, “I think he’s one of those poor souls who will never be satisfied and will always be looking for another opportunity.”

Or, as executive producer James Kouf puts it: “Whoever will give him the power is where he wants to be. He’s very fluid.”

Meanwhile, Nick’s girlfrexenbiest Adalind has decamped to Renard’s place with baby Kelly, in an effort to be closer to her newly returned daughter and to protect Nick and his friends from Black Claw’s wrath. Renard’s decisions in that realm, Roiz says, aren’t quite as motivated by parental concern.

“He understands [Diana’s] a lot more than simply his daughter,” the actor adds. “She’s a key figure in this world mythology right now.” 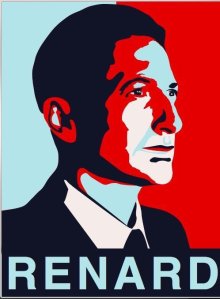 Let’s make like a politician and spin the conversation to something a bit less contentious: those hilarious, Obama-inspired Renard campaign posters.

“Isn’t it great?” Roiz says, laughing as he confesses that he has one hanging both at home and in his trailer. “I said, ‘Know what we should do? We should post them all over town randomly.'”

Oddly enough, the real Portland is having its own mayoral election this year.

“So we put Renard signs around Portland,” Kouf jokes. “We’re hoping he really does get elected. It would be great for the show.”

Press PLAY on the video below to watch Nick confront the captain about Adalind — and more! — then hit the comments with your predictions for the season finale.