‘Tis better to have loved and lost…? If that’s what you’re selling, Once Upon a Time‘s Regina probably isn’t buying, not so soon after burying another great love.

As Lana Parrilla explains in this TVLine Q&A, with Robin Hood’s selfless sacrifice, Regina has not lost just a soul mate, she’s also hemorrhaging hope, which Snow White will be the first to tell you is critical to clutch onto. Is karma at play for the formerly Evil Queen? And for the short term at least, what out-of-town caper might help distract Regina from dwelling on Robin’s death? Read on for Parrilla’s thoughts on those topics, the flashbacks that made her misty, and the new faces arriving in Sunday’s two-hour Season 5 finale (airing early, at 7/6c).

TVLINE | I wanted to first rewind a bit, talk about the recent flashbacks with little Ava Acres as Young Regina, and seeing that she and Zelena were actually loving sisters at one point….
I loved that episode. I thought it was fantastic. It made me sad, that Cora was so underdeveloped on a spiritual level that she just could not figure out how to keep these two babies in her life. She was so selfish and self-absorbed, and she had her own agenda. It was heartbreaking to see her make those decisions for these two girls who had this friendship and then found out they were sisters. For both of them to have their memory erased…. I remember when I read the script, I was bawling.

TVLINE | I loved, though, 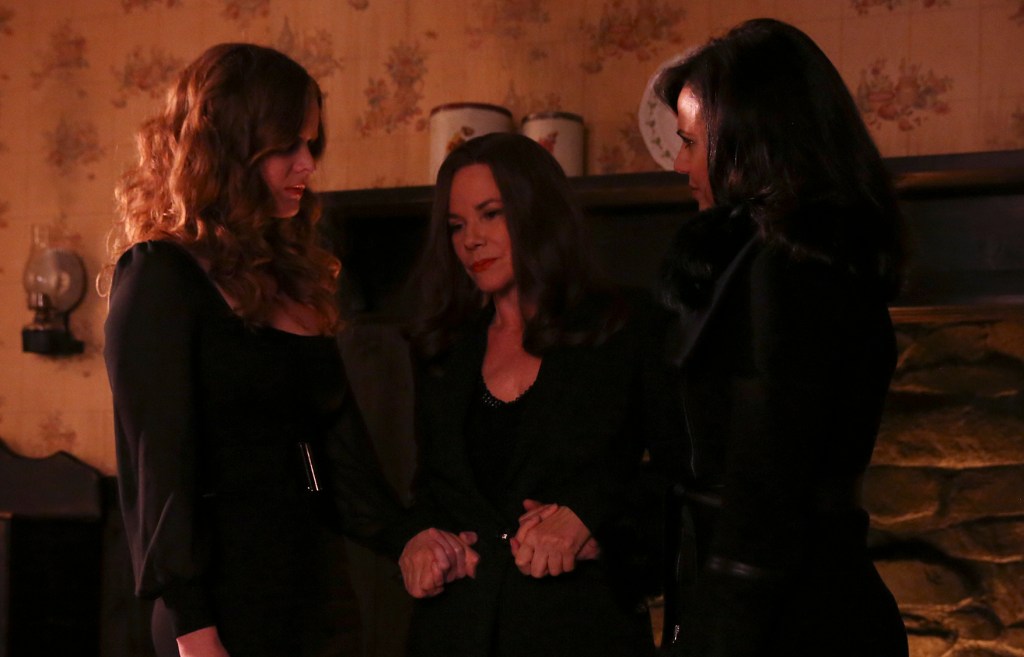 how when all was said and done, the Regina/Zelena dynamic was recontextualized.
Yes. As soon as their memories came back and we were in that farmhouse, all three of us holding hands…. That was a special scene. I really enjoyed filming that with Barbara [Hershey] and Rebecca [Mader].

TVLINE | The three of you were just fantastic in that scene.
Thank you. Thank you. I love when you have these open-ended storylines that are like, “OK where is this going? How are we going to get some closure to this?,” and then we get to actually do those scenes because it’s not only a gift for these characters but a gift for our audience that’s been following these characters over the years, rooting for their relationships.

TVLINE | Turning to current events, will Regina have any time to mourn Robin? It looks like she and Emma are running off to New York on some mission.
I think mourning will continue, over time. Regina is a very private person, she doesn’t really share a lot of what’s going on inside. Internally, she’s conflicted by so many things that she doesn’t even talk about. So I’m curious to see how she deals with this loss at this stage, at this time in her life. There’s been so much evolution, 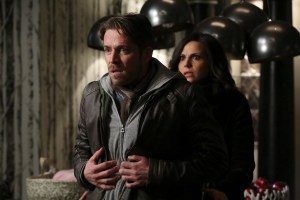 she’s come so far, she’s been in the shoes of the hero for the last couple of years, so I’m curious to see how she’s going to handle this big loss.

TVLINE | Is there any “Woe is me,” or is she bigger than that?
There’s a little bit of that. It’s not so much that she’s playing the martyr or the victim, anything like that. It’s more that she’s confused by life and feeling constantly betrayed by life.

TVLINE | “No good deeds go unpunished.”
Yeah. And she’s also getting to a place where she’s starting to believe in karma, and a lot of this I think is karmic for her. She’s done so many terrible things in her life — she’s slaughtered villages and hurt so many people — that these two loves [including Daniel] have been taken away from her. We touched upon that in an episode, I think last season, that it seems like no matter what she does it doesn’t really amount to anything, she’ll always be unhappy. And then she fell in love, so…. I think she’s probably back to that thinking, “No good deed goes unpunished,” but she’s also losing some hope. And that’s really our theme, isn’t it? Hope. I feel like Regina is in a hopeless place right now, and we’re going to see how she deals with those emotions in the season finale and also in Season 6.

TVLINE | Sean [Maguire] told me that he was a little shocked to learn that Robin wouldn’t be surviving Season 5. What was your reaction?
I was shocked, but I also understand that from this will come storytelling and the writers have a vision, and we all have to understand and respect their vision. They felt that they needed to write this story to, I think, facilitate other characters and to help move the story forward. As special as that love was for Regina and Robin, I’m really curious to see what happens with Regina from here on out — what is she going to do, and what new stories are going to come out of Robin’s death? I feel like their love transcends death; I don’t think that that love is ever going to die. He may not be on the show, but that love will still live within her. 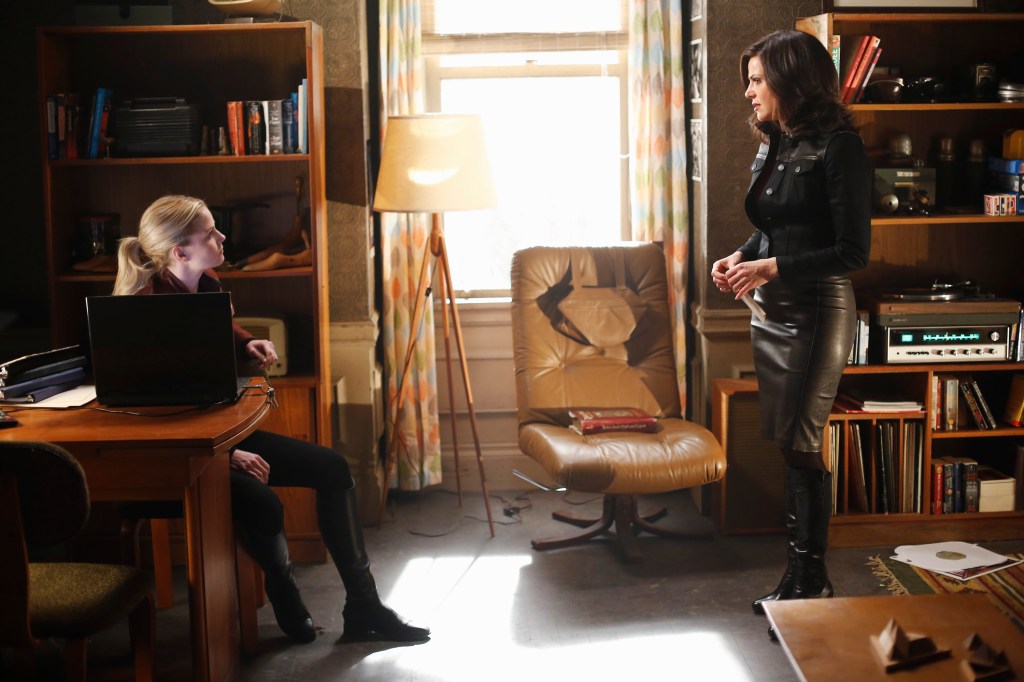 TVLINE | There are stills of Regina and Emma in Robin’s/formerly Neal’s apartment in New York. Will there be a line to address who’s paying the rent on this place, who’s stopping by to dust and ever-so-slightly redecorate…?
[Laughs] It’s very funny, I was wondering that the day that we were filming in that apartment — “By the way, who’s in charge of the rent for this place? Keeping a New York apartment for this long is not cheap!” I’m guessing we have rent control.

TVLINE | What all is Henry up to in New York? He’s worried that Regina will go back to being evil, so he’s out to destroy all magic? Something like that?
There’s a bit of that, where it has to do with Regina, but it has to do with everything. Magic has gotten us into so much trouble. It has hurt us more than helped us. Henry understands that and sees that, so he’s taking matters into his own hands to fix the No. 1 problem, which is magic. Ultimately, that’s why he goes on this journey with his girlfriend [Violet]. And we know what [destroying magic] would do to Gold, so Gold is out hunting him down. And we know that Gold’s hunting him down, so Regina and Emma band together to find Henry and save him, to stop him from destroying magic… [Laughs] There’s a lot going on! 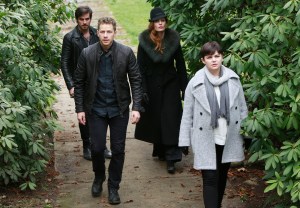 what can you tease about how the finale sets up Season 6? [Once creators] Adam and Eddy told me that Sam Witwer and Hank Harris are not necessarily playing who the press reports have said they’re playing. Will we get a sense of who they in fact are, and what the new wrinkle will be?
Yes, you will get a sense of who they are in the finale. They are both really interesting characters, and both very talented actors. I was watching the finale last night, and I was extremely intrigued by both of them. In Season 6, I think we are going to see some new villains, and some old villains are going to resurface and surprise us in ways that we weren’t expecting.