This Sunday on Once Upon a Time, as the clash with Hades came to a fiery head in Storybrooke, one hero was not left standing.

Because when the former Underworld overlord (played by Greg Germann) went to “end” Regina (Lana Parrilla) using the mighty Olympus Crystal, Robin Hood jumped in front of his love to save her life, driving an arrow into his own existence in the process.

Here, Sean Maguire shares his surprise at the deadly twist, reflects on his two season run as the Prince of Thieves and shares insight on a pair of scenes that didn’t make it to air.

TVLINE | We broached the topic of your rumored exit at February’s 100th-episode party, and obviously you couldn’t say anything. But I assume you knew back then on the red carpet?
Yes, I did, yeah.

TVLINE | What was that conversation like, to learn that Robin would not survive the season?
I was a little shocked, to be honest. I didn’t expect that, because given what the writers had written, the fans and I sort of believed there was a different path for Robin. But I have always said that my job as an actor is to serve the writing above all else. [Series creators Adam Horowitz and Eddy Kitsis] obviously have a plan for their show, and this was part of it. Obviously I was disappointed to say goodbye to my castmates because we bonded in a way that doesn’t happen very often on a TV show, but I was really disappointed for the fans. I think the majority of them believed that Robin and Regina were supposed to end up together, that there would be hope and a happy ending. But it appears the story is taking a different turn.

TVLINE | Did Lana have a particular reaction to the news?
She was upset, and surprised, and shocked…. We have a great relationship and a great partnership, and we have good chemistry. It’s always sad, the end of a job, 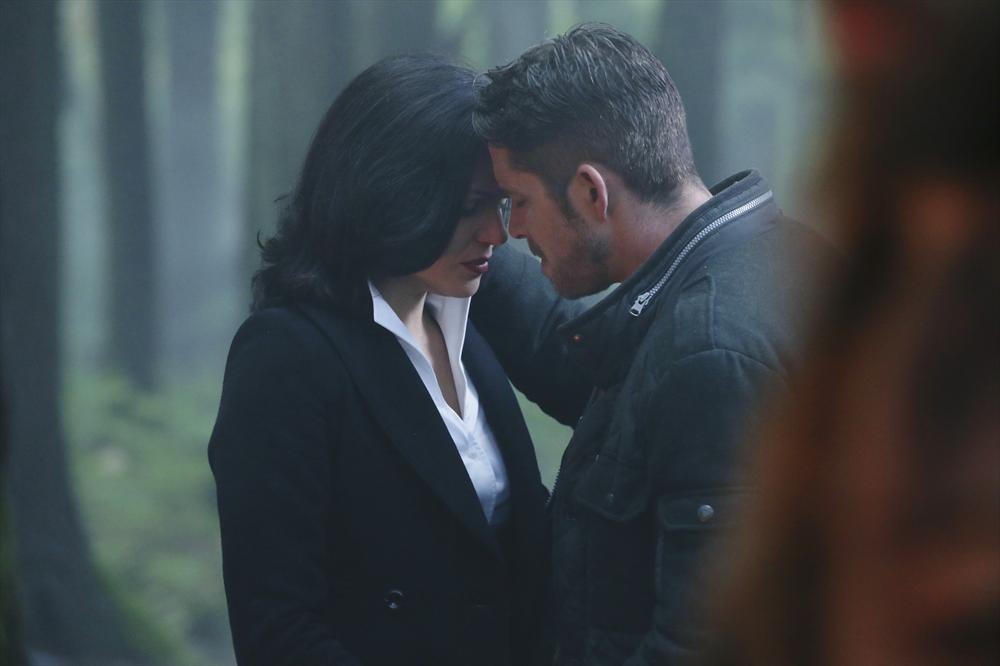 but I remember finishing on [the ITV drama] Scott & Bailey and saying goodbye to the cast thinking, “I’m sad to be leaving this one,” but then I ended up on Once Upon a Time. It will be interesting to see what adventures are next.

TVLINE | Did you get any assurance up front that you’d ultimately have a heroic death, or is that something you discovered later on?
We discussed the way in which he was going to die, and Adam and Eddy’s reasoning for it. As I said, my job is to serve what they write down. This is not a show where the actors collaborate on the writing process; it’s very much the design of what Adam and Eddy want.

TVLINE | But playing a hero, you obviously wanted him to go out doing something brave…
Of course, yes. It’s nice that he got to go out in a way that he was throughout the series, as kind of a hero.

TVLINE | Now, does a person attend their own funeral? Were you just off camera as they laid Robin to rest, making sure that enough tears were shed?
No. [Laughs] Actually on the day they were filming that, I was filming in the afternoon my last scenes with Lana, in the tunnel, where I say, “You’re my future.” It was a nice [funeral] turnout, though! There were a lot of things in the episode that ended up on the cutting room floor, I guess due to time. We had some really nice material of me with my son 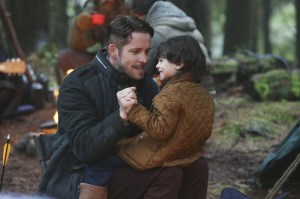 [Roland, played by Raphael Alejandro], and saying goodbye to Little John…. I was a little disappointed that the episode we shot wasn’t the one that I saw last night. But again, that’s television and there was a lot of story to tell.

TVLINE | What do you mean by his “goodbye” to Little John, if Robin died on the spot…?
Actually, that’s not correct — it was me coming back [from the Underworld] and seeing Little John. He had been looking after Roland, so it was more of a reunion than a “goodbye.” But again, because Jason Burkart (Little John) is a lovely actor, and I love Raphael Alejandro…. It would have been nice to have those scenes seen by the audience.

TVLINE | And what was the nature of the Roland moment?
It was just sweet. “Papa!” and hugging and kissing and him asking about his sister….

TVLINE | Right, he now has a little a sister to hang with!
Yeah! [Sadly] And now they’re orphans. I hope somebody’s going to look after them now that Mom and Dad are dead.

TVLINE | What will you miss most about your Once experience? I suspect you touched on this earlier, regarding the friendships formed.
Without a doubt. Two things, really: I’ve been overwhelmed by the kindness and support and dedication of the fans, and I tried to match that by going out around the world and meeting them at conventions. But my friendships with Colin [O’Donoghue, Hook], obviously, and Bobby [Carlyle, Rumplestiltskin]…. It’s very, very tough to not see 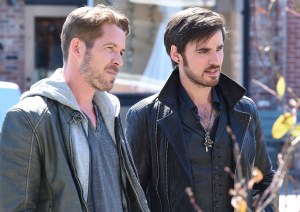 my best pal [Colin] every day. That’s probably the hardest thing to walk away from. But we’ll be friends for the rest of our lives, I’m very confident about that. We just don’t get to be a block away from each other and see each other every day.

TVLINE | Plus as you noted, as an actor from a genre-TV show, you always have conventions as a means to revisit this time of your life.
It’s a great way to see my fellow castmates. And my wife and I, my family, we love traveling. We’re going to Brazil this year, we’re going to Paris, we just went to London and Chicago…. With television you don’t get to meet the audience, you just put it out there. But the fans have been so good to me, seeing them and answering their questions has been a lovely, positive experience, so I will continue to do that.

TVLINE | Playing Robin Hood, did you learn anything about archery?
A few little bits. [Laughs] I wouldn’t say that I’m a professional or anything, but I know a lot more now than I did three years ago, that’s for sure!

TVLINE | And if Adam and Eddy ever want you back for a flashback and you’re available, is that something you’d be open to?
I don’t know…. I’ve been asked to go back to shows that I’ve been on before and I’ve never done it, because I tend to feel that once I’ve played a character, I’ve done that. But you never know. I never say never, but at the moment I’m looking forward to a new challenge and a new chapter. We’ll see!