Now, it’s entirely possible that the headline for next week’s Quantico recap will be: “Sorry, TVLine Readers, But I Had as Tough a Time as You Did Telling Who Was and Wasn’t Lying on This Show, So Here’s the Really Real Terrorist For Real.” But, absent any more left turns from the ABC drama, it looks like Liam — and not Drew, as the last episode led us to believe — is the mastermind behind all the bombings, voices and Alex-mind-effing that’s gone down this season.

How’d we come to that conclusion? Read on for the highlights of “Right.”

NOT DREW? WHO KNEW? | Alex is in Ryan’s truck, driving through the city, listening to Drew’s voice give her directions via the speakers and worrying that the nuclear bomb riding shotgun is going to be the death of her and everyone around her. Thankfully, she’s also got her own phone on speaker, so Shelby can hear everything that’s happening. And once she grabs Sen. Haas’ attention and drags her to the FBI, they both convince Miranda that Alex is a victim in all of this — and that the bureau needs to throw everything behind finding Drew.

So, with a newly re-FBI’d Caleb and Raina’s help, the FBI tracks the signal to an address… where Drew and Simon are shackled to chairs. Wait, what? Yeah, the voice isn’t actually Drew’s — or rather, it’s Drew’s, but someone else is using it to tell Alex what to do. After Simon breaks Drew’s thumb (with his permission) to free them from their constraints, Simon manages to get out before the FBI busts in. But Ryan’s team trips a bomb connected to the door, and it’s unclear what becomes of Drew in the aftermath. (Though Drew’s last-minute grab-the-mic moment helped Alex realize he wasn’t the true terrorist, it likely put his life in even greater danger.)

THE BIG REVEAL (AGAIN) | When Alex comes to a stop, the FBI bomb team closes in, and Simon tells her through the window that the bomb doesn’t have a receiver, and she can open the door without setting it off. So she does (though there’s a moment where there’s a good possibility they’ll repeat the old “you can let go of the detonator” thing from the day Elias jumped out the hotel window).

Once everyone is safe, Nimah & Co. wonder what the bomber wanted by sending Alex on this chase. And as Claire — who has suspended her campaign for vice president (side note: isn’t it technically her running mate who would make that call?) — praises Alex in a press conference, all the FBI agents get a notice that the bomb has gone missing; only high ranking agents knew where it was. Question: Was one Agent Ryan Hardy assigned to keeping it safe?

Next thing we know, Miranda is sneaking into a house with her gun drawn. On a desk, she finds schematics for doing stuff with bombs and computer monitors with video feeds from Alex’s apartment, Shelby’s apartment, FBI headquarters, etc. And when someone enters behind her, she faces him and says she knew he was behind it the minute that footage showing the bomb in the FBI parking garage was leaked to the press.

Yep, it’s Liam. He’s got the nuke in, like, a reusable grocery bag, and crazy eyes on fleek. “Why are you doing this?” she asks. “To make things right,” he says, after shooting her.

TWO FOR THE ROAD? | Back at Quantico, it’s almost graduation time — but the twins will miss the ceremony, because they’re going to infiltrate the terrorist cell earlier than previously thought. Raina has cold feet and calls Simon, who pitches a life (perhaps a shared one) where they make the world better by working for the private sector. She waffles. Nimah says her sister has to make her own decision, and… sorry, Simon.

At the last minute, the Amin sisters’ handler says they’ll be at graduation, after all: The cell op is going to wait a week. 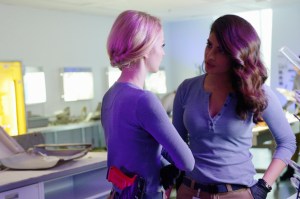 MISSING MOM | A letter actually from Shelby’s mom — and not a fake from Caleb — sends her on a mission to lure her parents into the United States with a fake immunity deal so they can be prosecuted for their crimes. Alex and Caleb both find out, with the latter visiting Mrs. Wyatt first and telling her to run and leave Shelby alone. But neither of them know that Clayton is helping (though, if so, why didn’t he just procure a fake immunity agreement rather than make the NAT do it herself?).

Anyway, by the time Shelby arrives at her mom’s room, she’s gone. And when Alex later finds her back on campus, the blonde is very unhappy with Ms. Parrish. “You want to talk about a mistake I will spend the rest of my life regretting? How about meeting you?” Shelby spits, kicking Alex out of her room, and it occurs to me that these two break up more often than Alex and Ryan do (though this is the reason they don’t like each other at the beginning of the season in the future storyline, or so I hear).

SOUL CRUSHER | During the week’s lesson — how to deal with the aftermath of a terrorist attack — Alex becomes privy to some information from her father’s handler during the Omaha bombing: In an attempt to move the Nebraska terrorist group they infiltrated to do something illegal, Alex’s dad and Liam provided the bad guys with the blueprints that helped them get the awful job done at the federal building.

When Ryan confronts his boss about it later, Liam sounds contrite and guilty, noting that Alex’s father wanted to come clean about what happened, but “they” wouldn’t let him. “I thought Chicago was a mistake, but it was a pattern,” Ryan says, refusing Liam’s offer of a job in D.C.

Later, Alex proposes a two-week getaway with Ryan before she starts her job in New York and he starts what she assumes will be his new gig in Washington. He looks happy and sad at the same time, and doesn’t set her straight about his next assignment.