Need to catch up on last week’s episode? Read our recap here.

If you soaked an arrowroot cookie in skim milk and then dusted it with chalk, you’d get close to how bland I’d assumed Quantico‘s Drew was, through and through. So color me surprised by this week’s revelation — that the former NFL star is the terrorist who’s been playing Alex and her friends this whole time.

Color me a little disappointed, too — I’d hoped that the person behind The Voice would be someone from Alex’s original group of NATs and not one of the add-ons introduced mid-season. But the fact that we’re not yet at the finale makes me suspect that Drew isn’t acting alone, and that subsequent week’s revelations will bring someone else into the fold. Simon? Brandon? Liam? A not-really-dead Natalie? Your guess is as good as mine.

Back in the Quantico timeline, the recruits take a trip to a field office where they’re worked like Black Swan interns. Read on for the highlights of “Drive.”

BOOTH IS BUSTED?! | Ryan, Nimah and an FBI team in tactical gear storm Alex’s apartment but find nothing, save a wrung-out Caleb chilling on the couch. As they bring him in for questioning, Alex hangs out across the street from the church where Will told them about the bomb. Agent Parrish called in an anonymous tip six hours before, but it looks like the law enforcement officers combing the building aren’t finding anything. I question the wisdom of Alex — once more a target of the FBI — hanging out so close to a crime scene, but then I realize she’s got her hood pulled up again, which ranks just below one of those Mission: Impossible latex masks on the effective disguise meter. All good, folks! 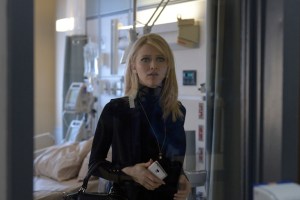 In an effort to find Simon, Shelby hacks some hospital databases and finds a John Doe matching his description in a nearby ER. But when she and Alex arrive, they find a radiation-burned Drew in the bed. “Is it over?” he asks. “Did you get him?”

He’s referring to Ryan, and as we get Drew’s catch-up story, it sounds like The Voice threatened him into renting the van that was used to transport Alex to Grand Central for the first bombing. It also made him drive the nuclear fuel core to a Yonkers warehouse two days ago — and Ryan was there, Drew says, holding Will captive. He gives her a flashdrive he promises will help decode Ryan’s computer passwords, then begs her to use it before it’s too late.

A RUMBLE WITH RYAN | Via her family’s software, Shelby causes computers in the bureau’s New York field office to overheat, causing the smoke detectors to go off and the building to be evacuated. Alex uses the chaos to slide right in and plug the drive into Ryan’s laptop — of course, that’s exactly when Ryan finds her. They have a knock-down fistfight that ends when she mentions Natalie’s death and realizes from his gobsmacked expression that he didn’t know his ex was pushing up daisies. Just then, she notices that the flash drive isn’t decoding passwords… it’s dumping documents onto Ryan’s machine. She finally knocks Ryan out, handcuffs him to the desk and runs.

DREW: WHO KNEW? | A call from Drew in his regular, undisguised voice outs him as the big bad. He gleefully admits that the drive was designed to make it look like Ryan was the bomber. “It was you or him. You already planted the evidence. Now all you have to do is support the narrative,” he says, directing her to Ryan’s truck in the garage underneath the building. The nuclear core is in the passenger seat, and she’s instructed to grab the keys and drive. So with Ryan and Miranda in hot pursuit, Alex speeds through the garage and heads straight for the (blocked) entrance. And when Shelby gets Alex’s text that the terrorist is Drew, she rushes back to his hospital room… which is empty.

‘WELCOME TO THE BOX’ | In the Quantico timeline, the NATs practice fighting in a small space (which we see echoed in the tussle in Ryan’s office), with Ryan doing some impressive Spider-Man-type wall-walking he says saved his life during two tours in Afghanistan. Intrigued and highly flirty, Alex tells him she plans to find out everything she can about him, and the two make a dinner date for two weeks from then, when she’ll no longer be a student.

Caleb is back, and he is a topic of discussion between a suspicious Shelby and Iris in the locker room after the training. (It should be noted that Shelby wears no fewer than three prom-worthy hairstyles in the first five minutes of the Quantico scenes.) Iris also wants to know why Shelby has changed her field assignment preferences to Buffalo, Milwaukee and Cleveland; the blonde answers that all of those places are a quick drive to the Canadian border, which will make it easy to rendezvous with her fugitive folks.

Upon hearing this, Caleb asks Iris to change Shelby’s mind: He’s the one who’s been writing letters to Shelby, posing as her parents, in order to save her from the knowledge that they’re greedy jerks. He maintains that he loves her, and he really doesn’t want her to throw her career away by languishing in a sleepy field office.

FIELD TRIPPIN’ | The lesson of the week involves sending the NATs to FBI field offices to get a sense of the job (read: do gut work that the regular agents don’t want to do). There’s a lot of malarkey that goes on, so I’ll shorthand it: Alex thinks she knows better than a seasoned agent, and Brandon gets hurt because of it (though everything turns out OK); a randy Nimah nearly ruins the twins’ future with the FBI but then she fixes everything — possibly with sex — so that they get assigned to infiltrate a terror cell in Queens; and Ryan’s patriotism is called into question when one of the agents he worked with in Chicago accuses him of helping the terrorist cell they were tasked to bring down.

Meanwhile, Shelby of COURSE finds out about Caleb’s subterfuge. “You think lying to protect me makes you a man I want to be with?” she asks tearfully. Later, she calls Clayton Haas and confesses that her parents are alive “and I need you to help me bring them and their crimes to justice.”

Now it’s your turn. Did you suspect Drew all along? Do you think anyone else is working with him? Did you pick up on the Donald Trump jab in the episode? Sound off in the comments!