Or, at least, that’s what she says in this week’s episode, which finds Shelby teaming up with Alex to outsmart the person/people really behind the bombings. Unfortunately for Will, though, it looks like they’re a little too late. As in, “My skin is about to fall off my body, so far advanced is my radiation poisoning” too late. Because yeah, the show’s vague villain now has a nuclear bomb at his/her/their disposal.

And back in the pre-graduation weeks at the academy, it’s time to pick a specialty. Read on for more about “Fast.”

WELCOME BACK, WYATT | Let’s do the present timeline first, because poor Will may not last much longer. Caleb wakes up in the middle of heroin withdrawal and wonders why he’s chained to the radiator in Alex’s bathroom. “You asked me to,” she gently reminds him. She leaves him to go to work — didn’t she flee the FBI last episode when Ryan and Nimah were on to her? Did I miss something about why it’s safe now for her to go back? — which prompts Caleb to make a call. “She left,” he says, but we don’t see who’s on the other end of the line. “I tried to stop her.”

Agent Parrish arrives at work to find Shelby (!) sitting in the center of it all, overseeing a systems upgrade as a civilian contractor (her family’s company makes the software). Alex is all, “No! Terrorist! Stop!” But Miranda doesn’t want to hear it. Still, Alex’s accusations worry the boss enough that she halts the upgrade, giving Alex time to talk to Shelby and her side bangs.

DASH DOT DIE? | Though Shelbs acts very antagonistic toward her former classmate, Alex notices that the blonde is tapping out something in Morse code with her finger: “I’m on your side.” When Shelby’s story checks out, everything goes back to normal; the two friends meet in the stairwell for a secret check-in, and it goes something like this.

The terrorist contacted Shelby and said Caleb would die unless she rented a van under the name Mark Raymond and drove to the spot where Alex saw her. The Voice, as she calls it, is actually all of their classmates’ voices “braided together” and run through a server in the FBI’s New York headquarters; by installing the upgrade, Shelby explains, she can monitor what’s going on and perhaps track the terrorist down. Oh, and she and Caleb are working together. “I really missed you,” Alex says. They hug.

Later on, The Voice calls Shelby. “What were you doing in the field office today? If I find out you screwed with me, I’ll make sure you die first,” it threatens. Her software doohickie traces the call to an address in East Harlem.

It’s a church, and Will’s up at the altar, begging them not to come any nearer. “I’m sick. I don’t have much time,” he cries. “I helped build it with my own hands. You have to find it. You have to find it fast.” He collapses, he bleeds, it’s gross. And it seems like things are much more dire now, eh?

This also might be a good time to mention that Natalie’s mom finds Ryan to tell him she hasn’t heard from her daughter in a while. When Ryan goes to his ex’s place, all of her stuff is still there. Color him suspicious…

SISTEMICS SHUT DOWN! (KINDA) | Back in the Quantico timeline, it’s the academy’s equivalent of career day: Various departments in the FBI come to the school to pitch their specialties to the almost-graduates. Will is missing — the story is that he got jumped by thugs on his morning jog, but Shelby knows the truth… and Iris suspects something nefarious — and Caleb is on leave for a “family emergency.”

Shelby once more decides to rush into Liam’s office and throw Caleb under the bus, saying that he’s in a cult and “a danger to all of us.” But when her complaint gets no traction, she shows up at the Sistemics mothership and gets past the receptionist by offering an opening donation of $500,000. Once inside, she runs into Caleb, who informs her he’s on an off-the-books, undercover operation sanctioned by his dad, and his Mark Raymond glasses contain a camera he hopes will catch the leader admitting to planning that courthouse bombing way back when. She leaves. 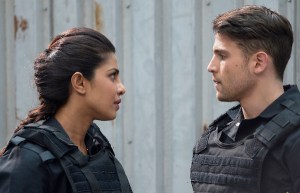 Long story short, Caleb does get the damning evidence he needs, but the worst that happens is that Sistemics loses its tax-exempt status. That’s huge — stripping Scientology of a similar status is essentially the central point of the excellent Going Clear documentary — but it doesn’t seem like enough to Caleb. “Nobody’s gonna even know what I did,” he sadly says to Clayton. “I’ll know,” his dad replies. Later, Clayton snows Shelby by telling her she saved Caleb’s life, explaining his son’s absence by saying he’s being “deprogrammed” and then offering her a job in his office after graduation.

NO GREAT SHAKES | Drew’s hand tremors return, and when they nearly cause Alex to fall off a building during an exercise, she tells Ryan. They confront the former NFLer, and he leaves the program. Again. Meanwhile, the twins are assigned an old-school (read: kind of jerky) handler who warns them that they’re being pigeonholed; when Islamic terrorists are no longer the FBI’s biggest problem, he reasons, Raina and Nimah will become obsolete.