It might take more than stitches to sew Grey Sloan back together after this week’s Grey’s Anatomy. But, according to Kevin McKidd (Owen), who directed the episode in which Arizona won custody of her and Callie’s daughter, it isn’t all heartache and side-eye ahead. Here, he discusses with TVLine not only the aftereffects for the divorced moms but also the good time that’s in store for at least one couple.

TVLINE | The scenes in which Callie and Arizona took the stand almost hurt to watch, the emotion was so right there. How did you prepare?
Yeah, I thought they were amazing, and really, the whole episode is really leading up to those two scenes. Jessica [Capshaw, Arizona] and Sara [Ramirez, Callie] really knocked it out of the park in those moments. [To prep,] we talked a lot about their [characters’] backstory and where they were now, and we also talked to one of the writers, who used to be involved in family law. She explained the protocol to us and how these things go in the real world. That really helped Sara and Jessica key in to the kind of high stakes of the situation. 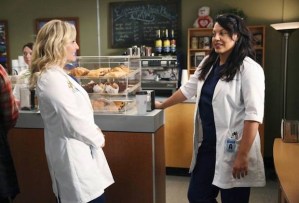 TVLINE | What’s the aftermath like for Callie and Arizona? For the moment, at least, they still work together. That’s gotta be… what’s worse than bad?
Yeah, they try to be professional, but it’s hard when there are hurt feelings like that.

TVLINE | Besides the lovely “payoff” to this story that you mentioned coming down the line, is it safe to assume that we’ll be getting a little more “happy” from other characters — like, say, Owen and Amelia?
Yes. We finally start to get to really enjoy each other, which is a blast to play. Caterina [Scorsone, Amelia] has a blast exploring that levity, because [our characters] get on like a house on fire, so it’s really nice to be able to play all that real affection and step away from the angst.

TVLINE | For the moment, at least.
I’m sure that will come back, but at the moment, they’re in a good space.

What did you think of this week’s episode? Are you looking forward to fewer tears and more laughs from Owen and Amelia?