Is Castle packing his bags? Has Once Upon a Time‘s Belle been tainted? Will an Arrow fave bring sass to The Flash? When will ABC spill more Secrets and Lies? Read on for answers to those questions plus teases from other shows.

Among the many rumors about the future of Castle, one of the craziest I’ve seen is that next season will follow Rick in L.A. (months after Beckett’s death), with a new love interest played by Summer Glau. Any truth to this? —Abby
What’s the saying — live by the sword, die by the sword? Sources tell me that the same budget cuts that allegedly led to Stana Katic and Tamala Jones not being asked back for Season 9 also have thrown a wrench in any plan to “move” the characters out of New York City, seeing as a whole buncha new sets would have to be built. So the smart money has Rick and… whomever… staying put in the Big Apple, in the event of renewal.

Any scoop on what will happen next between Grey’s Anatomy‘s Maggie and Andrew? —Semaj
Sounds like a reunion is out of the cards. Speaking with TVLine, Kelly McCreary all but confirms that the ex-lovers will remain just that, although she does hint that there may be some unresolved feelings in the wake of their “abrupt” split. “We haven’t watched either of them process any emotions about it,” McCreary muses. “So, I guess it remains to be seen whether it’s just a done deal … or if there’s some residual stuff to come along.” Regardless, Maggie walks away from the experience a better, more open-minded person, believes her portrayer. “Andrew made her do things to stay in the relationship that made her very uncomfortable — she really had to break out of her comfort zone,” she shares. “Ultimately, it opens her heart up a little bit more and it opens her mind up a little bit more. And that’s a great takeaway.”

Once Upon a Time’s Belle said she tainted her soul because she saved Rumple. Does she regret it? Does protecting oneself or family really taint their souls? —Rebecca
I hand-delivered, as I do, your salient Q to the series co-creators, and Eddy Kitsis answered, “Belle is very distraught because she did something that she never ever really wanted to do,” accidentally damning ex-fiance Gaston to the River of Lost Souls. “In that moment, when it was life or death, she chose Rumple, which obviously says something — but whether she wants to admit it or not is another situation. She doesn’t like being put in that situation and she’s upset that she couldn’t figure a way out, because she reacted in a moment and now has to deal with that for the rest of her life.” As for whether having “tainted” her own soul a smidgen might help foster an eventual reconciliation with her Dark One husband, since Belle now stands on less-high ground, Kitsis says, “We are going to have to wait and see what happens to her.”

Will Longmire be renewed by Netflix? —Joann
Not only was the A&E castoff renewed some time ago, I have fresh intel for you — namely, that Season 5 is currently casting some Irish crime family members whom Walt will take an interest in with regards to a drugs-related murder. 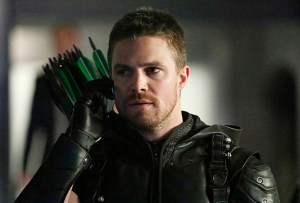 have never been very cliffhanger-y; they tended to be more like a closed chapter. Will that trend continue with the Season 4 finale? —Lauren
Seems so. Showrunner Wendy Mericle says approaching the May 25 closer “was less about plot and more about unanswered questions about character stuff. We’re going to take the team to a pretty dark place [so] it’s much more about, ‘Where are we going to pick these guys up?’ [in the fall]. The character arcs that we built this season, we knew exactly where we wanted every character to end, and it was in a very sort of morally grey place. So they’re asking themselves some pretty profound questions.”

On Game of Silence, will Gil and the warden come face-to-face again soon? —Vanessa
You can absolutely count on a “reunion” for grown Gil and the former Quitman warden, and it will be a big moment.

Hit me up with anything Bones, please. —Carrie
This Thursday’s kick-off for the show’s new serial-killer storyline is an homage to the classic X-Files episode “Home.” Among the Easter eggs to be on the lookout for: “The mixtape the killer leaves behind is titled ‘Home,'” reveals exec producer Michael Peterson. What’s more, in the X episode “you hear Johnny Mathis’ ‘Wonderful, Wonderful’ play while the brutal murders are going on,” reminds Peterson. “We do a nice little nod to that with the song ‘Buffalo Gals.'”

Got any Grimm scoop? —Jen
As the season finale approaches, don’t assume that the imminent Wesen uprising is necessarily calling for Nick’s head. “Black Claw would just as soon have Grimms on their side,” explains co-creator James Kouf, who wouldn’t go into detail about how, exactly, the rebellion plans to secure Burkhardt’s loyalty. “Grimms represent more power for them,” he adds, “so it could be sticky for everybody.” 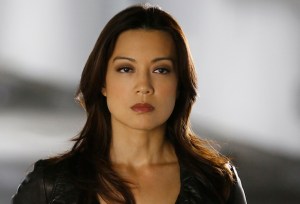 any hints as to what May will be doing in the remaining episodes? —Susan
This week, May is (very) begrudgingly put in the (very) difficult decision of possibly determining an Inhuman’s fate, ultimately leading to an overdue heart-to-heart with Coulson. On the (much) lighter side, she is involved in one of the series’ very best visual gags ever. And I mean ever.

Do you know anything about the episode of The Flash that Katie Cassidy will be guest-starring in on May 17th? —Jill
“Like most of the Earth-Two metahumans, Black Siren is under the thumb of Zoom,” EP Todd Helbing tells me. That said, “She’s a very powerful metahuman,” EP Aaron Helbing notes. “She is sassy, strong and capable…. Katie really nailed the performance.”

How was The Flash’s Barry able to “run” to and from Laurel’s funeral (in the Arrow flash-forward) if he lost his speed on The Flash? —Ellen
When crossing over elements between the CW’s DC superhero shows, “Sometimes the schedules don’t line up exactly,” Flash EP Aaron Helbing laments. “Schedules change, and that stuff is out of our control.”

A lot of Legends of Tomorrow fans thought that Sara Lance would learn about Laurel’s death in last week’s episode. When she will discover it? —CLBT
Yeah, there apparently was a “miscommunication” out there, suggesting that Sara would learn of her sister’s death during the April 21 Paul Blackthorne crossover. Which obviously didn’t happen. But the truth will come out, probably in the season finale that takes the Legends back to 2016 (I am betting).

Anything on this season’s final episodes of Chicago P.D.? —Claire
Remember how we told you that Lindsay dissuades Halstead from purchasing a home of his own? Well, “just the simple act of [Halstead] looking for a place to buy really activates her in a way and makes her want to maybe get a little more definition on the relationship,” reveals exec producer Matt Olmstead, adding that the creative team “wanted to get back towards the heat” between those two characters. In related news that should please “Linstead” ‘shippers: There are no plans right now to bring back Charisma Carpenter’s lawyer-turned-marijuana dispensary owner.

You always have the 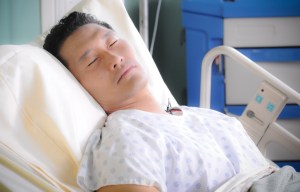 best Hawaii Five-0 intel! Is there any little nugget you held back from the amazing Fall Finale preview? —Belle
Of course I hold things back. I have mouths to feed! In describing how the two-hour finale (airing May 13) leaves things, showrunner Peter M. Lenkov says to expect “smaller cliffhangers, the same way we did last season. It’s not ‘one big jeopardy’ for our people, it’s more sort of storyline cliffhangers, like we did last year with Gabriel.”

Long time no Chicago Med scoop. Fix this, stat! —DJ
Connor’s sister Claire (guest star Christina Brucato) returns this week, but will her brother want to see her? The doc is “dealing with the past, what happened to his mother and that he blames his father [for her death],” exec producer Diane Frolov explains. “He has a hard time really being around his sister because she doesn’t feel the same way. That episode is about his evolution. It’ll be coming off a case…that’s going to help him resolve his issues.”

Will we see NCIS‘ Gibbs 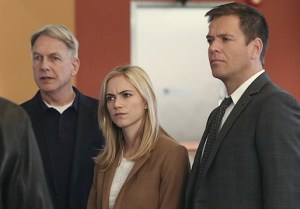 go back to wearing a polo shirt and white T-shirt? —Serena
The mail I got on this topic! I therefore simply had to run it by show boss Gary Glasberg, who acknowledged that Gibbs’ new, more polished look, which he adopted in the wake of cheating death, “was a nice change for us.” That said, “At some point it wouldn’t surprise me if he switches back to the older wardrobe.”

How did it come about for Michelle Obama to make an appearance on NCIS? Was this something specially written for her?—Ozarkat
NCIS boss Gary Glasberg told me that he and his team were already aware of FLOTUS’ Joining Forces initiative when “the opportunity came up to do a storyline that sort of spoke to it and what they offer. And when we started to talk about it, because of the First Lady’s significant involvement, they wanted to participate.” Interstingly, the original plan was for Obama to visit the show’s set, but when scheduling issues got in the way, “To quote what was said to me, they asked, ‘Would you like to come and film in their house?’ which was fantastic,” in part because no other filmed TV production had ever set up shop inside 1600 Penn. “This was never done before,” says Glasberg, “so it was a dream for many of us.”

Any scoop about Lola’s future on Reign? —Michelle
In the coming weeks, Lola and Elizabeth will find themselves becoming unlikely allies and confidants.

Is there any chance that ABC will eventually schedule the second season of Secrets & Lies? Has it been filmed to completion yet? —Denny
The latest buzz is that Season 2 — which stars Michael Ealy, Terry O’Quinn, Jordana Brewster and the returning Juliette Lewis, and wrapped production in early December — might but not find a spot on the airwaves until fall.

Real questions, real answers. If you need the Inside Line on a favorite show, email InsideLine@tvline.com!  (With reporting by Kim Roots and Vlada Gelman)