Recent speculation about an upcoming NCIS episode was (politically) correct.

Confirming what was reported earlier this month, CBS announced Thursday that First Lady Michelle Obama will make a guest appearance on the procedural’s May 3 installment.

In the episode — which centers on a 14-year-old who foils a home invasion — FLOTUS will welcome Gibbs and the wife of a Marine (played by 24‘s Reiko Aylesworth) to the White House for a roundtable about Joining Forces, the real-life initiative that calls on Americans to provide support for service members, veterans and their families.

Check out a photo from the First Lady’s guest spot, which was filmed on location inside 1600 Penn: 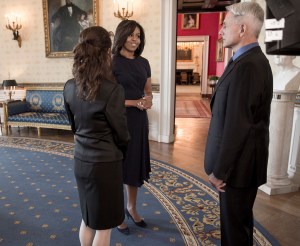 * CBS will air two more colorized episodes of I Love Lucy — “Lucy Visits Grauman’s” and “Lucy and John Wayne” — in a one-hour special on Sunday, May 22, at 8/7c.

* A marathon of all seven seasons of Parks and Recreation will air on Esquire, beginning this Friday, April 22, at 7 am ET.