Well, maybe not so much “prodigal” as “troubled” and “prone to handing out nicknames like he’s the second coming of James ‘Sawyer’ Ford.”

And maybe not so much “returned” as “been revealed as stashed away in his mother’s mansion until the election cycle is over” and “using heroin to cope with being a terror victim.” But you get the gist.

Yep, the missing Caleb Haas is back in the ABC drama’s future narrative this week, but that’s about the only positive thing I can say about him. Drawn and sad, with an awful new addiction and a metric ton of survivor’s guilt sitting on his shoulders, this Caleb isn’t the snarky Abercrombie model we used to know. And, based on the last few moments of the episode, he’s got at least one more major secret buzzing about in that towhead of his.

Elsewhere, Will receives a beat-down from a surprising source, and not even banging Liam once more can stop Miranda from getting fired. Before the Systemics goons come get me, let’s review the highlights of “Soon.”

ALEX HITCHES A RIDE | Though none of her co-workers at the FBI still know exactly what’s she’s up to, Alex is freaking out that she hasn’t been able to reach Will or Simon since they hopped into the terrorist’s carpool. (Side note: Given Shelby’s appearance at the close of the last episode, is the overarching evil mastermind an überterrorist, or just a terrorist Uber?) A friendly tech at the bureau helps Alex by telling her that the car was rented under the name Mark Raymond; a minute or two of searching the internet reveals Caleb’s fake social media profile.

What Alex doesn’t know is that Nimah and Ryan are spying on her, remotely viewing her desktop from Ryan’s office. They assume the Mark Raymond profile is to protect Caleb’s privacy while his mom is running for office, and they then make the leap that Alex holds a deadly grudge against Claire Haas for publicly doubting her during the bombing hearings. For two people who’ve been trained to examine every possible angle of a case, don’t these conclusions seem rather quick and easy?

Alex recruits Raina, who is at home with her family and no longer working for the bureau, to pose as Nimah and distract Ryan. But it fails in spectacular fashion; at least Raina is able to fire off a text warning Alex to run. Soon after Agent Parrish leaves the building, she’s picked up by a black SUV with a very ticked-off vice-presidential candidate inside. 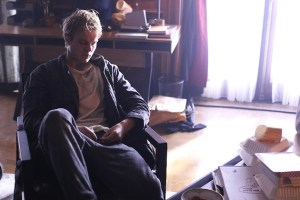 ROCK BOTTOM | Claire escorts Alex to her home in Georgetown (side note: that’s a LONG drive from Manhattan), where she unlocks a room to reveal Caleb, who’s clearly become a heroin addict since last we saw him. The question his current freefall keeps coming back to: Would Clayton Haas had survived the second bombing if he hadn’t gone back into the rubble to save his son? Caleb cries and Alex vows to help him, but even in his depleted state, he can see that she’s a hot mess and a half.

Claire guiltily notes that she’ll check Caleb into rehab in “just four more days” — aka when her campaign is done — and Caleb reminds Alex that he’s no longer in contact with Shelby, then the visit is over. Or is it? While Alex is waiting outside for her ride back home, Caleb appears and says he snuck out and is coming with her. And when she’s not listening, he makes a surreptitious call. “She fell for it. We’re on our way now,” he tells someone on the other end of the line. “I’ll see you soon.”

RED-FLAGGED | Back in the day at Quantico, it’s time for the FBI’s comprehensive medical screening, which is supposed to help the bureau determine the fitness of its future agents but which is clearly just a really good reason for most of the NATs to remove their shirts and keep ’em off for a while. Everyone does well, then it’s on to security-clearance time!

I think the reason the NATs fill out each other’s security-clearance forms, as opposed to just filling out their own, is to get practice in asking those types of questions. But it seems a little useless, no? Sex, money and drugs are the traditional areas “where good agents go bad,” a visiting Clayton tells the class; pretty soon, almost everyone is clear — except Drew, Shelby, Raina, Iris and a few others. Ultimately, everyone but Iris is clear. Irked, she alerts Shelby to the whole Mark Raymond thing Will and Caleb are trying to pull off, but she interprets it as Caleb never having left the cult. And then Iris calls Systemics and outs Caleb and Will’s shenanigans, setting up a moment in which the cult members force young Haas to beat up Will to prove he’s not in on it. So he does. And Shelby, who’s just arrived at Systemics headquarters, sees the whole thing.

THIS IS A MAN’S, MAN’S, MAN’S… WELL, YOU KNOW THE REST | Meanwhile, Miranda is busy having her butt handed to her as she’s unceremoniously fired after the shooting at her house. Charlie is still unconscious, in case you were wondering, and Miranda is really, really mad that Liam sexed up a student but is able to keep his job. So she does what any rational-thinking woman in her position would do: She has sweaty public bathroom sex with him, complete with open-mouthed gasping, and records the audio of it — and his admission that he and Alex slept together — then brings it to Clayton… who cares not one whit. This prompts Miranda to march straight to Alex and warn her that the FBI is a man’s world. “And in a man’s world,” she adds, “men get away with murder.”