There’s a bunch of important season-finale lead-up in this week’s Sleepy Hollow, but you’ll forgive me if all I can focus on is the seemingly senseless killing of a member of Ichabod and Abbie’s army.

As you might’ve heard by now, Joe Corbin is struck down toward the end of Friday’s episode — by Jenny (!), which we’ll get to in a moment — and suffers a noble, if naked, death on New York’s Bear Mountain.

Yes, dramas need stakes. Yes, it’s naïve to think that a literal battle to save the world won’t have casualties. But to have the death of Joe, who brought a groundedness to Team WTF and a grudging sweetness out of Jenny Mills, happen while Daniel runs around the forest barking orders like he knows anything about anything?

Yeah, it burns — and the fact that the development is permanent just makes everything worse. But before we get to the big moment in question, a quick run-down of the other important stuff that takes place in the episode:

* Crane makes Abbie a cappuccino. Abbie brings Crane a gourmet donut. As they enjoy the earthly delights in advance of their trip to the underworld, she admits that yes, she’s scared, but no, he’s not going to the catacombs without her. (Aw, someone’s been reading TVLine’s TV questions post!) Also, it seems like Abbie touches Crane’s face more than is strictly necessary under the pretense of picking donut out of his beard (not as gross as it sounds, I promise); when he takes a sip of her drink, the mood between the two is decidedly cozy. 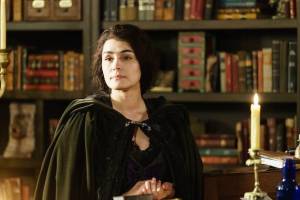 * Daniel walks into the archives during Team WTF’s confab with Pandora and is suddenly, 100 percent on the team. When Abbie protests, he says he wants to help her save the world, mainly so the two of them can have a second chance. She acquiesces rather easily, but that might be because there’s eight house between them and the possible end of the world (aka The Hidden One becoming omnipotent and destroying every living thing on the planet).

* The plan: Ichabod and Abbie will go to the catacombs to recreate Pandora’s box, while Mrs. Hidden One will stay behind and help the others stall. Joe, Jenny, Daniel and Pandora go about harnessing the power of ley lines in the vicinity of Bear Mountain, where the god has set up shop with his mystical hourglass. For some reason, Daniel thinks he’s the boss in Abbie’s absence; for some other insane reason, everyone pretty much does what he says… until Jenny doesn’t. (More on that in a minute.)

* Abbie and Ichabod get in a rowboat, sing the National Anthem and wave Betsy’s flag as they row across the Delaware. They also have a talk about how she’s his best partner ever; does anyone else think it sounds like Tom Mison says “loo-tenant” rather than “leftenant” during the conversation? Pretty soon, some mojo takes place they’re in the River Styx — which we know mainly because Ichabod tells us that’s where they are. They come across the lifeless corpses of the soldiers who accompanied Washington on his mission; one is kind of a zombie, thanks to a necklace he wears (thanks to the fiendish Gen. Howe) that curses him with immortality.

* An encrypted note from Betsy, found among the bodies, points Ichabod and Abbie in the right direction of the portal that sends them to the catacombs. They eventually make their way to a secret chamber, where they find Betsy Ross — who’s still alive. Turns out, the woman who returned from the mission wasn’t the real deal, which explains why she sent Ichabod a letter terminating their friendship soon after she came back. Two things you need to know about Betsy: She throw Abbie a little bit of a look, and she’s under the impression it’s the year 1777 in the real world.

* Back on Bear Mountain, the magic compass Pandora conveniently produced to find the ley lines is even more conveniently damaged when The Hidden One makes a storm roll into the area. If she sheltered underneath the tree from A Charlie Brown Christmas, like Jenny and Joe did, it’s no wonder the thing broke. So Joe scurries back to Jenny’s to get the coordinates they need off one of Washington’s old maps. He’s successful, but his exit from the trailer is hampered by Ezra Mills’ sudden arrival.

* All of this coincides with The Hidden One noticing Jenny about to shoot at his hourglass; in retaliation, he turns Joe back into a wendigo… right in front of Ezra’s eyes. Jenny is able to get to her dad in time, but she can’t talk her boyfriend down like she did last episode, and the Mills barely escape with their lives. But surprise! Ezra knows all about the supernatural — he has since before his daughters were born, and he was in Iraq with Nevins and August Corbin — and he has an arsenal of weapons that might help the current problem. “It killed me to leave, but it was for your own protection,” he tells Jenny, who doesn’t get a clear answer on what that means before everything falls apart.

* Sadly, the spell Ezra suggests to turn Joe back doesn’t work, and Jenny has to shoot her boyfriend in the chest to stop him from mauling her dad. Joe morphs back to himself, and from the gaping hole in his pec, you know he’s a goner. “You had to,” he says, absolving her of guilt as he tells her he loves her, and then he dies as she weeps over his nude body. (The fact that we got a definitive answer on the wendigo-pants situation is cold comfort. Literally.) Meanwhile, The Hidden One overrides the team’s efforts to contain him, and when the final grain of sand falls, he becomes an omnipotent ball of rage.

* Oh, and can we discuss how Daniel admits to Sophie that he’s been spying on Abbie for some higher-ups at the FBI? And how she’s the “asset” that was mentioned earlier this season?

Now it’s your turn. What did you think of the episode? Are you as irked by Joe’s death as I am? Sound off in the comments.