Is there a would-be Supergirl hiding on The Flash? Is a Criminal Minds doctor still in? How will a death rock The Fosters? What twisty finale does Jane the Virgin have on tap? Read on for answers to those questions plus teases from other shows.

Should Flash fans worry about being “lost” if they miss the Supergirl crossover? Will it be referenced on The Flash? —Amanda
The events of Monday’s #SuperFlash event will be referenced on The Flash, thought “a little more subtly than we were going to, initially,” says EP Greg Berlanti. Also, the episodes “kind of flip order” in that Barry’s unplanned trip is set up in the Flash episode that airs the day after his Supergirl appearance. “We’re much better at coordinating the viewing patterns when we’re crossing over on the same network,” Berlanti admits. “But when [it’s folded into The Flash], people will get it.”

Any Supergirl scoop? Perhaps for the subsequent Flash episode? —Amy
If you, as I am, wonder if Barry’s unexpected arrival in National City from another universe means that The Flash’s universe has its own Kara… well, exec producer Andrew Kreisberg wonders, as well. “We hadn’t [considered that],” he shared, when asked by TVLine about the possibility. “Any Kara that exists on Earth-1 would also have to have been an alien — it can’t just be ‘Kara Danvers from Poughkeepsie.’ But that’s the fun of the multiverse. We have a really, exciting, fun doppelganger coming up in the penultimate episode of Flash that we haven’t announced yet that’s another [instance] of, ‘That’ll be really cool.’” In other news, I am hearing that Flash fans will see John Wesley Shipp’s Henry Allen again before the season is up.

Now that Shemar Moore has officially exited Criminal Minds, are there any talks about a permanent replacement? Will Aisha Tyler be made a series regular? —LaShawna
The matter of filling the void left by Moore’s exit was of course addressed here. As for Aisha Tyler continuing on as Dr. Lewis if there is a Season 12, “That is my hope,” show boss Erica Messer told me. “I love her.”

I have a $100 bet that Jonathan Banks was the villain in Shemar Moore’s final Criminal Minds episode. Yes??? — Linda
Oh, Linda. You really should have read my Q&A from Tuesday, where Kirsten Vangsness noted that the UnSub was played by Lance Henriksen (Millennium).

Thanks to social media, I saw that Kevin Tancharoen will be directing another episode of Agents of S.H.I.E.L.D. Do you have any details about which one and/or what the episode is about? His episodes are usually very exciting and action-packed. —Susan
The fifth episode to be directed by showrunner Maurissa T.’s brother will air April 5, titled “Spacetime.” I’m spitballing that we’ll get a new clue regarding the midseason premiere’s out-of-this-world flash-forward…?

I am a huge fan of Once Upon a Time’s Peter Pan. We saw him in “Souls of the Departed,” but in what other Season 5 episodes will Pan appear? –Colin
Robbie Kay will next be seen as Rumple’s father in Episode 19, which is titled “Sisters.” 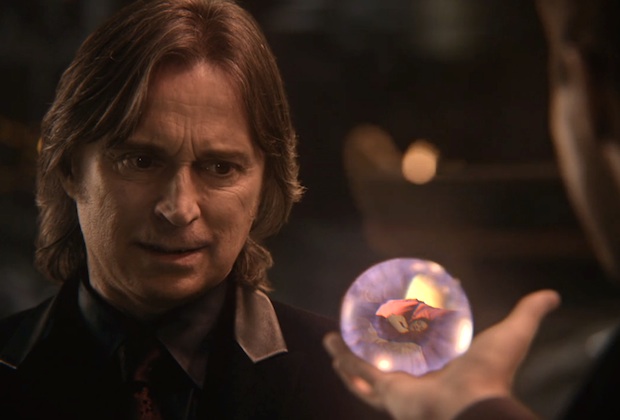 Emma & Co. find out about Belle’s baby soon? Are they willing to help Rumple save his child from Hades? —Rebecca
“However they feel about Rumple right now, our heroes will always come to Belle’s aide should the opportunity present itself,” shares co-creator Adam Horowitz. “What’s the old saying, ‘The enemy of my enemy is… Hades?'”

Anything new to share on the Prison Break revival? —Ed
With production starting up soon, the nine-episode event series is still trying to cast Mike Scofield — as in Michael and Sara’s 7-year-old son. The lad is described as “cool as a cucumber” and “far more discerning than his years,” and while Sara’s new husband Scott (Royal Pains‘ Mark Feuerstein) is the only Dad he was known, Mike “in a way worships the memory of his fallen father.” [Sniff!] Bonus scoop: For the many Kellerman fans out there, I am hearing (though it is not confirmed) that the Secret Service agent-turned-congressman is now working at the State Department.

Can you please give me some information on Jane the Virgin? —bevieg
Get ready for another one of the CW series’ crazy cliffhangers. “There’s a really great twist I’m dying to have revealed at the end of Episode 17 [tentatively set to air April 11],” executive producer Jennie Urman tells TVLine. “I can’t say what it is, but I’m so excited for it. We’ve been laying things [for it] for a while.”

I’m a loyal but confused Blindspot fan. The tooth from a few weeks ago, didn’t it say that Jane is not Taylor Shaw? —Debbie
If you’re awash in confusion, the producers have played their hand perfectly. “The tooth doesn’t necessarily mean she’s not Taylor Shaw; it means that she was born somewhere in Sub-Saharan Africa,” says showrunner Martin Gero. “So what that draws into question is: Do we know who Taylor Shaw was? Is the origin story of Taylor Shaw right, as far as Kurt remembers? But yeah, [the tooth] is a red flag for everybody. And it should be.”

Have we seen the last of Sheila on Shameless? Because that would be a real #Shame. — Josh
I just caught up on Shameless and my heart is breaking over Gallavich. Is there any hope of Noel Fisher returning, or has that ship sailed? – Candace
Two birds, meet one stone. “I think there’s a better shot of seeing Mickey or Sheila next season than there is this season” (which has only two episodes left), says EP/writer Krista Vernoff. “We’ve been talking about both of those characters in our writers’ room — we always talk about those characters, we hold them in our hearts — so hold out hope!”

Can I get some scoop on The Fosters?—Dustin
The recent death of Jude’s pal Jack will have major reverberations for the entire family in Monday’s finale. Given how important the character was to exploring the foster care system this season, his demise is very much “connected to that for Callie and the story that we see unfolding between her and Justina,” executive producer Bradley Bredeweg previews. “It adds so many different complications to that.” As for her brother, “you’re going to see Jude really kind of crumble. At that point, we will see his Fosters family rally around him to try to help him recover.”

Care to celebrate Brooklyn Nine-Nine’s early renewal with something about the finale? —Craig
Thank goodness for that pick-up, because it sounds like the Fox sitcom will leave you hanging in a criminal way. “Jason Mantzoukas’ character, Adrian Pimento, is a domino that starts knocking over other dominoes — many of them professional, but some of them personal, too,” show boss Mike Schur shares. “I don’t want to give too much away, but [the season] ends in a very exciting, unexpected way that is going to be very shocking.”

Is there going to be a Talking Dead for each installment of Fear the Walking Dead? And if so, when does Talking Dead air for the midseason finale (May 22) since Preacher is premiering right after? –Simon
Yes, a Talking Dead will be paired with each episode of AMC’s FtWD, and on Preacher’s premiere night, that after-show will come on at 11:30 pm.