If we’re reading correctly into what Game of Thrones‘ Liam Cunningham is saying, the HBO drama’s upcoming sixth season will peel back quite a few of the Onion Knight’s many layers.

That said, the actor  — who plays the aforementioned Ser Davos (aka Stannis’ wise counsel/moral compass) — excels at parceling out information in a way that must delight the spoiler-averse premium cable channel at the same time it frustrates fans and journalists hungry for spoilers: He is somehow good-natured and chatty yet shrewdly secretive, all at the same time.

“Let me see,” he says, reclining slightly in his chair on a high floor in HBO’s New York headquarters, gazing out the window at Midtown Manhattan as he considers Davos’ Season 6 trajectory. “He gets sucked into stuff that we’ve never seen him do before, against his better judgment. We will see him doing things that we haven’t seen him doing before.” He suddenly breaks into a laugh. “That’s not a sexual reference, even though it f—king sounds like one!”

The end of the drama’s fifth season saw Stannis send Davos to Castle Black to lobby the Night’s Watch for men and supplies in the fight to retake the North. When Red Priestess Melisandre later arrived alone at The Wall, she and Davos exchanged a look that communicated his worst fears: His beloved Stannis, as well as Davos’ surrogate daughter Shireen, lived no more.

In a spirited interview, TVLine talks with Cunningham about the fallout from those big deaths, Davos and Melisandre as “strange bedfellows,” a “gorgeous” showstopper of an episode (or is that episodes?) and that scene (you know the one) from the series’ recently released trailer.

TVLINE | So they’ve told me basically you can’t tell me anything about what’s happening to Davos this season.
That’s great! [Laughs] You’re going to interview somebody who’s not allowed to say anything. It’s like my father used to say: ‘If you’re talking to that guy, keep your mouth shut.’ [Laughs]

TVLINE | Obviously, it’s my job to ask.
You have to do your job. Pry away.

TVLINE | Let’s back it up a little. By the end of Season 5, Davos is so much more than he was when we first met him. Did you know going in that he was going to be a more complex character than originally presented?
Yes… I liked him because, in a sense, he’s incredibly simple — simple as in “what you see is what you get.” However, at the same time, he tells it like it is. When other people are saying that we need to do this because of this, he’d put his hand up and go, “That’s f–king bulls—t, and let me tell you why…” What I liked about it is the fact that he has very little concern for his own life.

What I’ve hung my hat on with this guy to keep him interesting is two things, really. I was a big fan of Robert Duvall from The Godfather when I was very young. That was made when I was 11. That’s how old that movie is. I loved the aspect that he wasn’t part of it, and yet he was part of it. He was Tom Hagen and the consigliere to Brando… He was never going to be part of the family; however, they would always run stuff by him — not just because he was a lawyer, because his lateral thinking skills were incredible.

Also, the other thing I loved about [Davos] was the fact of his nobility. He’s from the worst s–thole in King’s Landing, nothing going for him, couldn’t read or write, half a hand, a low-class criminal — and yet, compare him to any of the Lannisters, including Tyrion, who was a drunk and a bum. He had more nobility than a lot of them put together who had money and who had status and all this sort of thing. I kind of liked that. I still do. I liked his quiet heroism. You know what he is? He’s the kind of guy that we all want to be.

There’s so much moral gray area [in Game of Thrones] that you need a couple of characters like him and Samwell Tarly and Jon to an extent, although he’s had to do nasty things for political expediency and execute people and stuff. So [Davos is] one of the characters that’s really needed for watchers to have at least a little bit of hope in, in a sense. It’s brilliantly drawn. He’s a really cool character. 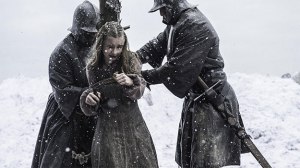 TVLINE | At the end of last season, we saw that he knows what happened to Stannis and his family.
He’s found out. Without having to hear it, he’s found out. He’s seen a face that he’s never seen on this woman before. As soon as she walked in the gate, there was trouble.

TVLINE | Is there acknowledgement or discussion of those deaths this season?
Well, I mean, it has to be pursued. The reason being, dramatically the audience has been one step ahead of that because they’ve known…So I think it’s a given. It’s not something that the writers could drop. The audience would be in Mordor if it wasn’t. I’d get the s–t kicked out of me, so it has to be pursued at some stage. Where, when, and if it’s this season? It would be mean of me to spoil.

TVLINE | In the trailer, there’s a scene where Melisandre sounds very out of character as she admits that she was wrong about what she saw. Davos is in the background of that scene.
Out of focus in the background. 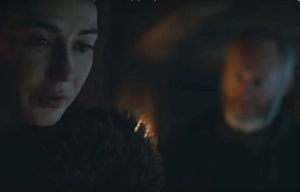 TVLINE | It’s a good thing your features are so strong. You came through.
It’s the beard.

TVLINE | Is there any possibility that those two might be coming to a place where they could be allies?
I’m throwing you a hypothetical situation here. There’s one or two things that’s going to happen. First of all, they are very, very strange bedfellows, as they say, but they are in a very weird situation. For two people who have an abhorrent dislike of each other, they’re both in the same boat. We both lost Stannis. We both lost our reason for being in the show. Also, both of us have found ourselves leaning towards Jon Snow. She has seen something in the flames about this dude. I have found, while talking with Stannis to Jon, that this guy is a fellow traveler. He’s the real deal. He’s a good guy. He’s definitely got leadership qualities, and he has a heroic and charismatic quality to him. Davos will obviously be drawn to that kind of character. Davos isn’t a leader.

So [Davos and Melisandre are] both in Castle Black, in a terrible spot in the same s—t, and they hate each other. [Laughs] It’s brilliant drama. Brilliant! What a set-up. It’s a series by itself!

I do not know what’s happened to Shireen or Stannis. As an audience [member], you’re going to look at [Davos] and assume that he’s going to assume she was killed in the battle or whatever. So to return to your question, if I found out at the end of [Season] 5 or in the break that she’s responsible for it, there’s no f–king way I’m going to team up. So you have to figure out for yourself where that’s going to go as the season progresses.

TVLINE | Now, for that other scene in the trailer.
The one at the end? [Laughs] The mic drop? 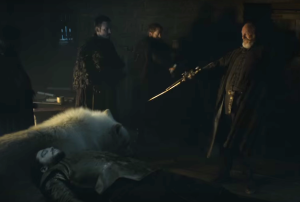 TVLINE | That one. First off, was Kit Harington good at lying there and playing dead?
I was in a great spot at the beginning of that, because a lot of girls would have been jealous of the position I was in. They’d have given me a lot of money.

TVLINE | Not just girls.
Fair enough! [Laughs] Yeah, I don’t want to be gender-…what’s the phrase this week?

TVLINE | Back to the trailer: Ghost is in the scene with Davos and Jon.
I do frequent Twitter. Somebody did accuse me of wanting to behead Ghost. Is that what you’re talking about?

TVLINE | I never thought you wanted to behead Ghost.
They saw a sword, me, and Ghost in the shot and went, “Is he going to kill Ghost?!” [Laughs] …The term “clutching at straws” does strike me. [Laughs]

TVLINE | Davos apologizes for not being much of a fighter, and it appears that he’s looking at two brothers of the Night’s Watch when he says that. Can you confirm?
Well, if you think about this logically, let me help you out here. Where we leave this, with Jon being dead, there’s still a few of his loyal people around that certain parties in Castle Black are not going to want to have around… There’s a threat implicit in the thing. I’m obviously in some way about to defend or attack or whatever it may be. It’s evidently still Castle Black, Ghost’s there. So there is a certain threat there, but who it comes from would be remiss of me to inform you.

TVLINE | You’ve said this season is bloodier and much different for you than it has been in the past. Tell me what you looked like at the end of your bloodiest day, when you came back to your trailer.
See, I’m not telling you. That’s too much. There is an enormous… There is a section as the season progresses that we haven’t tackled before, size-wise. It’s incredibly cinematic. It took an incredibly long time to shoot… I probably shouldn’t be telling you this: It’s going to blow out of the water what has happened in the previous seasons combined.

TVLINE | Tell me something else about the upcoming season that you think I need to know.
When I was reading these scripts, there’s a certain kind of bizarre new philosophy to what they’re doing. It’s different this year. There’s some very different stuff. There’s quite a few new people. There’s quite a few people going this year — as there is every year, to be fair. I’m not speaking out of shop when I say that. But I was astonished at the numbers. [Laughs] …It’s one of the things that makes the show so interesting: the fact that nobody’s safe. Anybody can go at any time.