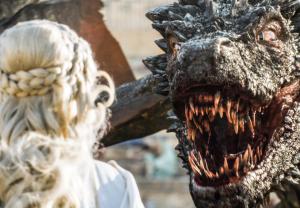 “There’s always been enough death in the world for my taste: I can do without it in my leisure time.”

While Tyrion Lannister inarguably gets the choicest line of Game of Thrones‘ second-to-last Season 5 installment, let’s be honest: If you found yourself cheering Daenerys’ dragon scorching a multitude of assassination-minded Sons of the Harpy, you probably don’t fully subscribe to his philosophy.

Episode 9, “The Dance of Dragons,” provided a flaming hot counterpoint to last week’s head-spinning, frigid, north-of-the-wall battle scene — but as with “Hardhome,” there was at least as much tragedy as there was triumph.

I mean, if you came into the episode already possessing a Jon Snow philosophy toward Melisandre — “Girl, put those things away — I am not here for your milky-white brand of crazy” — then watching her sway Stannis into burning his delightfully poetic daughter Shireen at the stake probably put the witch at No. 2 on the “Game of Thrones Waiting for Comeuppance List” just behind Ramsay Bolton. (Oh, and Stannis, you’re Top 5, too, since you barely freakin’ flinched as your little girl’s screams of agony left even your most hardened soldiers on the brink of pledging allegiance to Tommen.)

Yet while a few troubling questions sit in the back of my brain — Wait, The Dany and Tyrion Awesomeness Alliance isn’t already on hiatus, is it? Is this all there is when it comes to the Sand Snakes? And have we really gone another week without Cersei beating that Faith prison warden to death with her ladle? — this was nevertheless a pretty action-packed lead-in to next week’s finale.

Anyhow, with TVLine’s regular Thrones recapper Kim Roots on vacation, please bear with me as I try to make sense of this week’s action. (I may need a quick Google search to help me spell the name of Khaleesi’s hubby, but I know enough to know I was stoked to see him take a dagger to the abdomen. Good riddance, duplicitous dude!) 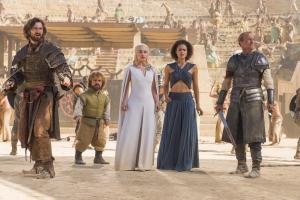 FIGHTING FIRE WITH FIRE | Daenerys swallows her distaste and oversees The Great Games — AKA Dudes Lopping Off Other Dudes’ Heads Without Sullying Their Consciences — during which she must clap her hands to signal the start of each showdown. When Jorah returns to his queen — this time, he means… to spill his guts in front of her? Who knows? — her queasiness turns into a full-fledged Pepto Bismol emergency. But then, after he goes and prevails in a six-way contest, he points his javelin toward our blonde, braided ruler and… hurls it?

Fret not, Jorah didn’t spawn a dozen “Khaleeeeeeeeesi” supercuts on YouTube by being disloyal. Turns out he’s aiming for a would-be Harpy assassin. But when that dude falls, hundreds of other traitors rise up in the arena, stabbing spectators left and right and closing in on Daenerys, Tyrion and everyone else we like in Meereen. Dany’s hubby of convenience (nah, he’s not worth Googling, is he?) dies, and just as it looks like Daario, Tyrion, Jorah and Missandei (her hand-clutch with Dany broke my heart a little) are doomed, in flies Drogon — setting Harpies ablaze like Melisandre to a lineup of non-believers. Drogon, however, may be bad-ass, but he’s not invincible, and when the Harpies’ spears begin to weaken him, Daenerys climbs aboard his back, and off they fly to… well, I’m not sure where, exactly. And I’m not sure what this means for the fate of her inner circle — after all, they were still badly outnumbered last I checked.

[Final side note: Jorah touched Daenerys’ hand? WITHOUT SO MUCH AS A GLOVE OR PROTECTIVE ARMOR? I’m just gonna go on blind faith that Game of Thrones producers wouldn’t inflict Emilia Clarke with greyscale, but seriously, what the what was with that?] 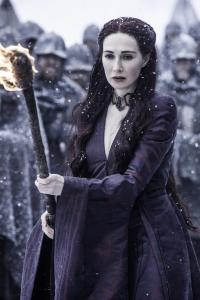 ABSOLUTE TORCH-URE | That nasty little weasel Ramsay (and his 20 men) set Stannis’ food supplies and horses ablaze — how come Melisandre never sees all this bad s–t in a vision? — leaving the would-be king desperate to make his attack on Winterfell. Stannis conveniently sends Davos off to the Knight’s Watch for backup supplies — but it’s clear he just wants to get him out of their camp so he can do The Worst Thing Ever to the Sweetest Character on the Show (TM pending).

Shireen is reading an account of House Targaryen’s woes — and she shows some surprising political insight for one so young. But her philosophizing leads Stannis to double-down on Melisandre’s madness. If a man knows who he is, Stannis reasons, he has no choice at all — he must fulfill his destiny (by turning his child into a charcoal briquette?). Boring Selyse screams her objections — but only after Melisandre has lit the fire — and poor Shireen dies for a purpose that only the Red Woman seems to really know/buy.

THE GRIMMEST PLACE ON EARTH | Jon and the Wildlings arrive at The Wall — and shockingly, the gates are opened to them without any noisy objections. Alliser Thorne says he thinks Jon’s good heart is going to get them all killed, though, and that leaves me thinking
the situation might get a little more dramatic/horrific next week, yes? I mean, there’s an actual profanity-spewing giant in the mix now! 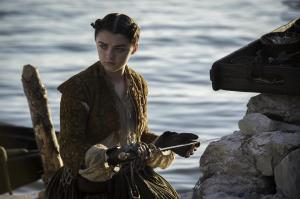 A IS FOR ARYA | Arya is off on her mystical “Oysters, Clams and Cockles” mission to kill the Seven Kingdoms’ worst bookie, but then she discovers someone on her kill list, Meryn Trant (sent to “guard” Lord Tyrell on his mission to the Iron Bank) is in town. After this, she follows her heart, or whatever internal organ has sent her into a carefully murderous rage, to the brothel where Meryn rejects prostitute after prostitute after prostitute on the grounds that they’re “too old.” He finally settles on a disturbingly young serving girl that the madame scrounges up — and it’s about as icky as 90 percent of the other icky moments of Season 5. Alas, Arya doesn’t use her bottle of poison to thwart the impeding horrors — but something tells me next week’s finale will find her learning a way to exact sweet revenge without the help of her precious Needle.

ZZZZZZZZZ | Doran Martell pardons Jaime and Bronn (though the latter loses a few teeth for his crimes), and in the spirit of keeping the peace, agrees to send Trystane and Myrcella back to King’s Landing (much to Ellaria’s disgust). Ellaria’s sole contribution to the episode seems to be telling Jaime, “We want who we want,” while her Sand Snake daughters do nothing more than play a game of slap-hand in their cell (from which they’re eventually released.) I’d have preferred 10 minutes of Brienne training Pod on proper sword technique, to be honest.

What did you think of this week’s Game of Thrones? Any predictions for next week’s finale? Sound off in the comments!