Question: Can we get some juicy spoilers on the Flash/Supergirl crossover? —Cordell
Ausiello: Look (or listen?) for shout-outs to Cisco, Caitlin, S.T.A.R. Labs and Green Arrow in the March 28 event.

Question: I am so happy Bones finally has a return date! Do you have any more scoop you can share with us about the second half of the season? —Cassidy
Ausiello: A paralyzed Hodgins has a genuine smile on his face in the first scene of the the April 14 midseason premiere, which picks up eight weeks into his rehabilitation. However, he has a tough time maintaining that cheery attitude as the hour progresses. The first emotional setback is dealt by Cam, of all people, while the second one arrives in the form of a phone call from [Spoiler]. 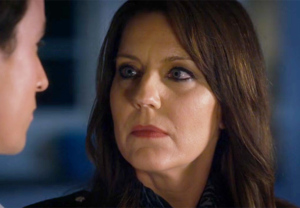 Question: Pretty Little Liars scoop? Please share! —Michael
Ausiello: Well, I hope you were a fan of all that re-coupling in Tuesday’s season finale, because things are only going to get ‘shippier moving forward. Though Freeform has yet to make a decision about whether or not the series will continue beyond Season 7, Andrea Parker — who’s now a series regular, in case you missed that update — says we’re heading into “the most romantic season we’ve ever had.” (That said, don’t expect Parker’s new character, Mary Drake, to go easy on any of the show’s couples.)

Question: Any Outlander scoop? Are they really going to go and jump 20 years into the future? —Laura
Ausiello: Starz is being super cautious about what we can and can’t say prior to the season premiere, so you’ll forgive me for being cagier than normal. What I can tell you about the first episode back: The jarring start of Dragonfly in Amber — Book 2 in Diana Gabaldon’s series — is well handled (though not, perhaps, in the way you’d think) and Tobias Menzies gives an amazing performance (though I won’t say as whom).

Question: Still collecting the pieces of my broken heart over Jane and Rafael’s breakup on Jane the Virgin, but I also have a new theory: the sperm bank screwed up, and the sperm they gave Petra did not belong to Rafael. Wishful thinking on my part? —Aviram
Ausiello: Indeed it is. Executive producer Jennie Urman already dispelled that theory to us immediately following the Season 1 finale. And while we’re at it, we’re going to rule out another fan hypothesis making the rounds: While Urman teases that there are “still more cards to turn over” in the Sin Rosetro storyline, the crime lord is definitely dead.

Question: Hello! I was wondering if you had any scoop on anything Marvel-related? Daredevil, Jessica Jones, Agents of S.H.I.E.L.D. etc. —Sami
Ausiello: At one point during the first half of Daredevil Season 2 (arriving on Netflix Friday), Matt will suffer a setback that is not only harrowing, but was also “quite tricky to film,” says star Charlie Cox, adding: “It’s probably the scaredest he’s ever been.” Might a trick taught to him by Stick pull him out of this dark new abyss?

Question: It’s been nearly three weeks since your last Gilmore Girls update. Anything new to report? —Nichole
Ausiello: That’s a bald-faced lie. Just yesterday I added a new name to our official Gilmore Girls cast gallery (it’s Slide 25). You should think twice before hurling accusations like that.

Question: I know Yanic said it was just dinner, but please tell me you know more and that this is a sign of hope for Sookie and Lorelai to be reunited. —GG4Ever
Ausiello: It was a sign of two friends meeting for a bite to eat. Nothing more. Melissa McCarthy has made it pretty clear that she is unavailable to shoot a cameo in the revival.

Question: Please, Mike, take a break from your Gilmore Girls scoop hunt and find me some good scoop on Bates Motel. —Adriana
Ausiello: Monday’s episode is a huge valentine to Norma-Alex fans. 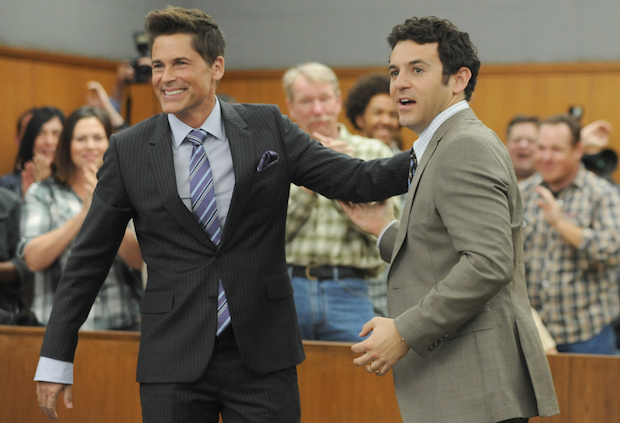 Question: Please, please, please I need professional help. What are you hearing as far as a renewal for Grandfathered and The Grinder? I have grown very attached to both and fear I might lose them. —Cindy
Ausiello: Conventional wisdom suggests Fox will bring back one but definitely not both. Here’s hoping they err on the side of the far-superior Grinder. BTW, not to sound like a broken record, but our Renewal Scorecard has all the latest pickup/cancellation buzz. You best keep tabs on it, or remain hopelessly out of the loop.

Question: Do you have any scoop on Grimm? — Jordan
Ausiello: How about some post-coital pillow talk from David Giuntoli himself? “I don’t think Nick was expecting to be intimate with Adalind,” he says, previewing what’s ahead during a recent visit to the series’ set. “The Adalind-Nick relationship heats up, the captain seems to be going to the dark side, Eve might be going to the good side — complicating the situation deeply with Adalind.” Oh, and just because the re-‘biested blonde doesn’t immediately tell Nick that her powers are back doesn’t mean he won’t find out some other way.

Question: In How to Get Away With Murder, is every Season 2 plot going to be resolved by the finale, or will there be a few loose threads? —Addi
Ausiello: Given the fact that the third leg of ABC’s #TGIT lineup has already scored a Season 3 renewal, you can’t expect all of its myriad mysteries to be rolled up like Sam Keating’s corpse in a rug, can you? That said, by the end of tonight’s hour, you absolutely should prepare for a wrap-up of the Hapstall murder mystery (and its related Caleb-Catherine-Philip craziness); a definitive answer about why Frank choked the life out of Lila Stangard; and a moratorium on secret/damning “Shooting Night” video footage.

Question: I’m very happy that Legends of Tomorrow was renewed, but I’m worried about the rumor that they are going to have a whole new cast.  I don’t think I’ll want to watch if Captain Cold isn’t in it.  Do you know with anything about the casting for Season 2? —Stacy
Ausiello: What we have here is a case of “The Telephone Game,” wherein a producer recently said, “Our team for Season 2, if not in the [physical] makeup of the team, will be changed in the way that [the characters] will be different [people]” — meaning, Rip, Leonard, Sara et al will have been changed as people by their adventures during Season 1. Regardless of whether that’s the source of your confusion, I have it on good authority that a wholesale cast change is not at all in the cards. (Psst: “This AAnd That,” at the bottom of this post, contains a bonus Legends spoiler.)

Question: Will we ever see Young Gibbs (played by Sean Harmon) on NCIS again? —Serena
Ausiello: Matt Mitovich hand-delivered your question to NCIS showrunner Gary Glasberg, and he said that “at least for the time being,” any revisiting of Young Gibbs “is on the back-burner ” given the need to, among other things, spend Season 13’s final stretch setting the stage for Michael Weatherly’s exit. Particularly from Episode 21 on, “We’re really trying to deliver on all cylinders and give everybody a bit of everything they’re hoping for for the end of the season.”

Question: Hawaii Five-0‘s Daniel Dae Kim posted a pic with the cutest little girl ever. Can you tell me who she will play? They look a little bit alike. — Lisa
Ausiello: Later this season, when wee Sara’s (guest star Londyn Silzer) mother is murdered in her own home, Five-0 hunts down the killer and in doing so discovers that Chin and the girl have an “unexpected connection.”

Question: Any Agents of S.H.I.E.L.D. scoop? —Maddie
Ausiello: It sure sounds like, given her close call with Malick’s minions in the midseason finale, Simmons might be due for some combat training. “She’s going to try to better arm herself against those situations happening again,” Elizabeth Henstridge shared during our visit to the set. Further bolstering our theory, Ming-Na Wen said that May’s “bonds with some of the less skilled but really smart characters on the show will change. She has a maternal role in wanting to protect them, because as things get more dangerous and heightened, she feels they need to learn some new skills.” 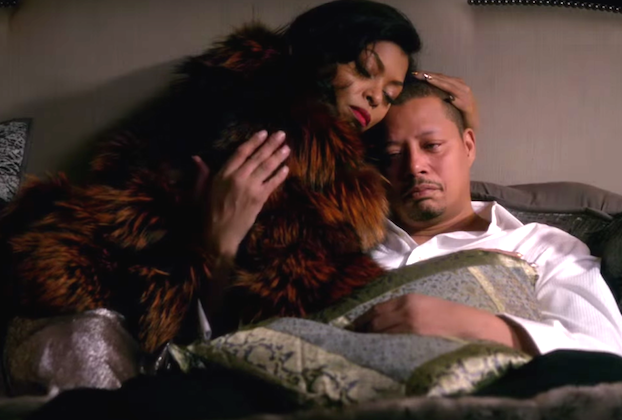 This AAnd That…
♦ Empire will end Season 2 on “a huge cliffhanger,” teases showrunner Ilene Chaiken, before cryptically adding, “someone might not be coming back” next season.
♦ House of Cards Season 4 was occasionally uneven, often illogical and consistently preposterous. And I loved every second of it. Speaking of which, am I the only one terrified of what Season 5 will look like without sans series creator Beau Willimon?
♦ Rumor has it the final scene of Legends of Tomorrow‘s May 19 season finale will introduce a “beloved superhero from the DC canon” whose mysterious agenda serves as “a launching off point for Season 2.” Theories. Comments section. Go.