We know you’ve been waiting quite a while for Rayna Jaymes and Deacon Claybourne to tie the knot, Nashville nation, but if series star Connie Britton had her druthers, the couple’s save-the-date wouldn’t even have graced your mailbox yet.

After all, the happy couple jumps right into tying the knot when the drama returns Wednesday (10/9c) — a mere episode after Deke popped the question. “I mean, in my opinion, I think we could have actually drawn it out longer and made even more of a build-up to the wedding,” she tells TVLine, chuckling, a few days before the big event airs.

Perhaps sensing the ire such a statement would cause among The First Lady of Country Music’s fans, she quickly adds, “But I thought it was great that they finally did it!” Read on for more nupitals scoop from the bride herself.

TVLINE | The fact that Rayna and Deacon are actually going through with getting married is a huge deal. I know they talked about it very seriously at the end of Season 3, but how long had you known this was really going to happen?
It wasn’t that long, actually. I probably knew as we were going into this season… We ended up just knowing that we were going to get into it at some point this year, which I was happy about.

TVLINE | Was shooting the actual wedding, walking down the aisle and all, heightened for you in any way, given how much it means for your character? Or was it just another day of shooting the show?
If I’m perfectly honest, the shooting process does tend to take away some of the real romance and glamor of those moments. [Laughs] It was certainly a beautiful day. I mean honestly, the part that struck me the most was as I was walking down the aisle. It was fun to see the reflection of everybody else’s point of view about what was happening, watching Rayna walk down the aisle. I think that the people who were sitting in the audience there — and even some of the cast members and the extras — were genuinely like, oh my God. I think they really felt like they were at a wedding, and that was really cool. 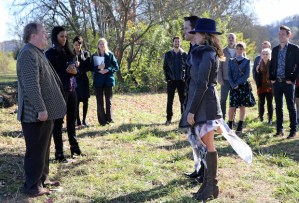 TVLINE | Did you and Charles Esten talk about how to handle the scene ahead of time?
It’s funny, because we had shot already a scene where — there’s another scene in the episode where we’re standing by a lake, and that’s where we were supposed to have the wedding. In that one, that is literally the rehearsal. I mean that was sort of the rehearsal of the wedding. It was funny because we really sort of had rehearsed it. We had rehearsed it in a previous scene. By the time we got there, it was a pretty straightforward walk down the aisle.

There were definitely moments that we wanted to try to capture. To both of us, I know, it was really important to capture the idea that this was a long time coming and both characters had really worked through a lot to get to this place. There was something very special about that.

Will you be in attendance at Rayna and Deacon’s wedding? Hit the comments to let us know!